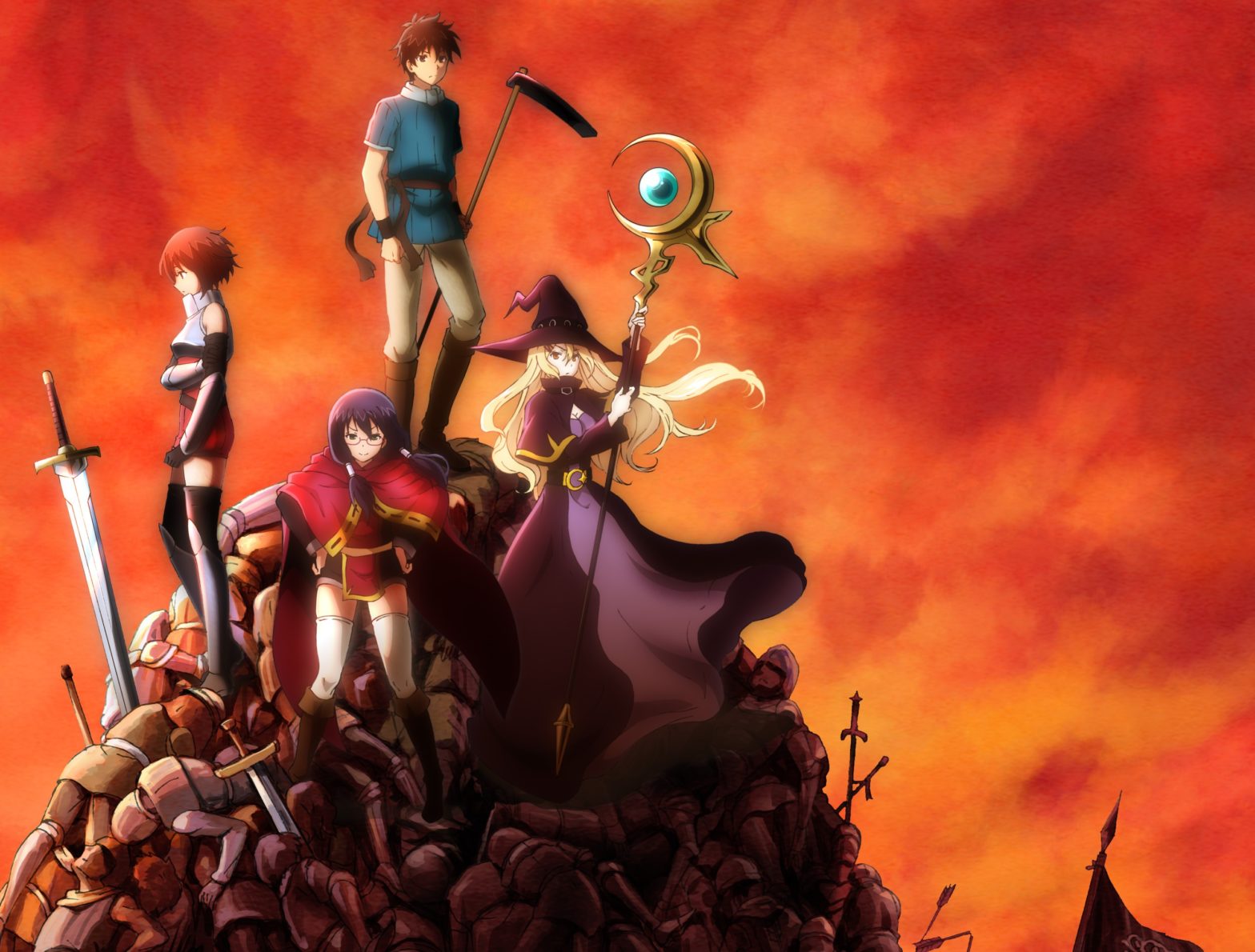 Spring has come and gone, which means it’s time to look ahead and discover what new anime you can expect to see this summer. If you’re hiding indoors from the heat like us; here are some things to look forward to. For full lists and release schedules you can check out AniChart or LiveChart. If you don’t want to go through all the trouble or wade through the immense list, I’ve got your back. In this article you’ll find some of the most notable anime releases in Summer 2021.

Based on a manga series. We follow Saltherine Aldarake, princess of the Kingdom of Aldarake. She dreams of travelling the monster-ridden world she lives in, one where humans hide behind high walls. She meets traveller Mikoto/Momotaro, a ruthless demon slayer. Although he leaves behind a trail of gore, the princess is more convinced than ever to venture out into the world and follow the steps of the terrifying demon slayer.

Based on a video game that was released just recently. It’s the Solar year 2020 and grotesque creatures called “Others” have started eating people. The Other Suppression Force has been assembled to defeat this new enemy. We follow Yuito and Kasane, who’s strange dreams get them dragged into an unavoidable fate.

My Next Life as a Villainess: All Routes Lead to Doom! X

Based on a light novel series, and already adapted into a manga and an anime. The first season of which was released in 2020. Catarina Claes hits her head and regains memories of a past life as an otaku. She realizes she’s been reborn as a villainess in the world of the game “Fortune Lover”. In which the player always winds up exiled or killed. Catarina doesn’t want the player’s paths to always end in doom and begins taking countermeasures. This of course has consequences in the game’s world.

The Case Study of Vanitas

Based on a manga series; in this anime adaptation, Noé, a vampire, travels to Paris. He’s searching for The Book of Vanitas, a human who claims to be a vampire doctor. Together, they want to heal sick vampires who cannot resist their predatory urges. An unknown force threatens them however, a force that could be responsible for the illness in the first place.

Based on a light novel series, already adapted to a manga as well. Hashiba Kyouya’s company went bankrupt, and he lost his job as a game developer. He returns to his hometown, all the while regretting the choices he has made so far. Suddenly, he travels 10 years back in time. He’s now 18 again and about to enter college. Can he make the right decisions this time around?

A spin-off of The Irregular at Magic High School, this one focuses on Miyuki’s experiences. This anime is part of a pretty huge franchise, featuring light novels, manga and anime adaptations, a movie and even video games. The story is that of an alternate world where magic exists. The protagonists are Tatsuya and Miyuki Shiba who attend the Magic High School. Tatsuya acts as his sister’s bodyguard and is considered magically inept. He’s not to be discounted thanks to his technical knowledge and combat abilities. His sister however, gets praised for her magical abilities.

Based on a manga series. Naoya Mukai, has forever been in love with Saki Saki. They finally got together and are a happy couple. Then, Naoya’s classmate Nagisa Minase decides it’s a good time to confess her feelings to him. Unable to choose, he gets involved in a love triangle. Being a high school student is hard enough as it is, now Naoya has to deal with two girlfriends on top of that.

The Detective Is Already Dead

Originally a light novel series, adapted to both manga and anime. Kimihiko became the assistant of a mysterious detective 4 years ago, when they were on a hijacked airplane together. He and the detective, also known as Siesta, went on to have many adventures together, until that came to an abrupt end. Siesta passed away, and now Kimihiko tries to return to his ordinary life as a high school student.

How a Realist Hero Rebuilt the Kingdom

This light novel series has been turned into a manga and now also into anime series. The hero, Kazuya Soma, is a student who gets summoned to a fantasy world. He uses his knowledge of realism and Machiavellianism to rebuild the kingdom. They swiftly reward him for his awesome advice. He gets crowned king, but will his administrative and revolutionary approach hold in a fantasy realm with dragons and elves?

An original anime series by studio MAPPA. This anime centres around a sport that’s not often popularized: water polo. A sport our very own colleague used to be pretty good at! Here we follow Minato, who stopped playing after an incident in middle school. Now that he’s in high school, he decides to start playing water polo again with his new team.

Based on a manga series. Ten years after Ryoma Nagare and a couple of others disappeared on Mars, the Saotome Institute created a new Getter unit to protect Earth from extraterrestrial threats. The Getter Robo Arc, humanity’s last hope. But after another Getter robo, piloted by Nagare’s son, the situation gets even more complicated.

Based on a Japanese mobile rhythm game, which has spawned manga and novel adaptations. The story revolves around the idol group IDOLiSH7, which consists of 7 male members. They each have their own unique personality and background. While struggling with the hardships of the entertainment industry, they want to become famous idols.

Based on a light novel series and adapted into a manga series as well. Rio is a poor and orphaned boy, at only 7 years old he realizes that he’s the reincarnation of Haruto, a university student. He also learns that he possesses very powerful magical abilities, which he uses to solve the kidnapping of a little girl. As a reward, he may enrol in a prestigious school for noble children.

Based on a manga series, Miss Kobayashi’s Dragon Maid’s first season aired in 2017. Kobayashi, an office worker, earned the favour of dragon Tohru during a drunk expedition in the mountains. As a result, the dragon transforms into a human girl in maid outfit, becoming her personal maid. Keeping a dragon as a housemaid certainly attracts (unwanted) attention and lands them in bizarre situations.

A light novel fantasy series, turned into a manga and anime series. Makoto Misumi was an ordinary high school student, until he got summoned to a different world to become a hero. Its goddess insults him and casts him off into the wilderness, where he encounters all sorts of fantastical creatures. He should be able to survive with his new-found magical abilities and combat skills.

Drugstore in Another World: The Slow Life of a Cheat Pharmacist

Based on a light novel series, it has already been turned into a manga series as well. Reiji winds up in a fantasy world, where he learns that he can craft potions way beyond his rank. Taking advantage of his abilities, he earns enough money to open his own drug store. He now gets to spend his days making potions for fantasy creatures.

Part of the Tsukiuta franchise, Tsukipro (Tsukino Entertainment Production) manages four idol groups. SOARA, Growth, SolidS and QUELL. You follow the careers of the idols, whose lives are overflowing with drama and, of course, music.

Aquatope of White Sand is an original anime series, which tells the story of Kukuru and Fuuka. Kukuru works at the Gama Gama aquarium; rumors have it that “mysterious things” happen there. One day she meets Fuuka, a former idol, who’s looking for an escape and a job. Together they deal with the aquarium’s secret, and its possible closure.

The Dungeon of Black Company

Based on a manga series. We follow Kinji, who has earned enough money with his real-estate investment to fund his luxurious lifestyle, without ever having to work. When a portal suddenly opens, he lands in a fantasy world where he gets enslaved to a mining company. Desperate to be rich again, he gathers an unusual adventuring party (and founds the Black Company) and sets out to earn money by any means necessary.

Based on a manga series, this anime follows Yusuke, who doesn’t care about high school. He just wants to play video games, but then he suddenly finds himself in a real-life fantasy game. Together with two cute classmates, he learns it’s not an easy life. The three of them learn they are not fighting for their own lives, but for the lives of millions.

An accompanying mobile game will be released later this year. We follow the story of Ryuuhei Oda, who witnessed the death of his brother at a very young age. Although he doesn’t seem traumatized by it as a teenager. One day, he encounters a creature called Tris, who grants him power. He’s been chosen as a “Knocker Up” to combat creatures that bleed into the normal reality of Shibuya.

Battle Game in 5 Seconds after meeting

Based on a manga series. Akira is a regular high school boy who loves games and sweets. A mysterious girl called Mion drags him into a battlefield. It’s said that the participants are involved in an experiment and have gained new powers. Akira wants to not only win the game, but also destroy the organization.

Based on a TV drama series from the 90s and a manga adaptation. The Kirihara brothers have been incarcerated in a scientific facility from a young age. When the barrier malfunctions, they escape. The story follows both them and the Kuroki brothers, who are trying to chase the escapees.

Mother of the Goddess’ Dormitory

Based on a manga series, this anime adaptation follows the story of 12-year-old Nagumi Koushi. After their house catches fire, his broke father abandons him and Nagumi roams the streets penniless. One day, he meets Minerva, who takes him to a women’s college dormitory with a reputation of housing troublesome girls. She asks him to become the “Dormitory Mother”.

An original anime series, in which no less than 36 high school students wind up in a different dimension. They gain new abilities. Some enjoy it, while others desperately are looking for a way to return home. These high school students suddenly have to fight for their survival.

The Idaten Deities Know Only Peace

Based on a manga series and turned into an anime by MAPPA. Deities called “Idaten” appeared when humanity was on the verge of extinction. They fought off the demons and saved mankind 800 years ago. Now the demons are back, and the current Idaten have no battle experience.

The Great Jahy Will Not Be Defeated!

That’s it for our hand-picked anime releases in Summer 2021. Did we miss any you are especially looking forward to? As mentioned before, this list is not by any means complete, but it should be able to keep your otaku-heart happy.