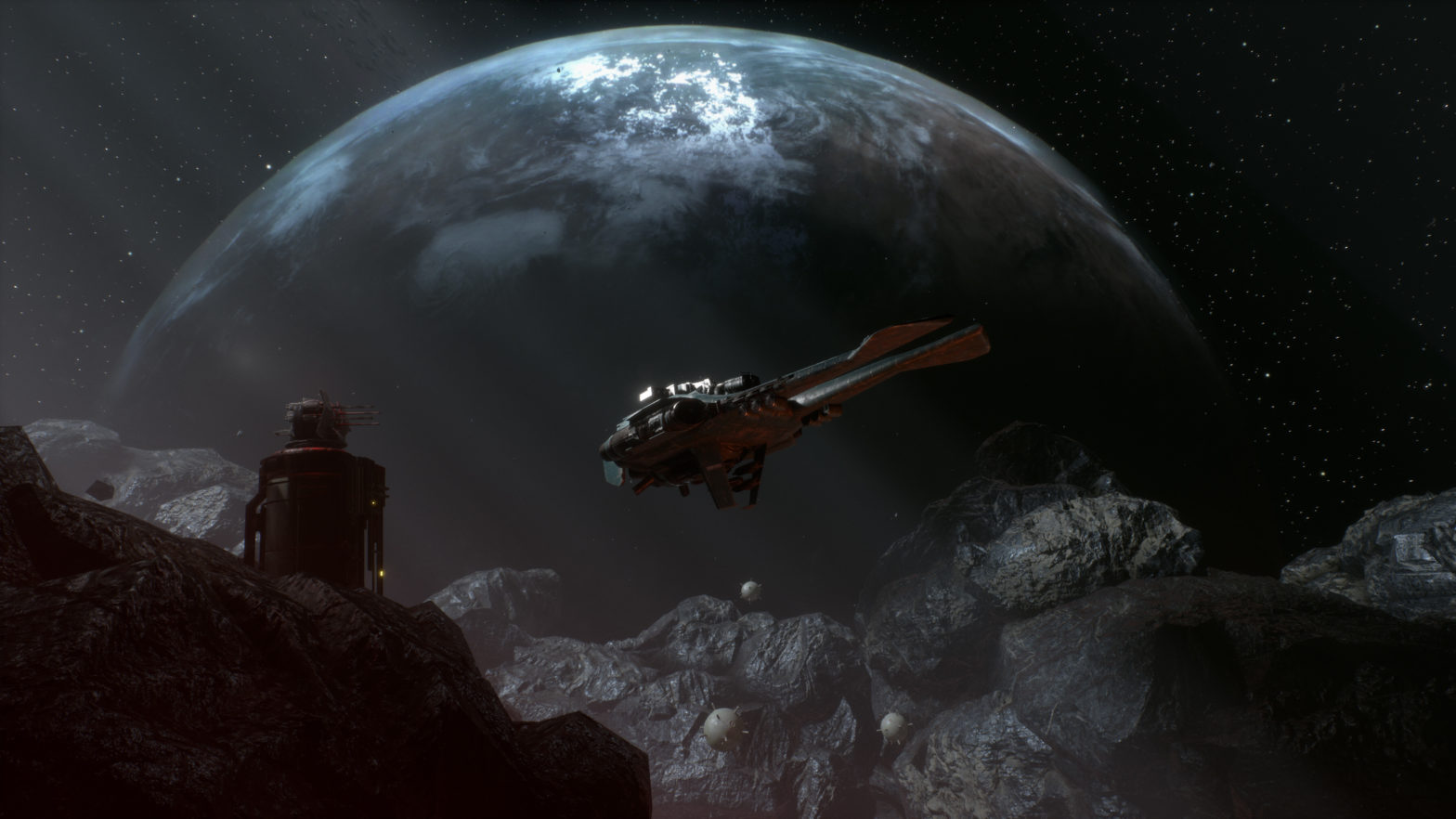 My Marauders beta impressions come from about fourteen hours of playing the last beta and eight hours in the alpha. Furthermore I would like to add that everything is subject to change, whatever I encountered this beta could change by the time Marauders releases in early access and any game breaking bugs are hopefully fixed by early beta.

Marauders flew under the radar during its alpha, I only stumbled upon it after a friend sent me a link asking if I heard about it. At that time Marauders was only available through a FIG backing project that had ended. About a year later I saw an announcement for Game Pass where Marauders will join the subscription service. Although I have a running subscription to Game Pass Ultimate (very cheap and you can too), I wasn’t going to wait. After pre-ordering through their website I dove into the four day alpha, and last week the beta.

Earth is past its breaking point and space has become lawless as the three factions are in disarray and piracy is rampant. You are a Marauder, a space pirate fighting for its survival and riches. Flying your ship to different sectors to board, loot, pillage and destroy anything and anyone in your way.

You can complete contracts for the factions and increase your reputation, unlocking more options when trading with them. Your contracts for the pirate faction serve as a kind of progression system and story. Unlocking exclusive skins and items for crafting as you complete increasingly more difficult tasks.

Marauders is a sci-fi game with all dieselpunk aesthetics, ships, weapons and locations. You will board asteroid mines, spaceports and terraforming farm stations. If you are lucky, there might be a stranded merchant cargo hauler or capital ship that can reap great rewards. That is if you survive the AI on the maps, but first and foremost your competing Marauders, who are also racing towards the loot.

Marauders aim to be a first-person multiplayer looter shooter set in industrialized deep space. You go about and load your character with gear ranging from guns to armour or go in with just a pistol and rig. Not only do you equip your character, you can build and customize the ship you enter with. Albeit the customizations on ships are only limited to engine and weapons, it’s still a neat feature.

The true tension comes from dying and losing everything. No prison wallet to stick your precious healing items or GPU in like Escape From Tarkov. No, when you die you lose it all, everything you had on you and even the ship you got. This makes every encounter intense as it’s an all or nothing fight. You could go as far as stealing the identification of another player, find their dock and make out with their ship if its an interceptor or even capital ship.

The fights are either really short or an intense battle of covering fire and flanking as you make your way through the tight hallways or huge chambers on the maps. Right now the maps aren’t that littered with loot and if you don’t focus on crafting; you can easily make a living through looting players and AI and selling off their guns.

Raids are set on an oxygen timer and when that runs out you suffocate and die. The timer is about 35 minutes and never bothered me as too short or too long. Most of the time we made it out beforehand as our small backpacks were brimming with loot.

Each raid starts in your ship and a short trip towards the main location, each raid is also randomized so you can’t choose where to raid. Flying over to the location and surviving can be tricky as you can hunt for other player ships and engage in ship to ship combat. Once your ship is dead in the waters or space, you can use an escape pod to make it out of the raid.

Or, and this is by far my most favourite feature of Marauders, take that escape pod and breach your assailants ship. Killing everyone inside and taking it for yourself. During my gaming sessions for this Marauders beta impressions article I sometimes would just load into a raid with a pistol and instantly breach pod towards the nearest ship and try to take it over. You can’t sell basic ships but it’s hella fun.

Imagine world war two in space. Shoddy, ugly, bulky metal ships with huge cannons on top. Sleek boat-like interceptors and tiny drop pods smaller than the engine hurling them through space. Not everything is pretty but it’s all functional. Even the armour and apparel items are a mix of retro and futurism, from the gas masks to the full plate heavy armours and helmets. They all have that “I kinda know that look from somewhere in history class” feel, and I liked it.

Small Impact Games is a small studio and lacks some of the resources and funding to make it look like Star Citizen. And I don’t mind it to be honest, I prefer some lower graphical fidelity as long as my performance is top notch during games. And it was, aside from an occasional crash during the beta.

The graphics look a bit older, especially on the asteroids or some of the interiors. Everything is gray and dark green most of the time which leads to some bland environments. But it all fits the setting to be honest. It’s industrialized space, not made to be pretty but to be efficient. On top of that you view everything through the visor of your mask.

And I have to admit that the reflections, dust, sweat and blood on the visor did appear pretty convincing. Lights reflected off the glass of your mask, sometimes blinding you completely from the wrong angle. Some recreational areas like the Meat shop or bar at the spaceport had neon lights and more colour for the morale of the working force you just decimated.

The sound of the airlocks opening and closing, hissing of the decompression is pretty spot on. It sounded like a two ton door being forced open and closing behind you. This is also a good cue to know another team is entering and perfect for setting up ambushes by the way.

Space doesn’t sound like space, space has no air so there should be no sound. This would be awfully boring for a game though. The cannons sound distinct and are easy to pick out, hear someone shooting a flak cannon or torpedo launcher = get out fast. The engines of the ships felt a bit underwhelming but I get why they don’t want that sound to dominate over the rest.

Getting shot while inside your vessel sounds literally terrifying, the sound of the metal being struck by a slug the size of your arm. Your screen shakes and parts fly around as the impact rocks your boat in a bad way. Escaping while your ship is being pelted is an adrenaline rush as you race towards the escape pods.

The biggest issue with the sound is that it’s all over the place. It is hard to determine where footsteps or noises are coming from. Some sounds like crouching also felt way too loud in comparison to walking.

The start of the beta started off pretty bad with people unable to download the game. Or it didn’t unlock on steam for some after purchasing. Add in disconnects and crashes in a game where you lose all your gear and ship without a way to reconnect and you have some angry gamers.

My Marauders beta impressions for crashes are pretty decent. I noticed in their discord some people had it worse than me and I don’t remember my friend even having a crash. Five crashes is the total I had and one instance where our ship got stuck in the spaceport exterior. Unable to get it out it meant it was lost, this was a scout frigate so not that expensive but not a free one either.

A long way to go

I accidentally had a dupe bug where an item kept infinitely crafting itself after I completed a raid. I was able to pick up a stock every time a raid ended. This bug was fixed on day three but my buddy ran into a duper with an infinite ammo stack. Netting him some billion in funds to spend during the beta.

On occasions I would move items around in my inventory and the item would just disappear. I had some ammo stacks and crafting materials vanish into thin air. I would be devastated if this happened to an endgame armor piece or backpack.

The maps feel kinda unfinished at some locations. Especially the new map, the terraformer, felt like it lacked some loot or containers to go to. Comparing it to the alpha I felt like the spaceport got a bit more lively. Some clutter and decoration to easily recognize where you are on the map and complete contracts. On some ships and locations I detected some missing textures, some locations feel sort of empty and thus pointless in a looter shooter.

The AI could be utterly easy to engage with or very good on some occasions. I remember my friend was shooting across the hall in the terraformer towards an AI and he got domed pretty hard over a huge distance. I got domed on several occasions as I leaned out or rounded a corner. And at times I could simply walk up to them at point blank range.

Marauders is a game with a lot of work ahead. A lot of game breaking bugs that the general public will not be happy about when the game releases in early access. And still has some work on its gameplay loop to make sure all the mechanics are worth your time. Looking at you crafting.

The team is motivated and actively looking for feedback from the community, engages in Q&A sessions and asks for weapon or loot ideas. The discord blew up to over 30K people this beta as there is a general interest for Marauders.

There is a lot of potential in Marauders but it sure isn’t perfect or ready to be released. If you buy into this now or in early access prepare to lose your gear, items and time to a bug or a complete rework of a game system.
Have a look at the Marauders website for more art and trailers or pre-order it there.
NOTE: The beta has ended, you will NOT be able to play until the next beta or early access.