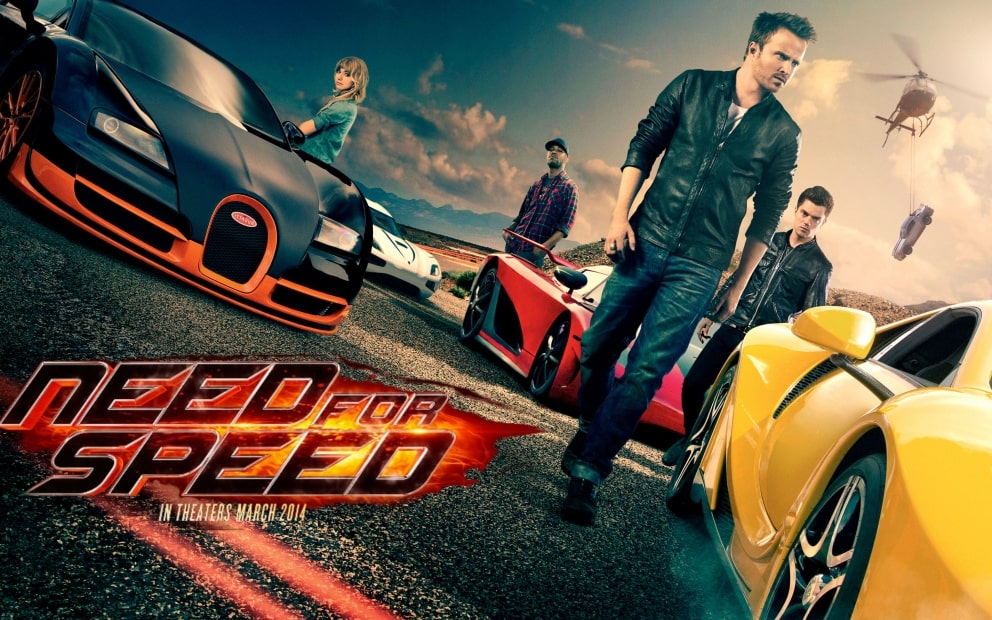 Need for Speed is definitely a favorite franchise without ever having a particular plot. We could say that it does not exist, narratively speaking. This is a series of racing games, with a clear goal, but also a fixed audience. So, from the beginning, this film adaptation was unnecessary, and a bit strange as a decision.

My expectations for Need for Speed were non-existent. Is it possible to create something out of nothing?

The orphaned and honest Tobbey tries to repay the debts of his dead father, while maintaining his crew. With the help of his company, which also happens to be engineers with different specialties, they try to restore a valuable car and use the large fee to pay off the debts. After many careless decisions and a sprinkle of misfortune, the plot turns into a story of revenge, with Toby being taken to prison.

Coming out of jail, the unjustly convicted Tobbey wants to do justice. However, his ex-collaborator and nemesis, having learned of the revenge plan of the former, files a lawsuit against him. More details here.

The classic American hero, with a dark past but a golden heart, sacrificed for the common good and that’s the problem; his character is steeped in clichés in terms of personality and predictable choices. When he is wronged we don’t feel bad, because we already know that he will be justified in the end. Aaron Paul in turn tries to get away from the beloved character Jesse Pinkman, without success. The result we see in Need for Speed is a “flavorless” Jesse.

From the name it’s apparent that this is a second-class villain. It’s obvious that the screenwriters are trying to give him characteristics that will make him disliked and, perhaps, scary. Again, they don’t succeed, since his character, apart from being harmless, looks like a caricature. Ridiculous expressions, tone of voice, kinesiology, etc. cause laughter. This probably became apparent to the screenwriters who, instead of rewriting his character from the beginning, chose to give him some “peripheral accessories” to make him hated. That is, it is no coincidence that his partner is Tobbey’s “the one that got away”. The techniques they use refer to a Latin American serial, since he is responsible for the death of Tobbey’s close friend, while at the same time the deceased is the brother of Dino’s partner.

Tobbey’s obvious love interest. A very shallow character, whose personality revolves around having a British accent. Wanting to emphasize that the film sets the right standards in what has to do with women, the screenwriters make her look like a “know-it-all” who has superficial knowledge. In other words, it seems that her only goal is to impress others (in this case men), to take her into account. While at first we could forgive the bad script, the situation only gets worse. In particular, when the action begins, her personality makes a 180-degree turn and becomes a simple follower, from an independent / dynamic woman who was previously. Disappointing character who leveled her initial prospects.

Need for Speed’s “the one that got away”. At this point the film does not even attempt to promote a dynamic female role model. Mrs. “Fifty Shades of Gray”, who of course was not known for this role at the time, managed to become the most indifferent character. Maybe this was done deliberately to intensify the opposition between her and Julia. She looked like a ghost just following her partner, without any purpose. When her beloved brother died, she seemed completely indifferent, except for the funeral. Of course, although she has all these disadvantages, she finally managed to atone and play the role intended for Julia. In short, as soon as she learned the truth, she denied her husband, and acted against him, proving that she is a minimalist feminist model in the film.

Little Pete is the one who triggered all the events of the film. From the first moment he interacted with Tobbey it was obvious that he would die. He acted as a comic relief, but there is no second character of this kind in the film and that was one of the reasons that his death had no impact. Then there are Benny, Finn and Joe who follow the clichéd patterns of every American movie. The first is the comic relief mentioned earlier, played by Kid Cudi unexpectedly well, given his status. Then we have Mr. Robot (2015) – Finn or otherwise the marginalized intellect, and Joe who is the voice of reason. Finally, the role of the “monarch” is played by the Oscar nominee Michael Keaton, whose talent was left untapped through the cartoony character he was given. In short, he accepted the job for the money and it showed.

As mentioned above, there is no particular narrative in the game to justify making a movie. That’s why, after all, we are dealing with endless action scenes, with minimal to no dialogue. Personally, the continuous sound effects, such as the grunt of the motorcycle, caused me a headache and I chose to fast forward in most scenes of this kind. Of course I recognize that it’s a personal preference and for some it may be the hidden charm of the film. The plot and the script are definitely not in the good elements, but the shots, the colors and the photography are very good.

Is Need For Speed worth watching?

It depends on the expectations of each viewer. That is, in order to enjoy it in a serious context, Need for Speed must suppress in its subconscious every element of taste and seriousness. To be honest the film is based on a racing game, without a plot and, for that there should be no requirements. It’s a good movie to play in the background or to be seen as a comedy. If you want something similar but worthwhile there is Tokyo Drift. So from us it’s a Miss.

Hit or Miss is a new series in which we examine whether old and favorite (or not) film or television productions are as successful as we think they are. Is it a real diamond after all or do we see it all again through the pink glasses of nostalgia?