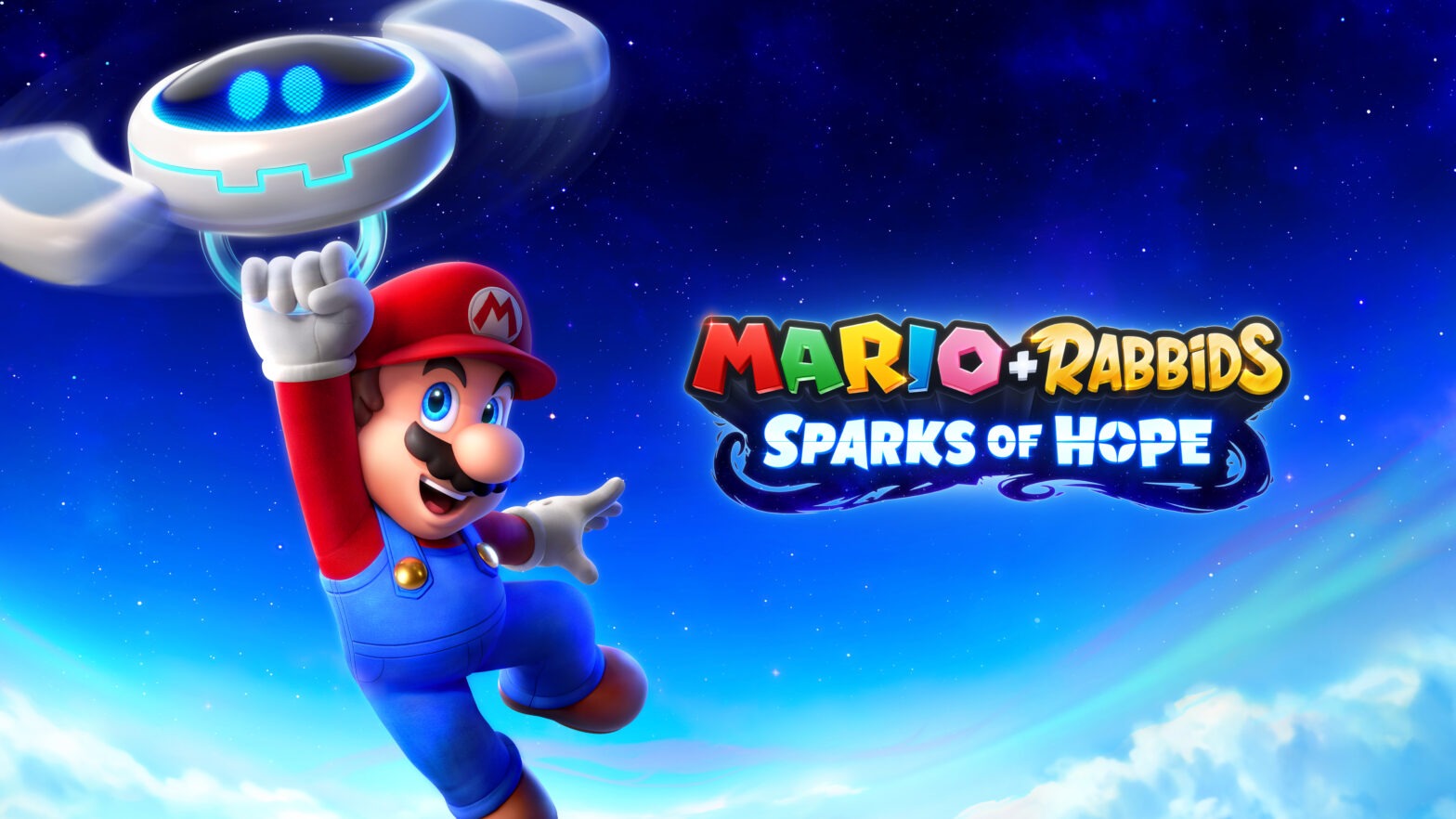 Mario + Rabbids feels like one of these bizarre cross-overs between two completely unrelated franchises that should never have happened, just like Kingdom Hearts. But somehow, it did happen. And in all honesty, it’s a ton of fun. Thanks to CDMedia Greece and Ubisoft, we had the chance to play a pre-release demo version of the second installment in this experimental franchise: Mario + Rabbids: Sparks of Hope. I went into it completely blind, as I had not played the first game in the series, and I must say I was pleasantly surprised by the way the game genres into something that would make even the casual player feel at home with some of the more complex mechanics.

Mario + Rabbids: Sparks of Hope comes out October 20, 2022, exclusive to the Nintendo Switch.
You can pre-order it now from the Ubisoft Store.

All images in this article are screenshots taken from footage we recorded during our hands-on preview of the game.

Ubisoft has done a great job with the visual aspect of Sparks of Hope, especially considering the game is exclusive to the Nintendo Switch, a platform that nowadays feels largely limited by its aging hardware. Yet, Ubisoft somehow managed to make Sparks of Hope look remarkably crisp, 720p render resolution aside of course.

Ubisoft is very respectful of Mario’s art style, and the whole game seems to be shaped in accordance with Nintendo’s guidelines. If you’ve played any of the post-Nintendo DS-era Mario games, you’ll feel right at home here. The character models are detailed and the animations are super smooth, whether it is during cinematics or gameplay. It gives off that early Saturday morning cartoon on TV vibe, and that’s hard to beat.

Performance was decent, but you could tell that the Switch was struggling at some parts. No crashes, but I did encounter a couple of frame drops while cinematics were playing, but that’s not a deal breaker, just me nitpicking. We were playing on a docked Nintendo Switch. Don’t forget that what we got to play was a pre-release build, so we expect the overall performance to be improved when the game comes out.

Just like most Mario games, Mario + Rabbids: Sparks of Hope keeps it simple with the story. Super bad guy/evil galactic being steals something the heroes need, so you embark on a journey to take it back. Very simple to get behind. We only got to play two levels, but luckily the very first level was one of them, so we have a clear overview of the story’s premise.

It’s presented in a brilliant way. The stakes are set high from the very beginning, just like every good hero story, and you don’t know too much about the antagonist from the get-go. So there is an incentive to get through the levels, just to find out what’s actually going on. Having beloved characters take front and center is another incentive to actually get invested. The interaction between the cast of Mario and the Rabbids was handled remarkably well; there were some charming scenes in there. And although the jokes can come across as a bit cringy at times, that’s exactly what Ubisoft was going for here, and to be honest, they do it so well that they managed to get some chuckles out of me. The jokes are not dumb, they’re cute. And it works.

Now, Mario + Rabbids: Sparks of Hope falls under the Turn-Based Tactics (TBT) genre, which means that it will be a bit of a niche title. If you can’t stand turn-based combat, you may as well click off this article, as this game is not meant for you. If you’re into trying new things and have a little experience with turn-based games, like literally every Pokemon game or the recently released Digimon Survive, this might pique your interest just like it did mine.

At the start of each battle, you’re placed on a battlefield, with your characters on one end and the enemy troops on the other. The goal is to make it to the other side, in the specified zone, without losing all of your characters. Defeating all the enemies helps, but it is not necessary for every battle, and that makes room for some creative plays. Each character has their own unique normal attacks, two special abilities, and an “ultimate” ability that is very powerful, but goes on a lengthy cooldown once used. Each character can also move for a set amount of “blocks” at every turn and can take cover behind objects found in the environment. The enemies can of course do the same, so you’re encouraged to go for creative lines of sight and make sure that you use your surroundings to your advantage.

Now that is all pretty simple, but action points is where things get a little tricky. Each character has two action points to use in every round. Attacking, using abilities, and using items take up action points, but moving does not. That means that you have to choose your party wisely because you can not use healing items freely in every round. Thankfully, you have a large cast of characters to use in your party, and they all have a reason for you to choose them, as their abilities are always unique. Some characters have offensive-focused abilities, while others are more defensive. The most useful “class” is by far the support one, like Peach, that can block attacks and/or heal your party.

Thankfully, this game is not too easy

There is a difficulty selection screen on Mario + Rabbids: Sparks of Hope, but most people will be playing on the “Normal” setting, so this is the one I went with as well. The game does get progressively more difficult as you advance through the levels (or that’s how it seemed to me), and the battles force you to constantly be on your toes. I was afraid this game would be too easy to not scare off new players, but I was happy to see this is not the case. The minion AI is not the toughest to beat, but boss battles are a different beast, and I did lose twice while I was trying different ability combinations to get through the first boss. My next run will have to be on “Hard”, so I can get the true Sparks of Hope experience.

The overworld is split up into semi-open levels

In true Ubisoft fashion, Sparks of Hope is split up into semi-open levels, that while they’re not open-world sections, they are the closest thing to an open world. These semi-open levels are gorgeous and give you some freedom to move around and explore. You’ll find plenty of side activities to indulge in, challenges to complete, and charming character interactions to watch. These levels are something I can get behind because they seem like they will actually make the game memorable, and because each level is different, it exudes its own, unique character. But this is something we will have to explore in-depth in the full review, when Sparks of Hope releases, in a little less than a month’s time.

We had about two hours of playtime in our hands-on preview session with Mario + Rabbids: Sparks of Hope, and I can say I was actually impressed by the game. Ubisoft was very accommodating and let us record almost everything, except for parts that contained huge spoilers for the story. And that is one of the reasons I did not go too much into the story deets in this article.

The visuals were charming and the gameplay, although it will mainly appeal to a more niche audience due to its turn-based nature (just like every turn-based game that isn’t Pokemon), was designed very well and did a fine job mixing the Mario cast with modern turn-based mechanics, like those found in Yakuza: Like a Dragon, a game I absolutely loved. And those signature Ubisoft open-level sections are also something that I liked because their presence in the game felt justified.

This game is really out there. And I loved it. The gaming community has been condemning Ubisoft for quite some time, about them “playing it safe” and “refusing to take risks”, and rightly so. But this game is Ubisoft actually taking risks, appealing to audiences outside the AAA market they’re so accustomed to. And maybe this game is also proof that they should do it more often.

We would like to thank CDMedia Greece and Ubisoft for letting us try Sparks of Hope earlly!