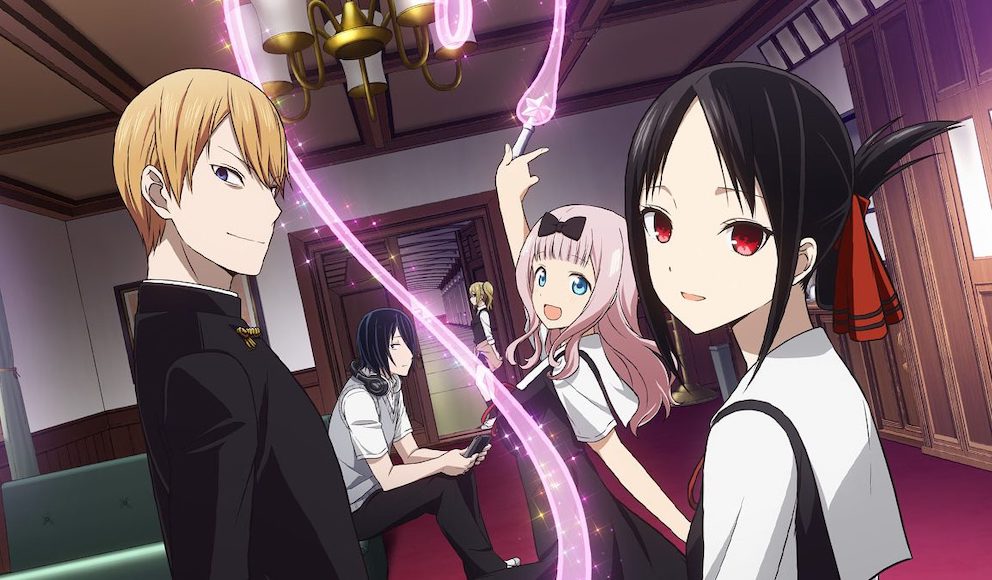 You probably still have your hands full with the releases from April, most of which are still running. There’s no need to stress because May is actually short on releases. There is one anime I do want to divert your attention to: the very popular Kaguya-sama: Love Is War. If you haven’t seen it yet and decide to watch it after reading this article; I guarantee you’ll recognize certain scenes from memes and gifs!

Top student Miyuki Shirogane is the student body president at the renowned Shuchiin Academy. His vice-president is Kaguya Shinomiya, eldest daughter of a very wealthy family, excels in everything she does. Everyone regards them as the perfect couple. Although they actually do have feelings for each other, neither wants to admit it. The first one to confess their love for the other, “loses the war”. They are both determined to win the battle and try to get the other to confess.

The anime is based on a manga series that has been running since 2015. As of last month the manga officially has over 15 million copies in circulation. The anime adaptation started with 12 episodes in 2019, and already a second season in 2020. A live-action film was also already released, also in 2019. The anime is still surfing on the series’ popularity and is already treating us with an OVA as of the 19th of May and a third full season is in the making.

If the millions of copies sold aren’t enough of a testament to the series’ success, both the manga and anime have been able to secure some awards. They won the third “Tsugi ni Kuru Manga Awards” in the category “manga published in print book format”. Later the manga also won the 65th  “Shogakukan Manga Award” in the general category. The anime on the other hand has done really well in the Crunchyroll Anime Awards. In 2020 they won in the categories Best Couple, Best Ending and Best Comedy. In 2021 Kaguya won Best Girl and the anime again won Best Comedy.

An original video animation of Kaguya-sama: Love is War will be released this month. It’s written by Yasuhiro Nakanishi and made by studio A-1 Pictures, who also worked on the first two seasons. It’s likely that the same people are also involved in the making of the third season. The OVA will consist of three episodes and will be bundled on DVD with the 22nd volume of the manga. They will be named Kaguya-sama Darkness Volume 1, Kaguya-sama Darkness Volume 2, and Kaguya-sama Wants Him to Eat. For now there’s mainly just a lot of speculation. The first episode would revolve around swimsuits, the second around a book and the third would be a food battle.

Even though we’re only looking at 3 episodes now, we are certain a third season is coming our way. This short sweet intermezzo helps keep the show stay relevant while we’re all dying to have one of them confess their love already in the third season.