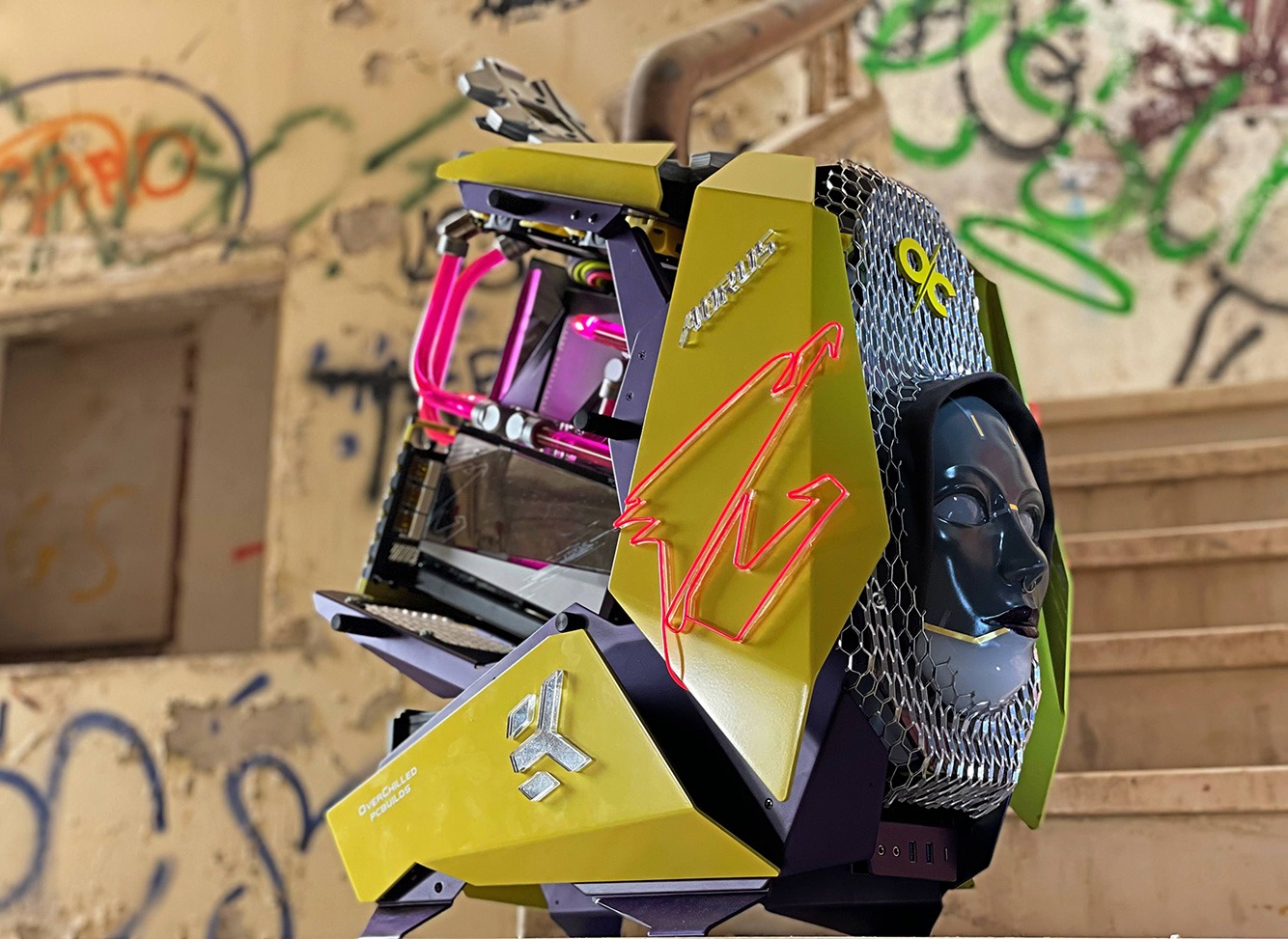 PC has always been the most “interesting” platform to game on. PC players have always thought they were superior to us console peasants. And while many might be quick to declare this as having a chip on their shoulder, a quick look at the PC building community can make you reconsider. Certainly, building a PC may not be as cheap as getting a gaming console, and is definitely a sport for the more technical-minded. Building your own PC however, guarantees your system will look and run as you want it to. And there’s no better example of that than Overchilled’s Project Alt.

PC modding is a hobby for enthusiasts. It’s the extreme sport of PC gaming, if you will. You can see some really amazing examples at r/PCMasterRace, where an awesome community has been created around PC gaming. Even with all the crazy builds you see nowadays, the work of George Antonopoulos and his group of friends is on a tier of its own. Overchilled is a place where aesthetics inspired by gaming and modern pop culture clash with high-performance PC building. And the results are truly unique.

George started his own PC building brand in 2017 and builds custom PCs on a semi-professional level. After years of PC gaming, he found his passion in creating custom PC builds. Since 2017, he has managed to master his craft, collaborate with many giants in the custom PC building space, and gather thousands of followers on his Instagram page. Started from the bottom, now we’re here. George has built more than 100 custom PCs, and that’s no rookie numbers.

The elegant high-end watercooled systems he composes are often thematic, drawing inspiration from either gaming or pop culture in general. Some builds are sponsored, some are his own, some are for his friends or for customers (he does custom orders). And each one is more impressive than the previous. As he told us, recently he and his team created the Overchilled workshop, a place where he can efficiently work on his builds. We will be taking a more in-depth look at Overchilled in an interview with George, coming soon. Today, we will be showcasing Project Alt, an Overchilled custom build inspired by Cyberpunk 2077.

“We chose Cyberpunk 2077 as the build’s concept as it was one of the most hyped and long-awaited games of the year,” says George in his interview with Aorus. “There may have been countless custom Cyberpunk-themed builds but we wanted to give our own spin on a futuristic and colorful build like this one.”

The build draws inspiration from Alt Cunningham, Night City’s best netrunner, who managed to go beyond the limits of cyberspace and is one of the most important characters in the Cyberpunk 2077 story. A fitting name for this build, since in the front there’s a mask with female features and cybernetic hints.

At first glance, it’s impossible to tell how much work George & co. have put into Project Alt. We talked to George and as he told us, most of the parts are completely custom-made by Overchilled. Project Alt took about 2 months to complete. The chassis is a modified Jonsbo Mod5, which in itself is an extreme case, even more so with these modifications. Although, not as extreme as needed for this particular build, so Overchilled decided to paint it. Yellow and purple car paint, sprayed with a paint gun, so that the painting is uniform across the chassis.

In the front of the case, where there is normally tempered glass, a hand-cut car window net, was used. The female mask that appears in the center of the build is also handmade. There is a notch just below the middle of the screen, through which the mask “comes out” of the case. Made of resin in a mold and also hand-painted, with cybernetic touches. The eyes and chin have not been painted and due to the transparent nature of the resin, the RBG LEDs from inside the case shine straight through the mask.

The most difficult part to implement, however, was the completely custom-made reservoir that supplies water to the other parts of the water cooling system. It is a fully custom-made water block, designed using SolidWorks. The tank is located on the right side of the box, where initially there was a large piece of tempered glass. Due to the weight difference between the tank and the glass, the base had to be modified and the connection to the chassis strengthened. On the tank, there are further custom touches, like the engraved Cyberpunk and Overchilled logos, as well as the glass panels that allow you to see the water cooling system in action.

But they didn’t stop there. Most of all the individual parts that make up Project Alt are 3D printed. The backbone at the top of the case is 3D printed, piece by piece, and assembled on the final build.

The Overchilled, AORUS and EKWB logos are also 3D Printed. The AORUS eagle is designed on cut plexiglass, with a pink-colored illuminated optical fiber glued on top. There is more net on the motherboard support, in the same style as the one on the front. The pattern inside the reservoir is engraved, as all the processing and construction has been done in a CnC Router. It’s easy to make an eye-catching build on a surface level. But the attention to all these tiny details is what really takes Project Alt to the next level.

Top of the line specs

Of course, a build that looks like this, can’t fall behind in the performance bit. George has partnered up with Gigabyte’s AORUS and EKWB and used the top components for custom water-cooled builds on Project Alt. At the heart of the system lies an Intel i9-10900K, on top of a Z490 AORUS XTREME WATERFORCE motherboard. The graphics power is offered by an AORUS RTX 3080 XTREME WATERFORCE. In terms of RAM, Project Alt carries 32GB (4×8) of AORUS RGB Memory and uses an AORUS Gen4 NVMe SSD for storage. The system is provided by a GIGABYTE P850GM 80 + GOLD Modular power supply.

Obviously, the most intricate part of the build is the water cooling system. In addition to the custom-designed tank on the side that acts as a distro plate, inside the case, there’s two more waterblocks. A triple radiator is hidden behind the mask at the front, and a double radiator lies hidden underneath the backbone on the top. The AORUS XTREME WATERFORCE series are the top tier components for use in custom water loop builds like this one. Thanks to the AORUS special-purpose hardware, all of which comes without fans, the installation of the water cooling system is not that hard and the error margin is minimized. All fans, fittings, pumps, and radiators are made by the Slovenian EK WaterBlocks.

According to George, the futuristic design of the AORUS parts matched perfectly with the build’s theme, while the EKWB components really make life a whole lot easier for anyone that’s into water-cooled systems. Top-of-the-line specs along with a well-designed water loop guarantee optimal performance through exceptional thermal management. Cyberpunk 2077 may have disappointed many people, but I’m sure Project Alt’s performance is on a whole different boat.

Where can I learn more about Overchilled?

For now, you can start by following the Overchilled team on Instagram, where they upload new custom builds on an almost weekly basis. Each build is more jaw-dropping than the previous one, and we will try to do more showcases on future builds. In fact, in the coming weeks, we have an interview scheduled, on which we’ll talk with George about all things Overchilled, and maybe get a glimpse of what they have planned.

You can see more Project Alt footage in the video below:

Project Alt is made by Overchilled in collaboration with AORUS, EKWB and Jonsbo.