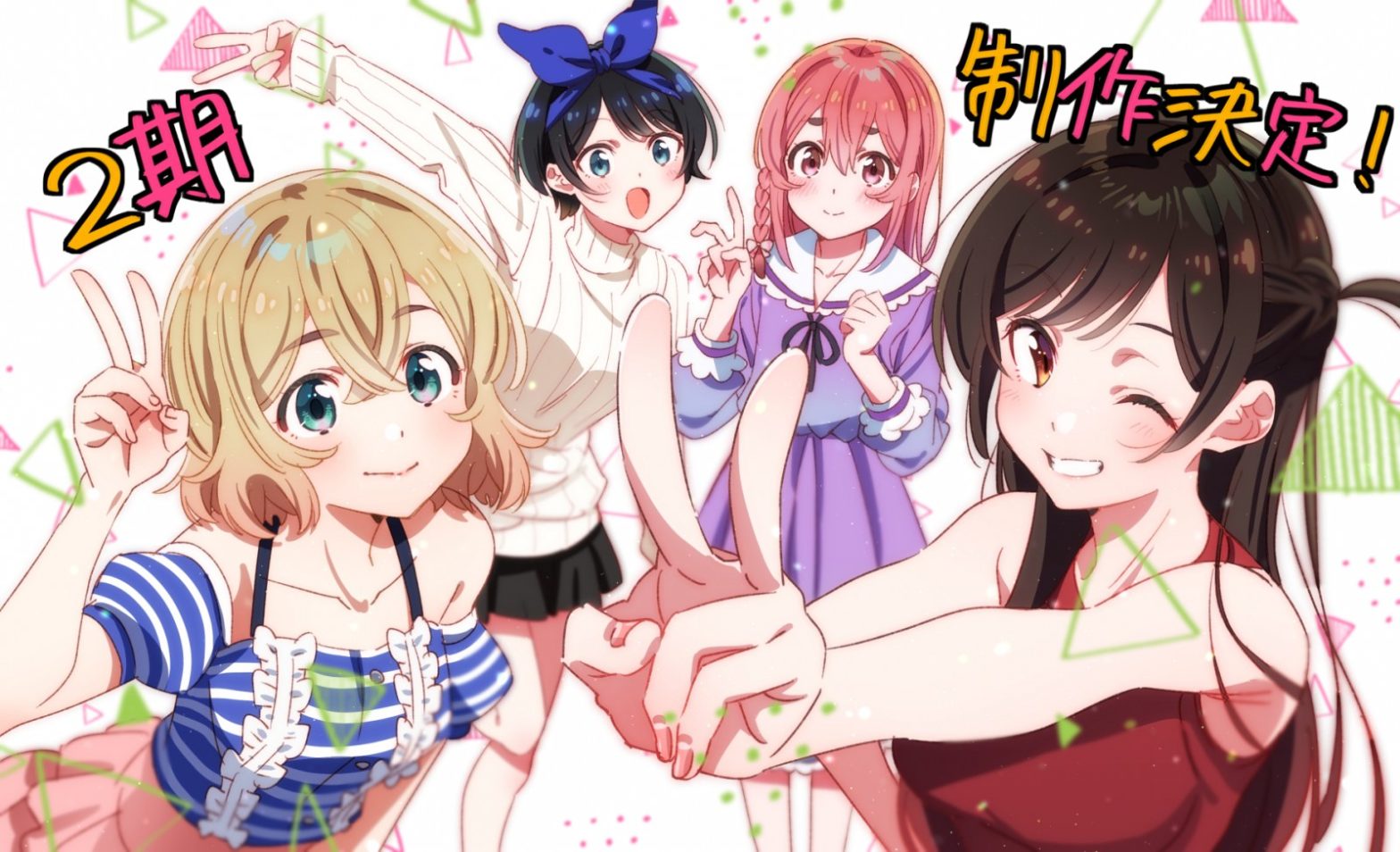 Music festivals, food fairs, trips to the beach. There’s plenty to look forward to during the summer season. For me that also includes turning on the AC, closing all curtains and spending the day inside nice and cool. No better way to keep entertained than by checking out the latest releases in anime. If you like binge watching an entire season in one go, I recommend you check out the releases from Spring first, as most will be finished by now. For summer 2022 anime releases you can find full lists on Anichart of LiveChart with release schedules, but this right here is my own overview.

Based on a manga series, the second season of the anime adaptation will be accompanied by a live-action TV series this summer as well. When Kazuya Kinoshita gets dumped by his girlfriend after only a month, he decides to just rent a girlfriend. Chizuru Mizuhara is very attractive, but Kazuya thinks she’s ingenuine and therefore gives her a low rating. He later brings her along to meet his grandmother, who’s been hospitalized. Seeing that his family likes Chizuru, he keeps renting her to keep up appearances. Things get complicated as it turns out he lives right next-door to his rented girlfriend, and they’re attending the same college on top of that as well.

Lycoris Recoil is an OVA, distributed by Aniplex. Lycoris is a group of all-girl agents operating under the DA (Direct Attack), a secret intelligence organization that prevents crime in Japan. The story follows the girls working at Café LycoReco, where orders range from taking coffee to citizens of Tokyo.

My Isekai Life: I Gained a Second Character Class and Became the Strongest Sage in the World!

Based on a light novel series with a manga adaptation. Protagonist Yuji Sano is always slaving away on a computer. When a message pops up on his PC that summons him to another world, he restarts it. Unknowingly, he accepted the request and now finds himself in a fantasy world. He wants to wake up from this dream and get back to his work. He quickly learns his class as a monster tamer allows him to befriend slimes. The slimes help him absorb magical knowledge and now he unlocks a second character class! Does he still want to go back to his mountain of paperwork now that he’s the greatest sage in this fantasy world?

Based on a light novel series, with both manga and anime adaptations, as well as video games. In 2126 YGDRASIL is released, a full-dive MMORPG. After twelve intense years, the game servers are to be shut down. Momonga, a skeletal overlord character, is the guild leader of one of the strongest guilds the game knew. He decides to stay logged in until the servers shut down. He gets trapped in the form of his game avatar and is transported to another reality along with the game world and all its NPCs. He begins exploring trying to find other “real” people and unraveling the mystery of this world.

Classroom of the Elite season 2

Based on a light novel series with a manga adaptation. The Japanese government established the Tokyo Metropolitan Advanced Nurturing School, instructing the generation that will support the country in the future. Students get a high degree of freedom to mimic real life. The protagonist is Kiyotaka, quiet, not good at making friends, and very intelligent. He is dumped in the class with the inferior students. After meeting his classmates, the situation changes as they start getting involved in some affairs. His dream of an ideal normal high school life is out of the window.

Based on a manga series. The story revolves around Alto, a student at the Royal Ortigia Magic Academy. To be able to graduate, since his grades aren’t anything to boast about, he decides to summon otherworldly assistance. He summons legendary she-devil Vermeil as his familiar, and although she’s a powerful ally, her magic can only be replenished with a kiss. His jealous childhood friend Lilia isn’t too happy about that, of course.

Made in Abyss: The Golden City of the Scorching Sun (Season 2)

Based on a manga series, with a live-action film and video game underway. We follow Riko, who lives in an orphanage in the town Orth. Orth is surrounded by a giant hole, known as the Abyss. It’s a popular spot for cave raiders, who undertake dangerous descents into the hole to recover relics. There’s also a curse hiding in the abyss, with more acute effect the deeper down you travel. Riko’s mother is a legendary cave raider, who’s now considered dead after her last descent. Riko wants to follow in her footsteps, and together with her robot friend Reg, starts diving into the Abyss.

My Stepmom’s Daughter is My Ex

Based on a light novel series with a manga adaptation. Mizuto and Yume were a normal couple during middle school, but decided to break up when they entered high school. After only two weeks, they are unexpectedly reunited. Their parents have decided to get married, and now the ex-lovers have to live together. They don’t want to get in the way of their parents’ happiness, so they set up a new rule. They have to live as brother and sister. The first one to feel attraction towards the other, loses.

Uncle from Another World

Based on a manga series. Takafumi’s uncle fell into a coma seventeen years ago, but is now back. He learns that his uncle treasures video games and was actually transported into another world as a heroic guardian while was comatose. He also needs to catch him up with the latest technology, including the outcome of the ‘90s console war.

Harem in the Labyrinth of Another World

Based on a light novel series with a manga adaptation. Protagonist Michio Kaga, a high school student, struggles with life and society. While browsing online, he stumbles upon a weird website that allows you to create skills and abilities for a character by means of questions and a point-based system. He completes a character and gets transported into a fantasy world, completely reborn. It’s the start of his cheat and harem legend.

The Yakuza’s Guide to Babysitting

Based on a manga series. We follow Kirishima Tooru, who is the right-hand man of a crime family Sakuragi. It has earned him the nickname “the Demon of Sakuragi”, as he often listens to his violent instincts. But now the family has tasked him with… babysitting their little daughter.

Call of the Night

Based on a manga series, this story revolves around Ko Yamori, who’s decided to quit school and starts wandering the streets at night trying to beat insomnia. He meets Nazuna, a vampire who shows him the joy of being a night-walker. Wanting to become a vampire himself, he’ll have to fall in love with Nazuna first.

When Will Ayumu Make His Move?

Based on a manga series, the story follows first-year high school student Ayumu Tanaka and second-year Urushi Yaotome, both members of the shogi club. Ayumu wants to confess his feelings to Urushi, but wants to beat her in a game of shogi first. He is just a beginner though, and won’t defeat her any time soon. Meanwhile, Urushi tries to get Ayumu to admit his feelings.

We highlighted the first season in the spring season of last year, check out the summary here if you haven’t seen it already or if you’re curious to find out more.

Lucifer and the Biscuit Hammer

Based on a manga series, the story focuses on a young misanthropic student names Yuuhi Amamiya. One day he wakes up and finds a lizard sitting on this bed, who explains he has been chosen as a Beast Knight. The Beast Knight is a magical warrior who has to help a certain princess defeat an evil guy who is trying to destroy the world with something called the Biscuit Hammer. Although Yuuhi shrugs it off at first, he changes his mind after meeting the princess and discovering her true intentions.

The Devil is a Part-Timer! Season 2

Based on a light novel series with a manga adaptation, and a first season of the anime that was released in 2013. To the many fan’s content we now finally get a second season. The story revolves around Satan himself, who wanted to conquer the world of Ente Isla, but was forced to retreat. He enters a gate and winds up in modern day Tokyo. In order to survive, he is now Sadao Maou. A part-timer at MgRonald’s. The story unfolds as more characters from Ente Isla arrive in this new world.

Is it wrong to pick up girls in a dungeon? Season 4

Based on a light novel series with a manga adaptation and video games. Orario is home to a number of gods, who are limiting their powers to experience hardships of those in the mortal world, purely for excitement. Each god supports a group of adventurers, who mainly explore the labyrinth under the city to battle monsters. That way adventurers increase their level and they unlock special powers, much like in an RPG. We follow Bell, the sole member of the Hestia Familia. He was once saved by the famous and powerful swordsman Ais and vows to become as strong as her.

Summer 2022 anime movies for your watchlist

There is again too much going on in terms of new releases to include everything that has caught my eye. Something else that stood out is an interesting list of movies that are also coming out this summer. Without going into detail, I’ll list a few of the most notable ones that deserve a spot on your watchlist.