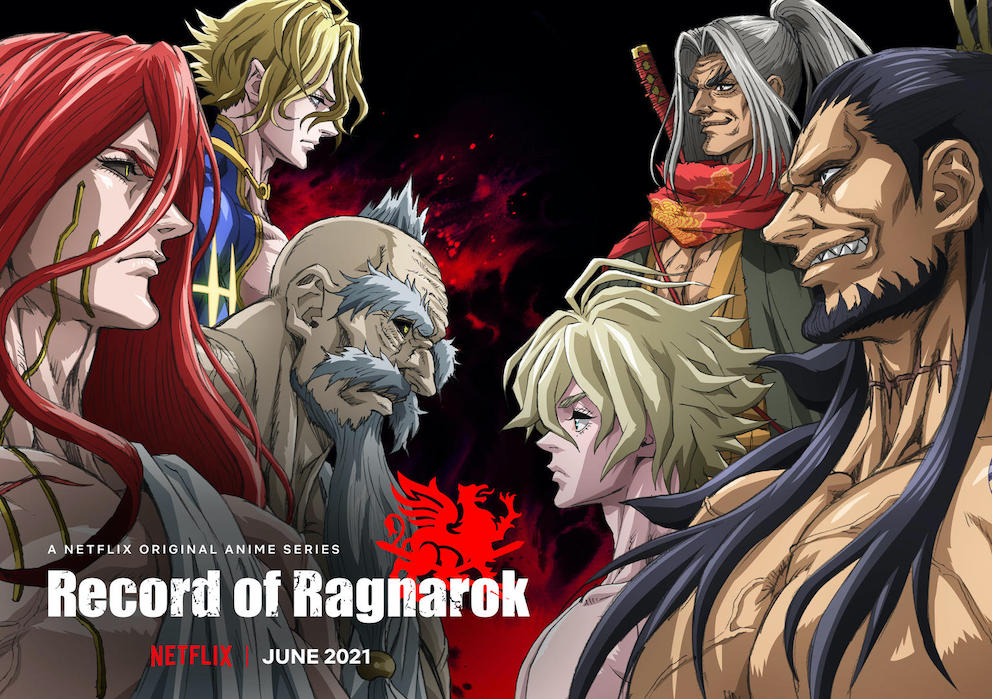 The biggest anime event in Japan, AnimeJapan, takes place virtually this year. After the event got canceled last year, the organization decided to offer 51 streaming programs this weekend in the following regions:  US, Korea, Thailand, Singapore, Taiwan, Hong Kong, and Macau. During the event, Netflix announced they will premiere around 40 new original anime titles this year. That’s almost double the amount of last year. Let’s look at the specific titles they presented.

During their showcase, Netflix announced they will release Record of Ragnarok in June 2021. Warner Bros. Japan is producing the anime and the Japanese studio Graphinica takes care of the animation. The manga of the same name started in 2017 and is very popular. It’s a story about gods and the survival of the human race. In 1-1 showdowns humanity must prove they are worthy to live. To keep things fair the humans receive the assistance of a valkyrie.
You can watch teasers here and here.

Coming later this year is a CGI-animated series based on the Resident Evil-games by Capcom. TMS Entertainment is producing the anime and Quebico will animate it. The series features the protagonists from Resident Evil 2: American federal agent Leon S. Kennedy and TerraSave staff member Claire Redfield. While on a mission in the White House Leon has to fight off a horde of Zombies. Claire on the other hand is providing support to refugees in a distant country. There she comes across a mysterious drawing from a boy infected with a virus. She starts investigating it and eventually meets up with Leon, who sees a connection between the zombie outbreaks.
You can watch a teaser here.

The Way of the Househusband

Set to release on April 8 is comedy and action filled adaptation of The Way of the Househusband. The original manga from 2018 has already been adapted into a live-action television drama in 2020. J.C. Staff. produces the Netflix anime. The story follows former yakuza boss “The Immortal Dragon”, or Tatsu,  who retires from crime to become a househusband. His former yakuza underling is not too happy about all the cooking and cleaning Tatsu’s been doing. Although he tries to accommodate a domestic life, assassin after assassin try to take him out.
You can watch the trailer here.

During the event Netflix also provided a new glimpse at Yasuke and Eden.

Yasuke will premiere on April 29th and follows the first African samurai, also known as “the greatest ronin never known”. The story unfolds in an alternative Japan filled with mechs and magic. When a local village gets attacked Yasuke is tasked with escorting a mysterious child. The Oscar-nominee LaKeith Stanfield will play Yasuke, who also starred in Netflix’s adaptation of Death Note. Studio Mappa delivers the animation, Jujutsu Kaisen and Attack On Titan: The Final Chapter are some of their most recent work.

On May 27th we can expect the premiere of Eden. The anime takes places in a future inhabited solely by robots. During a routine assignment two robots accidentally awake a human baby. They decide to raise her in secret and start to question everything they were taught about humans. The anime is directed by Yasuhiro Irie (Fullmetal Alchemist: Brotherhood) and created by Justin Leach (Ghost in the Shell 2).
You can watch the trailer here.