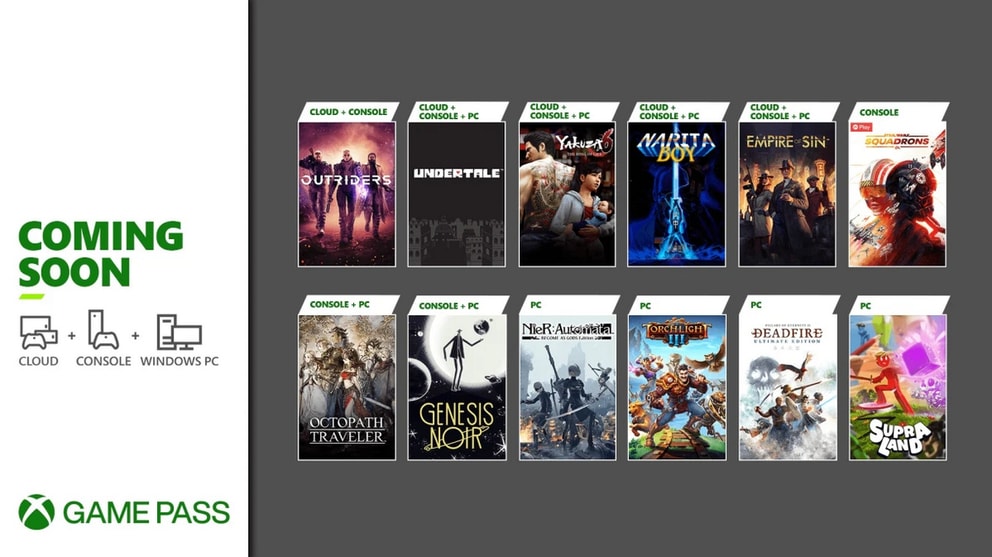 Twelve games where announced in the Xbox Game Pass March drops announcement. A huge bundle of possible entertainment for your Xbox system. Provided that you have enough space on your hard drive, get ready to install some gems.

Undertale – Cloud – Console – PC
This is an RPG about humans and monsters where violence is not always a solution, unless you want it to. A game focussed on humor, character dialogue and choice. This indie game is a hidden gem. A short, funny and laid back experience. And has some replayability.

Empire of Sin – Cloud – Console – PC
A character-drive game, turn based combat and strategic empire management. All set during the probation of Chicago in 1920. Take on bosses like Alphonse Capone or Frankie Donovan while building your empire. Initially a buggy launch, Romero games patched out the bugs and crashes.

Nier: Automata – PC
Already available on Xbox, Nier: Automata is now coming to Game Pass PC. Take on alien-created machines and human-crafted androids in this action role-playing game. The story and narrative themes met with general praise. It won the 2017 Award for Role Playing Game of the Year and Best Score/Music.

Star Wars: Squadrons – Console
Get your wingman and fly by an Imperial Star Destroyers bridge while hooting like sandmen. Personally I recommend this game in VR with HOTAS. But the set-up alone will set you back a lot of imperial credits. And it only releases on console, EA Play is still not available with Game Pass PC. Just grab your controller and live your starfighter pilot dream.

Torchlight III – PC
Dungeon crawler fans rejoice! If you’re tired of grinding Diablo III’s seasons or waiting for Diablo IV give this one a shot. Torchlight III was already available for Console and Cloud and is now getting added to PC.

Genesis Noir – Console – PC
Genesis Noir is an adventure game with an emphasis on exploration, simple interactions and generative art. A non-traditional point and click adventure: With a focus on tactile puzzles and exploration, you’ll experiment with objects in small slivers of the universe to discover how they can be manipulated to progress your journey.

Octopath Traveler – Console – PC
Eight characters, eight stories and classical turn-based combat with beautiful effects and backgrounds. One of my favorite turn-based games, especially on the Nintendo Switch. A lengthy journey in the world of Orsterra, some grinding and captivating stories. A true gem and pristine addition to Game Pass. If you like turn-based JRPG’s check out Romy her review of Bravely Default II! Brought to you by the same producers.

Supraland – PC
Roam and explore a huge interconnected world in your quest to save the village. Unlock abilities and solve puzzles in first-person.

Yakuza 6: The Song of Life – Cloud – Console – PC
Exploration, arcade style over the top combat and ragdoll physics. The Yakuza series is praised by many. And honestly you need to give it a shot to see if it’s something for you.

Narita Boy – Cloud – Console – PC
Xbox Game Pass March release.
Made by Studio Koba and published by Team17. Narita Boy releases on Game Pass this month. Get a fresh look at this game and show this indie studio some love. Check out the trailer to (try) figure out what the game is about. Words cannot describe it.

Outriders – 01/04/21
And last but definitely not least. The biggest announcement for the Xbox Game Pass March release.
Check out my impressions of the beta here, with updated notes on what the devs have already done to improve the beta. Personally I was not hyped about this game. But playing the beta and having a blast it definitely stayed on my radar. This is huge.

The importance of the Xbox Game Pass releases

Developers releasing games directly onto game pass aren’t a new thing. Developers usually have a contract with Microsoft or they have been acquired by Microsoft. As a matter of fact most Bethesda games will also release on game pass after the acquisition. Narita Boy and Outriders are not published by companies owned by Microsoft. These publishers follow the statistics from up close when it comes to Game Pass releases. Is the deal worth it? How much players are trying our product? How is player retention? Based on the data they collect we could see more, or less, releases of games not associated with Microsoft. So give the releases a try and show you want more Day 1 content on Game Pass.

Get those achievements and finish those storylines. These games are leaving Game Pass on 31/03/21. Again you can buy them with your 20% Game Pass discount and finish them later.