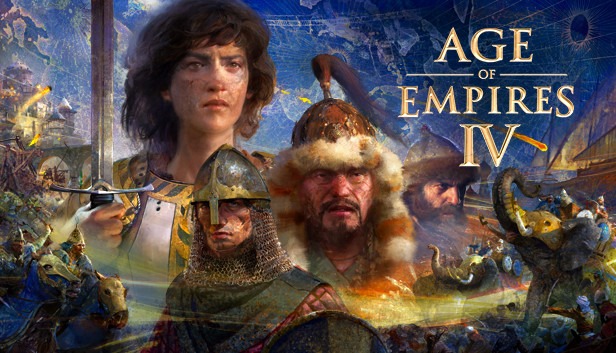 With over 20 years on its back, Age of Empires returns to the spotlight. So, Relic Entertainment shows us that in Age of Empires IV things have evolved in some areas, yet leaving many familiar things. In any case, the formula of Real-Time Strategy has not changed much, except for some elements of its gameplay. Let’s get ready to dive into this newest instalment.

As a first glance, its graphics are something beautiful. Yet we do not see anything crazy planned or something that catches the eye on the spot. Everything is harmonized with each other and in balance, including nice details to understand what is happening on the map. From its original design, everything has to tie together as there is an atmosphere that needs to emerge. Something which is achieved. The realistic scenes on the battlefield are incredibly successful. The maps have been created based on the locations that are still accurate to this day. All this contributes a lot to its design.

On the other hand, maybe I was just expecting something more in terms of graphics. All the representations have a detail that gives some acceptable value, but practically for a 2021 title graphics, I would rather add a little more bling. Of course, the graphics may have remained so that there is no problem in the overall functionality of the game. There were no frame drop issues or substantial bugs, so this is something I respect. In short, everything works fine, but there is nothing crazy about the game’s image. Nevertheless, I think the 3rd release of the series had nailed it better in this area.

One of the strongest points of the game is the historical developments and the representation in the transitions by the narrator. With very beautiful imagery, we have the current representation of the countries and locations, which are outlined with troops or buildings with a gold simulation. It is impressive to see the constructions that still exist through the centuries, and next to them the image of that time.

Apart from that, the photo and the general set in the transitional stages, as well as in the design of the menus, are very polished. There seems to have been a lot of attention to the design, so too throughout the UI. In other games, the UI and menu items may not be as important. But the clarity of a well-designed game in which you spend a lot of time looking at icons and trifles, whether in the game or in the menu, is important.

Another small detail is the design during the construction of some buildings. We see workers flying to different parts of the building, constructing it like a time-lapse, which also gives a beautiful picture of the evolution of time.

Also a well-crafted part. It does not have many special elements, as the sound in these games has a very clear role. The changes must be clear when something happens, so that the player understands what is happening. At this point it is clearly successful. I did not find anything that confused me, and I found many parts of the game that gave nice notes.

Initially, the construction and war SFX’s were of very good quality. They invested beautifully in the act of the image and there was no problem of getting involved even when many things were done simultaneously. If this was not well crafted, it would be easy to get confused when there is an attack, you build, some villagers are sleeping standing up, and you do not know where to gather your pieces first. Finally, I liked that each culture had its own song that accompanied its image.

Maybe the item I liked the most, and I would like to see more variety. All the interpretations were good, and I liked how the troops sounded when they were fighting, or you made them do things. Of course, what I would like more is diversity in the phrases than in their emphasis. Personally, as a player, I spam clicks, which makes the unit or the character I have chosen respond to. For. Every. CLICK. That is the only element where I have some feedback here, so that I do not hear the same line every second.

It is worth emphasizing how they deeply invested in dialects and older forms of speech. Obviously, a game about different cultures going to war would be boring if they all speak the Queen’s English. Of course, not every title which implemented something like this has actually pulled it off, so it deserves some praise in its own right.

And now the element that is most important in the whole body of the game and especially those that have strategy elements. Starting with a few simple points, the controls have changed only the keyboard shortcuts. Nothing unusual through the tutorial and the first missions. Comparing Age of Empires II with Age of Empires IV, you will not find many differences. However, in terms of the evolution of the game, I felt that the Unit Cap was relatively small. I would not like the pace of creating a unit to be lower, because it drops its flow a lot. But a bigger Unit Cap would give more pleasure and enjoyment, in many areas. It also does not seem that such an element would spoil the competitive part of the game.

Then, all the magic of the game are the civilizations that exist. Rus, Holy Roman Empire, Chinese, English, Delhi Sultanate, Mongols, Abbasid Dynasty and French. Of all these, I really enjoyed the Delhi Sultanate. There is no greater pleasure than war elephants rushing at opponents. Also from the Civs, the Mongols were the best. In the game you get used to the construction, the defence of your location, and in general the establishment part. The Mongols, on the other hand, differ because the image of the nomads has been preserved. Thus, they are the only ones who can collect almost everything and relocate on the map, which makes a significant strategic difference.

The tutorials are very friendly for new players. You get used to the mechanics and even from the beginning of the campaign, that concerns the Normans, you learn about the game’s evolution and pace, and you have tips if you wish. Besides the tutorials, I find the first 35 chapters of the story a bit too boring at first. Perhaps I’m just too experienced?

All cultures have a lot in common, but each has its own differences in evolution and therefore other traits. Specifically, in the game at some point you get to create some Landmarks that mark your evolution in the Ages. Very interesting were the Chinese who can build 2 such Landmarks and dynasties. The dynasties in turn give some Traits that also help down further in the game. Practically, this is one of the changes implemented in the game, and it is a very nice touch.

In a few more things, sieges are a little easier. Warriors can build rams and towers. This saves the whole wait-until-the-tower-comes-from-the-other-side-of-the-map, making it more offensive. Also, you can now manage the units on other axes. This gives a greater in-game fun for strategic placement. With a few minor tweaks, it looks like the battle has cleared up a lot from the image we had in older versions.

Initially, in a story, the narrative element plays a special role. The good thing is that it keeps you at a distance as an outsider, in relation to what happens in the game. Such a role distances the player and makes him see the story more generally, distinguishing the wider context more beautifully. On the other hand, it distances him. In this particular company, we have seen narratives by the characters themselves. This makes you more attached to the game and what really happens in the picture.

Apart from this Multiplayer, all modes are at your disposal to explore. VS, VS AI, VS AI coop and all the best. Alone or with friends. This is something I really like about these games, as it is interesting to approach something and manage it yourself, or to talk to a friend about how to proceed.

I have mixed emotions. I hesitate in the fact that the game is very clean, losing moments of battle, and that this clarity is something that is practically convenient. Also, I have never seen more neat places in the battle that practically helps a lot in the outcome and the strategy. The less chaos, the better. Going a little further, I think the game is a must for new players in the Real-Time Strategy element. It has a variety of gameplay and options in the general game so that one can see Strategy and then go to the older versions that, unfortunately, none has surpassed Age of Empires II.

Continuing with how clean the game is, thanks to it, I felt like I was losing parts of the story and the cultures. I accept that cultures like the Saxons have a milder image, but the Mongols had a lot of barbarism and terrorism in the surrounding civilizations, which in a well-designed historic battle game I would like to be presented accordingly.

But keeping all that aside, the game is beautiful. Once the Strategy style holds you, it will not leave you, and in each defeat, the player will think of another way to approach to move forward. I recommend it to all those who want to try this side of gaming, but also to all the old players who will see a very smooth gameplay. Given some more time to push some patches out, we’re pretty confident that Relic Entertainment can elevate it to true everlasting glory.

We’d like to thank Xbox Greece for kindly providing us with the review unit we used.