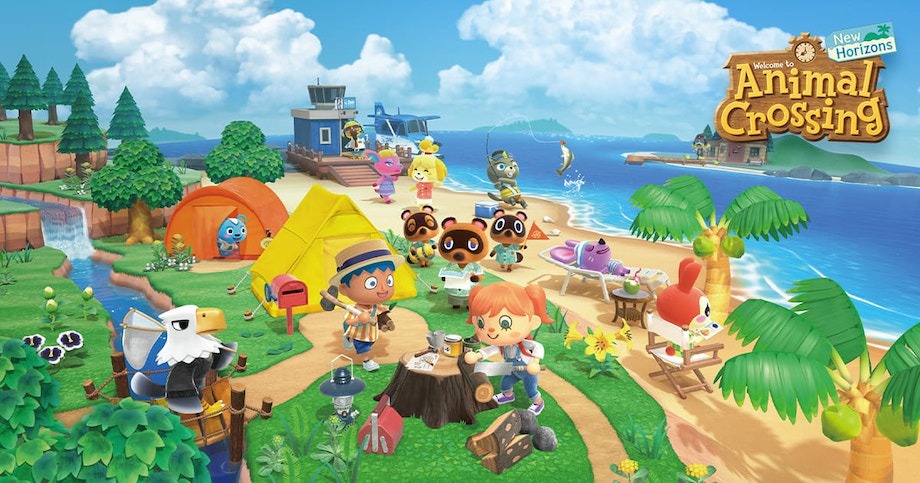 On March 20th 2020 the long awaited Animal Crossing: New Horizons (ACNH) released at the start of a global pandemic. If there was ever a time where people would want to escape into a virtual world to explore new horizons; this was it. The release coincided with Doom Eternal which led to many hilarious crossovers. Let’s celebrate their anniversary by looking into what made New Horizons such a big hit.

During a Nintendo Direct in September 2018, Nintendo announced that they will release a new Animal Crossing game in 2019. Development on the game started already in 2012, immediately after the release of their previous title Animal Crossing: New Leaf. The Nintendo Switch didn’t even exist back then, yet concepts were already being designed. New Horizons was eventually delayed until March 20th 2020 to ensure the game could be the best it can be. Personally I think they achieved their goal. Knowing they already sold 31.18 million units at the end of 2020, a lot of people feel the same way.

New Horizons brings everything from the previous installments that the fans love so much. You still encounter all your favorite animals and hand all your money to a raccoon. On the other hand, it embraces loads of new functionalities that the new hardware has made possible. Where previous games are set in already established villages, the deserted island offers great freedom to customize your world. Not only can you create e.g. cliffs and rivers, but the new item crafting functionality has taken a very prominent place.

Should you explore New Horizons?

If you have added a couple of friends on your Nintendo Switch, you may have noticed they are putting every waking moment into ACNH. This has led people to ask me if they should buy it as well. I find that hard to answer, since the goal of this game is unlike most. There’s no combat, no quests, no story line. And that’s part of what makes this game so great. You can just do you. You want to put on a sushi outfit and hand out silly hats to your neighbors? Go ahead. You’d rather decorate your island head to toe for a 5-star rating? You want to catch fish for 4 hours straight? Whatever floats your boat. If you’re willing to log in regularly to keep in touch with your neighbors and seasonal activities, and just enjoy the island life, then yes, please buy this game.

For those who are unfamiliar with the Animal Crossing franchise, allow me to summarize. In its core it’s a life sim played in real time, featuring the seasons of your hemisphere. Tom Nook, the fat raccoon, sells you a getaway package and you move to a deserted island. You live in a tent until you’ve earned enough Bells (the in-game currency) to pay off your debt to Nook and take on a new mortgage for every house upgrade. You make money by crafting items and selling them, or collecting fish and bugs and selling those. There’s also a stock market-type feature where you can buy turnips once a week and need to sell them at varying prices within the next week. You can buy and sell items in Nook’s Cranny, a shop run by Timmy and Tommy. The twins are not related to Tom Nook, but he is their mentor.

An important part is the museum, where you donate fossils, fish, bugs, sea creatures and art pieces. Trying to e.g. catch all the fish available in the game is a goal most players set for themselves. The tricky part is that certain creatures will only be available during specific months, times of day or even weather conditions. By completing basic tasks such as fishing or gathering resources, you receive Nook Miles. You can use these to unlock certain recipes, buy items and most importantly Nook Miles Tickets. With it you head to the airport and fly to new islands with Dodo Airlines. There you can meet animals, called villagers, and invite them to live on your island. You’ll unlock even more features as you keep playing.

The villagers are honestly my favorite part of the game. There are almost 400 available in New Horizons, most of them from previous installments. They each have their own personality but can be divided into 8 main types: Cranky, Peppy, Lazy, Sisterly, Normal, Snooty, Jock and Smug. Whatever their personality type you can befriend them easily. Fulfilling their requests, talking to them regularly and showering them with gifts will advance your friendship level. Once you’ve reached best friends status they can give you a photo with a little personal note. Even after a year the conversations with my villagers often surprise me. My absolute favorite interaction took place on my birthday – they hosted a surprise party! It feels like they genuinely care about you and miss you when you don’t talk to them. We need that kind of wholesomeness more than ever during a global pandemic.

When you first play the game you see a bunch of mini maps that determine the lay-out of your island. You get to choose the one you like best, but the only thing that really matters is the placement of the river mouths. Pretty much everything else can be changed; you can build cliffs, ponds and change rivers. That means you can also place bridges and stairs. You’ll have to unlock these functionalities though, but it beats the fixed town structures of New Leaf by a Nook mile.

Tom Nook will appoint you as the Resident Representative of the island. Which means you get to decide where buildings go; think not only neighbor homes but also shops. What’s even better is that you’ll later be able to relocate them if you want to redesign your island. Of course Tom Nook would be a sad poor raccoon if he let you move buildings for free. But let’s be honest, what else are you doing with your Bells? Burying them?

Are you crafty enough?

It has long been possible to design patterns and customize the color of certain items. In ACNH you can now craft almost anything. You can find crafting materials on your island, but you can also fly to another island to gather materials there. By using a workbench you can then craft anything you have you learnt the recipe for. There are definitely some improvements to be made here: it’s not possible to craft using items from your storage or to craft multiple items at once. It’s equally annoying as not being able to buy e.g. two dresses when trying on clothes. You can only buy what you can actually wear at the same time. This means walking back into the dressing room if you want to buy a piece of clothing in every color or want enough units to dress your neighbors in the same outfits. (ADORABLE!).

At any given time one of your neighbors will be crafting an item, talk to them and they will give you the recipe. You’ll also find one recipe in a bottle on your beach every day. Another way to come by recipes is by shooting balloons; but they can also contain items, materials or bells. There’s also no guarantee that you find new recipes. For the first two months I used to send every double recipe to a friend which was useful for both of us, but only for a short while. The real recipe hunt started with the seasonal events.

The time and season in ACNH coincides with the system time of your Nintendo Switch and the hemisphere you’re on. This means that shops open and close at fixed times, there’s a chance of falling stars at night, it snows during winter months and mosquitoes bite you during summer time. It also means that if you haven’t logged in for a while, your neighbors notice and will make remarks about it. On top of that the game focuses on seasonal events, like Bunny Day (Easter), Valentine’s Day, Halloween and many more. Most seasonal events certainly feel very US-focused, but at the terminal in Resident Services you can often buy items celebrating more international events. My personal favorite is probably the cherry-blossom season, because the items you can craft with the petals are very cute and because it’s more Japanese.

To time travel or not

The real time aspect of the game can be frustrating at times. The Halloween event for instance only lasts a couple of hours on the 30th of October. If you’re like me, in non-covid circumstances, you’re attending a party and won’t be able to enjoy the festivities in New Horizons. Maybe your work schedule interferes with the opening times of the shops.  Whatever the reason, a lot of players are frequent time travelers. That means changing the system time of your Nintendo Switch. There are some minor side effects like cockroaches appearing in your home, neighbors feeling neglected and weeds growing quickly… During the first year of the game every new event was time locked, meaning you can’t access it by traveling forwards. You can however revisit events once they have been added to the game. The community is divided on the topic, but do what suits you best.

Have we seen it all now?

A full year in New Horizons means we’ve seen all seasons with their seasonal events. You’ve had a chance of catching every single fish or bug and completing the collections in the museum. If you’re like me and kept working full-time despite the pandemic, you likely haven’t found every single recipe or caught every creature. Nintendo has already proven that they can still add new content: to celebrate the 35th anniversary they added Super Mario Bros-themed furniture to the game. On the 26th of March Sanrio-items will become available when you scan the Amiibo cards. There have been tons of free updates already and the community speculates if paid DLCs could introduce some familiar characters from previous games we haven’t seen so far. I know I’ll be playing regularly for a very long time to keep in touch with my favorite neighbors.