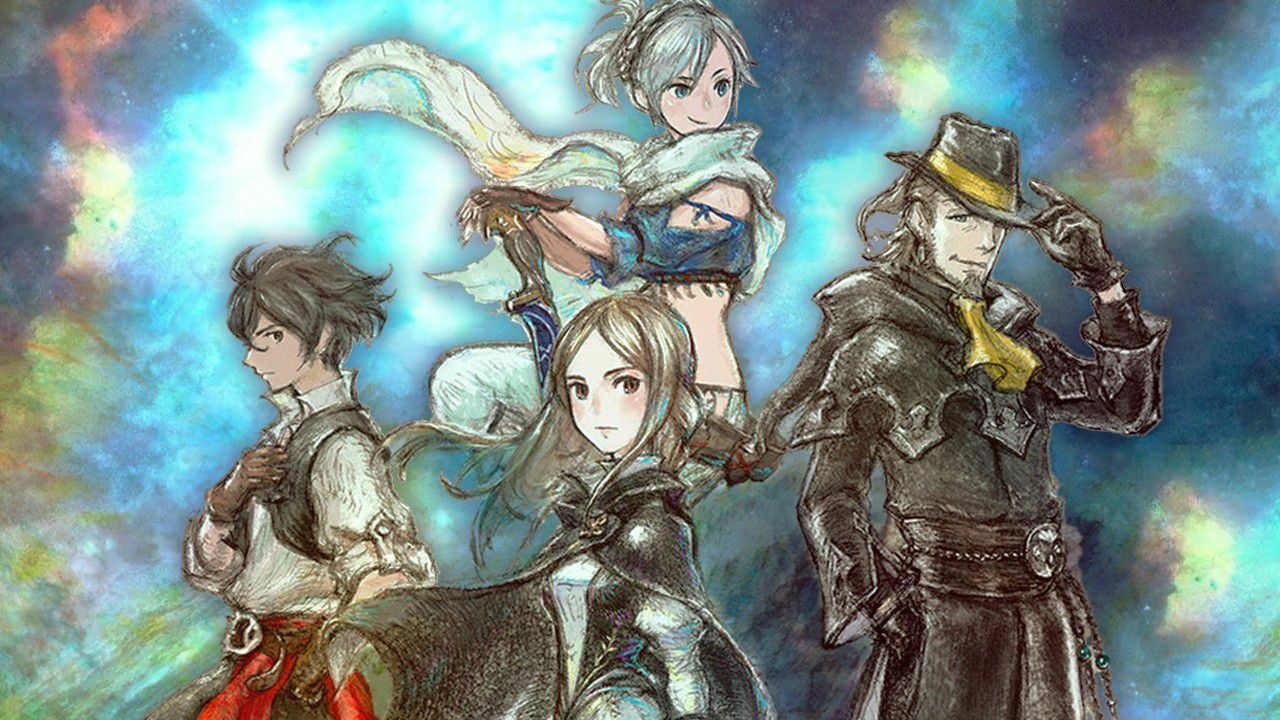 On February 26th the latest addition to the Bravely series by Square Enix was released for Nintendo Switch and Nintendo Switch Lite. Despite the title, it is not actually a sequel to the previous ones but a standalone game. Packing a story with new characters and familiar mechanics. So don’t hesitate to pick up Bravely Default II if you haven’t played any of the previous Bravely titles. In this article we’ll dive into the specifics and my own experience with the game. I can already tell you one thing: If you like classic turn-based JRPGs, you’ll like Bravely Default II.

Bravely Default II is in many ways a classic turn-based RPG. You travel with a party of four between different cities to complete objectives. In the open world-ish area you can rotate your camera 360 degrees; to get a better look at where you can find treasure chests and monsters. You’ll be battling those to gain experience points and level up your party. Besides the open world you’ll also find dungeons, where you won’t be able to save your game. I suggest stocking up on items like mana potions before entering any dungeon. There will be safe points and even teleports to take you outside where you can set up a tent and let your party rest, make good use of them. Personally I prefer the dungeons to battle enemies and gain experience, because of that added risk of losing some of your progress.

During the turn-based combat you can choose whether to spend your action using a basic attack, a spell, an item or the Brave/Default function. With “Default” the character will not attack and store an extra “Brave Point”. With “Brave” you spend Brave Points to take an extra action this turn. If you don’t have any Brave Points you can still use the Brave command, but your Brave Points counter will go below zero. Your character will then use every turn to store Brave Points until the counter is no longer negative. It takes a little time to get a hang of these commands. When you do however it can change the outcome of any battle by using them at the right time. Be aware that your enemies also master this technique and don’t underestimate their ability to wipe out your entire party.

Your party members in Bravely Default II can take on different “Jobs”. These will all sound quite familiar if you’re an experienced gamer, but don’t worry if you’re not. The game offers plenty of tutorials that you can access at any time. You can obtain new jobs by finding Asterisks, which you receive after defeating a boss. Some of the jobs are Bard, Beastmaster, Monk, Mage… Finding more Asterisks brings more opportunities to personalize your party to best accommodate your play style. When the story leads you to a Crystal, it can unlock a special ability for your character depending on the equipped job. These are very strong abilities that only become available when specific job-related conditions are met, such as using a certain ability X times. Using the special ability will also grant certain buffs to the entire team, so make sure to use them wisely.

Bravely Default II is certainly not a game you can finish in one weekend. You need to put in the time to gain experience and make your party stronger. The boss battles can be very challenging and you don’t want to rush into them. To help you level up faster you can set sail and explore while your Nintendo Switch is in sleep mode. After completing the side quest “Borrowing the Boat”, you can visit the boat-woman in any town. Hit “start exploring” and put your system in sleep mode while the game is still open. For up to 12 hours your party will find treasure and have various encounters. With a Nintendo Switch Online membership you can even encounter other player’s parties and earn better rewards. I’ve mainly found experience boosters which are very helpful and I recommend you use this functionality any time you can.

Sailor Seth winds up in a storm, gets saved by a Crystal’s powers and washes ashore in an unfamiliar land. He then meets princess Gloria, whose kingdom Musa has fallen after the four Crystals disappeared. She is on a quest to restore them, otherwise great calamities will destroy other kingdoms as well. By chance Seth meets Elvis and Adelle. Elvis is looking for Asterisks to uncover secrets in a book. He and mercenary Adelle travel together. Honestly none of the characters have interesting back stories. The fact that they start looking for the Crystals together, you know the main plot of the entire game, makes zero sense. Their only connection is that they met. The main story of Bravely Default II in itself is nothing new either. You’re searching the land for valuable objects to prevent some undefined disaster. It just feels very uninspired and leaves me wanting more.

Praise the heavens for side quests though. Sure, running around and fetching things for villagers doesn’t usually add much to the story. A lot of the side quests in Bravely Default II however, come with cutscenes or party chat that add depth to your characters. Party chat is a feature that displays conversation between the party members. If you want to care more about them, and by that the story, I strongly recommend you check out Party chat whenever one is available. If you’re just in it for the grind you can simply ignore it without missing out on essential information.

When I first started playing I was very conflicted about the look of this game. The people in Bravely Default II are chibi-like models that move rather stiffly in most cut scenes. It comes down to taste whether or not you like this style, but I personally don’t. The monsters on the other hand, more or less in the same style, look amazing. There’s just something very inventive and cool about their designs. I’ve made a ridiculous amount of screenshots each time I encountered a new awesome looking monster. And then there’s the towns with their watercolour style. Simply breathtaking. I recommend you zoom out to look at the town overview in both day and night time to admire them. I’m so happy with the visuals of the monsters and world, that I even took a liking to the chibi people. They are charming in their own round headed way.

The music in Bravely Default II changes depending on your location. There isn’t a whole lot of variation per area however. You spend a lot of time in the same place when you’re grinding, so you might get sick of the same tune after a while. It didn’t bother me personally since I find the background music subtle enough. All the dialogue (except for party chat) in the game is available in Japanese and English audio. I was surprised to hear a wide range of English accents, which helps build the characters. After a couple of hours I switched to Japanese audio because I enjoy that better in RPGs. I also find it cooler to hear characters shout things in Japanese during combat. The combat music is very exciting and permanently stuck in my head, and I don’t mind that one bit!

Being designed for the Nintendo Switch you can expect the game to run smoothly and it generally does. I really only close Bravely Default II to check in on my villagers in Animal Crossing and then start it again. That goes very fast and even when I had it open in sleep mode (for exploring of course) it may give a tiny stutter but picks up straight away. The only complaint in the performance department is the delay to open menus. Especially when I’m exploring the open world, opening the menu generally takes a second or two. Although definitely not game breaking it’s annoying and honestly surprising given how well the game performs otherwise.

My eyesight isn’t 10/10 and playing on the TV quickly became exhausting because there is quite a bit of small text. Apart from the subtitles there’s plenty of information about moves and items. Hence I only played in handheld mode and wouldn’t have wanted it any other way. It’s super easy to pick up for half an hour during your break or while your food is in the oven eg. Grinding while watching Netflix in the background can be very relaxing after a busy day. I’ve played several stretches of 2-3 hours and never ran out of battery life either. Definitely recommend it if you like to play handheld!

If turn-based JRPGs are your thing or if you’ve been looking for the perfect game to get into the genre: buy Bravely Default II. It has all the elements of a classic turn-based RPG and explains them perfectly for new gamers. The story isn’t innovating, but the battles are fun and you’ll put many hours into the game before finishing it. In that regard alone it’s going to be worth your money. For reference I spent approximately 7 hours in the prologue.
On top of that the monster design is cool and the towns look magnificent. Whether you like chibi characters or not, they will grow on you as you get to know them better along the way. I’m looking forward to putting in many more hours at my own pace, exploring dungeons and battling monsters. And I guess helping the princess is neat too.

Get your copy of the game here.