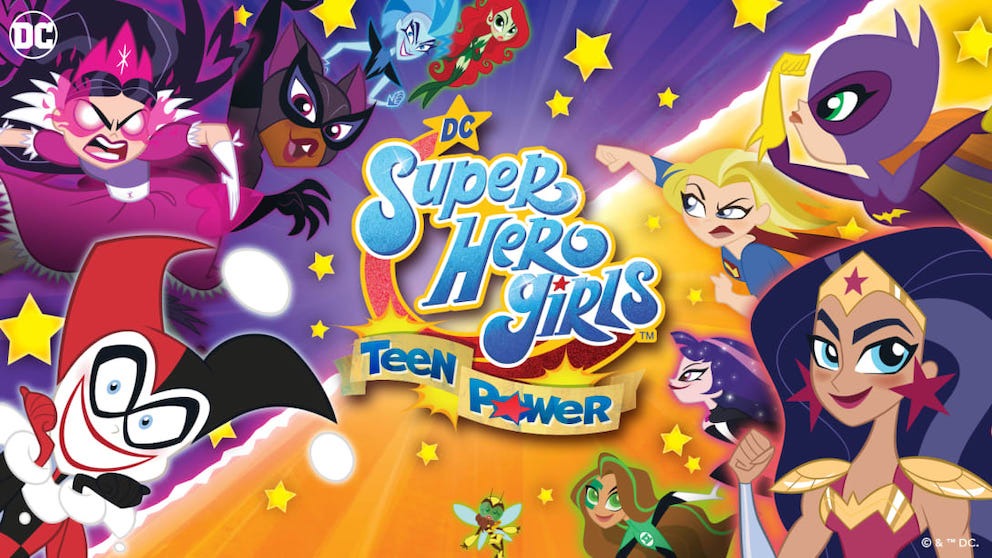 DC Super Hero Girls: Teen Power is the new video game made by TOYBOX Inc. for the Nintendo Switch. The game released on June 4th and is based on the television series of the same name. The TV series by Warner Bros runs on Cartoon Network. While thus definitely aimed at teenagers and children, let’s see if this game is worth your time and money.

TL;DR
Keep in mind this is targeted at a younger audience and I assume you’re not buying it for yourself.
Although I’m not judging if you do.

To my surprise, there is a lot to do in this game. DC Super Hero Girls offers great replayability and choice in what you want to focus on. Certain battles are of course inevitable if you want to finish the main story. And you should, because you will unlock more playable characters and side missions as you progress through it. You can even start a new game+, which is a super nice feature. This will allow you to power up every character and explore their unique fighting styles more. And of course earn more money and buy all the outfits.

DC Super Hero Girls heavily focuses on the battles against rogue toys and robots. For most of these missions, you can choose the character you want to play with and choose two supporting characters. Completing battles and missions will earn you points you can use to power up. Choose wisely though because these upgrades don’t come cheap! The battles themselves can become a bit chaotic, but are generally a lot of fun. You aim at getting combo’s to smash an opponent for additional damage. If you dodge an incoming attack at the right time, you can use a counter-attack. Your super ability can be charged up immediately by picking up items, even if you haven’t unlocked it with that character yet. The supporting characters actually deal a decent amount of damage and use their own abilities whenever they are ready.

The game also features a handful of real boss battles. They consist of several phases and will require you to think, rather than just smash away. You’ll need to use the environment to your advantage to disable the boss’s weapons or abilities. It’s very recognizable for experienced gamers, but kids might struggle and need your help. Which I think is actually a good thing, and it can be a nice and fulfilling gaming experience together.

There are three main areas: Old Town, Hob’s Bay and Metropolis High School. In those areas you can walk around freely. There you can accept side missions from certain NPC’s. There are quite a lot of side missions and I did not focus on them, but they vary in what you have to do. Some of them are basically battling against enemies, but others require you to search for something around town or talk to people and then report back. It’s also noteworthy that certain missions can only be accepted by specific characters. That’s not a problem because you can switch characters any time you want while you’re exploring. Completing said missions gives you nice rewards, including points to power up your characters. I recommend doing some more side missions if you’re feeling too weak in battles for the main story.

DC Super Hero Girls not only focuses on the hero aspect, but also on the teenager aspect. Metropolis therefore has its very own social media network – Supersta. While exploring, you can open up your camera and take a picture. You can immediately apply a filter or strike a different pose. After you’re done taking the picture, you’re asked if you want to post it to Supersta. If you do, people will follow you and give likes, they might even comment on your photos! You’ll receive notifications from Supersta after posting, but you can turn that off in the settings of the game if you find it annoying. Apart from getting a high from all the likes, Supersta also leads you to certain locations for your missions. There’s even a side mission that you can only start once a character has reached 300 followers.

No, you can’t play DC Super Hero Girls in VR (yet? Who knows). But you can visit the Toy Store in-game to play VR. It’s training mode in disguise. You can choose any character and unlock their abilities for free to practise combat. It’s also a great way to try every character’s unique abilities before you decide your favourite. That way you can focus your power ups on the characters you like best. In this VR mode you can even choose the music. I think this is a nice and helpful addition to a game like this. Get to know every character’s abilities and find what works best for you.

Teenage girls not only want tons of likes on social media. They also want to spend all their precious money on clothing items. In Metropolis, there are two types of clothing stores: “regular” clothing and “super” clothing. Completing missions can unlock new clothing items for specific characters. There aren’t a ton of options, but there are about 5 different complete outfits per character. Apart from collecting money to buy said clothes, the game also encourages you to collect hamsters. They are hidden across the maps and in missions, so collecting them all is not easy. Another “collectible” is the graffiti of superhero and super villain logos. You need to take pictures of all the logos and show them to a specific NPC to receive rewards. I didn’t explicitly go collectible hunting, but it’s a pleasant surprise seeing one of the logos or finding a hamster while exploring.

The game consists of seven chapters, each divided into smaller episodes like a TV show. There’s quite a lot to do besides the main story: Superstagram, shopping, side missions, hamster mascot hunting… While I definitely spent some time doing all that, I tried to focus on the main storyline and spent about 10 hours to complete it. But I am of course an adult and experienced gamer. I did not need the additional experience from side missions to be able to succeed in the main ones. The intended audience for this game will definitely spend a lot more time to be able to complete the story for the first time.

LexCorp has decided they want to renew what’s known as Hob’s Bay. It’s an old piece of town completely in ruins, but it has a lot of potential. For some reason, he thinks it’s a good idea to have teenagers decide which buildings should be built as part of the project. This is done through funding, which means you pay for the buildings you choose. But someone is sabotaging the project by releasing hacked toys and robots that destroy the town and attack people. The superheroes keep fighting off the threats to save the town and try to figure out who is the mastermind behind all this before it’s too late. Could one of the super villains be behind all this?

DC Super Hero Girls of course has superheroes. The six superheroes are Batgirl/Barbara Gordon, Supergirl/Kara Danvers, Wonder Woman/Diana Prince, Zatanna/Zee Zatara, Bumblebee/Karen Beecher and Green Lantern/Jessica Cruz. While you will often see all of them in cutscenes, only Batgirl, Supergirl and Wonder Woman are playable characters. They all have a very outspoken character and every detail, like battle phrases, walks and poses, matching their personality. Their super abilities are also unique for every hero and match my expectations. Supergirl has Heat Vision for example and Wonder Woman the Lasso of Truth. Because Supergirl can fly and has laser eyes, she felt very much OP, just like her more famous cousin. Although I played with every hero, I definitely went with Supergirl the most. Jumping puzzles and intense battles just are a lot easier with her.

There are no superheroes without super villains. The villains in DC Super Hero Girls are Harley Quinn/Harleen Quinzel, Poison Ivy/Pamela Isley, Star Sapphire/Carol Ferris, Livewire/Leslie Willis, Giganta/Doris Zeul and Catwoman/Selina Kyle. Again, only three of them are playable: Harley Quinn, Catwoman and Star Sapphire. Just like the heroes, they have their own unique abilities and personalities. You unlock them as playable characters during specific missions where you wind up working together. Apart from those missions I did not use them, because at that point I had already powered up my heroes. However, they sure are a lot of fun to play with. If you start a new game+ you can definitely also power up the villains and play as them to switch up your game and keep it interesting.

Since the game is based on the TV series, I want to know what it’s about before I judge if the game is a nice addition. The TV series is actually based on a web series and launched in 2019. The show is developed by Lauren Faust, who also developed My Little Pony: Friendship Is Magic and Super Best Friends Forever. Here, you follow the adventures of the teenage version of DC superheroes and supervillains, who attend Metropolis High School. They have to deal with their choices both regarding their superhero and secret identities. The show also features a lot of physical comedy and emotional storylines. Although we follow six super villains, a large array of other villains appears as well. In 2020 a mobile game containing microgames was already released. Fun fact: the English voice actors of the game also voice the TV series!

For a game in its genre, it definitely has a lot to offer and is doing a lot of the right things. Things I honestly didn’t expect. The fact that you can walk around freely and accept the missions you want to do, feels like a regular RPG. Training mode and especially new game+ give the game great replayability. The combat and some jumping puzzles weren’t always super easy. The different types of missions and enemies keep you entertained, even as an adult. Sure, the story didn’t intrigue me. I figured out who the evil mastermind was the moment we met them. For 60 euros, the game actually has a lot to offer, it felt steep at first but all things considered: it’s a justifiable price. Take into consideration that the intended audience will not blaze through it and have to repeat missions until they get it right.

The only thing that’s actually missing for me is co-op play. The Nintendo Switch is a great family console, and allowing a sibling or an adult to join in for the more difficult battles could have been a great advantage. Especially given there are six playable characters, it’s honestly odd they didn’t add this feature.

Big thanks to CDMedia for the review copy, and click here if you’re interested in buying the game.