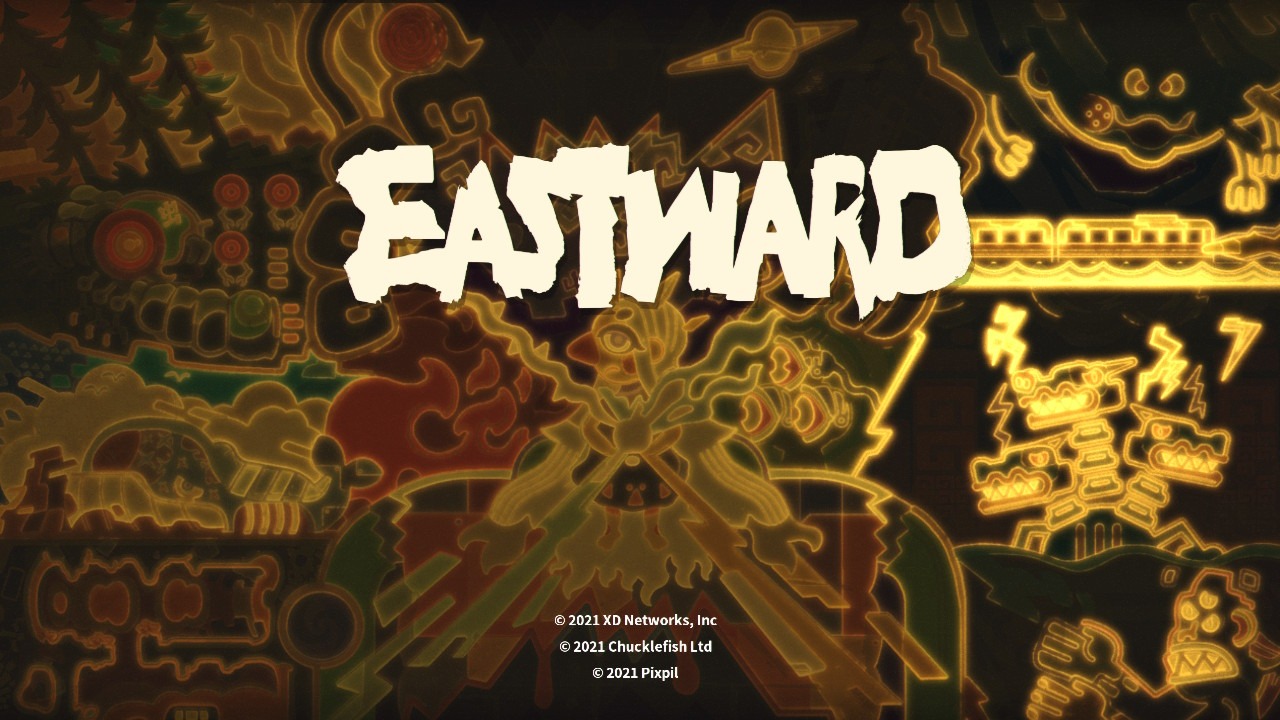 Before starting this Eastward review I initially thought: “whoa a €25 game with a banging soundtrack and fancy pixel graphics, I’ll get through that in an hour or eight and get to writing”. Dear readers, I could not be more wrong. Eastward is a thirty five hour journey that is worth more than it asks from you.

Disclaimer: This Eastward review contains screenshots of some of the first bosses. Nothing beyond chapter two is portrayed. The rest of the world is up to you to explore and discover.

Eastward is an indie action-adventure role-playing game that takes a lot of inspiration from games like Zelda and Dragon Quest. From the top down view and pixel graphics to the chip-tune background music. It all fits that classic retro game image like a glove, with some modern technology like 60fps and HD touch up.

Like any book the start and finish are the true main highs. Three chapters in, Eastward loses some of its momentum and the train slows down. But the pace picks back up when you race towards the finish line. Like always we do our best to keep our reviews spoiler free so you can safely enjoy this Eastward review.

The premises of Eastward are set with its opening cutscene. You play as John, the top tier digger in an underground town called Potrock Isle. During your digging you stumble upon Sam and take her in. While she is not really John’s daughter, every interaction makes it seem so. John is a man of few words and Sam fills in all the blanks. He rushes to her rescue when she is in trouble and cares for her not with words but through actions. And those usually involve whacking things with his frying pan and also using said frying pan to feed Sam.

While the pacing isn’t optimal it isn’t as bad as Triangle Strategy. The mid section of Eastward was getting sluggish and I pulled myself through it for this Eastward review. But after that, Eastward goes in a totally different direction. And that on itself could be a problem for some.

The plot takes some turns and twists and adds in different layers where you have to pay attention to fully comprehend the situation our characters are now in. I personally liked it because I also like movies with subplots, twists and open interpretation. If you want an answer to all the mysteries Eastward has shown you, prepare to have some questions unanswered.

It felt fairly familiar when I went through the Potrock Isle arc. An evil mayor ruling an underground town and nobody is allowed to leave. Or they are exiled to the surface, that is wrecked by something called the Miasma. It felt like playing the opening chapter of Fallout 3, then again I am a huge Fallout fan and could surely find ties to Fallout and Tiny Tina’s Wonderland in almost anything.

But during your escape John gets hurt badly and something inside Sam awakens. A double or an alter ego starts talking to her, without any of that childish enthusiasm Sam has. It only deepens the mystery of her character even further as she suddenly unlocks powers in order to save John. Solomon makes its entry and coincidentally creates a shortcut for Sam to rescue John. After being captured by the mayor, escaping and fleeing to the surface, you realize that the Mayor was lying all along. There is a beautiful world outside Potrock Isle, which is yours to explore and discover.

You hop aboard a train that takes you to the next chapter and location of Eastward. One where you encounter new characters with good written dialogue and personalities. You explore the new locations each with their small intricate stories all within the major story about John, Sam and how Solomon, the Miasma and Sam’s alter ego are all tied together.

Bonk! Back to pixel Hell – Gameplay

While the story pacing of Eastward is not perfect. The gameplay pacing is sublime. Each new feature is introduced steadily and leaves you just enough time to fully comprehend it. And then you get put in a situation where your new found skill or tool gets put to the test.

New puzzle elements are explained in intuitive ways and you will never be stuck for more than ten minutes on a single section. After those ten minutes, all the following puzzles have the pieces falling in just the right way.

Not only does it tackle the puzzles the right way, it builds up the combat and its difficulty right on that sweet curve. Every boss you encounter has some trial and error phase before you end them like a Fromsoft pro going through their fifteenth Elden Ring run. Whipping out your shotgun or flamethrower to take care of the trash that inhabits the world and threatens your resemblance of a family. You’ll end up switching between Sam’s powers to stun or shield and using John’s deadly tools to finish it all off. The difficulty builds so steadily you won’t feel overwhelmed and some clever thinking can reap the rewards on difficult parts.

The game within the game – Earth Born

So a thirty five hour game wasn’t enough for Pixpil. They added a full retro classic game inside Eastward that you can spend a couple of hours on if you want to. For the purpose of the Eastward review I didn’t finish it and only dipped my toes in for a bit.

Earth Born is an old-school jrpg inspired by Dragon Quest with a roguelite twist. Your ultimate goal is to defeat the Demon King by recruiting party members and collecting items to increase your power.

You roam the map and defeat unique monsters in turn based battles. Finding your way to the Demon King’s castle and trying to defeat him. Outside of Earth Born and inside the world of Eastward you can collect and use tokens at vending machines. Those vending machines award Pixball monsters that unlock an item in-game for Earthborn. Hunt down treasure chests in Eastward to collect them all.

Runs like a well oiled train on fresh tracks

The Nintendo Switch runs Eastward perfectly. I had a solid 60fps across the board with two drops that I noticed and two hard crashes to the dashboard. But overall it never felt like it was pushing the limits of the Nintendo Switch. Most of my Eastward review period was done handheld as it really was the best way to play it.

Eastward has the same pixel style art as Octopath Traveler; but with a lot more color and a smidge of added detail. The characters you play and meet are all unique and have tiny quirks in their animations. The world feels alive as the weird monsters blend in with nature and the apocalyptic vibe Eastward has.

The soundtrack is composed by Joel Corelitz and he did a real banger for Eastward. Joel Corelitz also worked on Death Stranding for some of the additional music and co-worked on the music for Halo Infinite. The music really nails it, making the chases or dungeons feel so much more tense.

Eastward was a journey I started off with no exceptions aside from a short story driven game. For its price Eastward is a steal when it comes to content and the quality it has. Pixpil set the bar high for their Debut game and they definitely got on my radar with Eastward. If you have a Nintendo Switch and are looking to get through the calm game release season we are in, I totally recommend Eastward for you.

Thank you CD Media without you I would have never tried this gem.