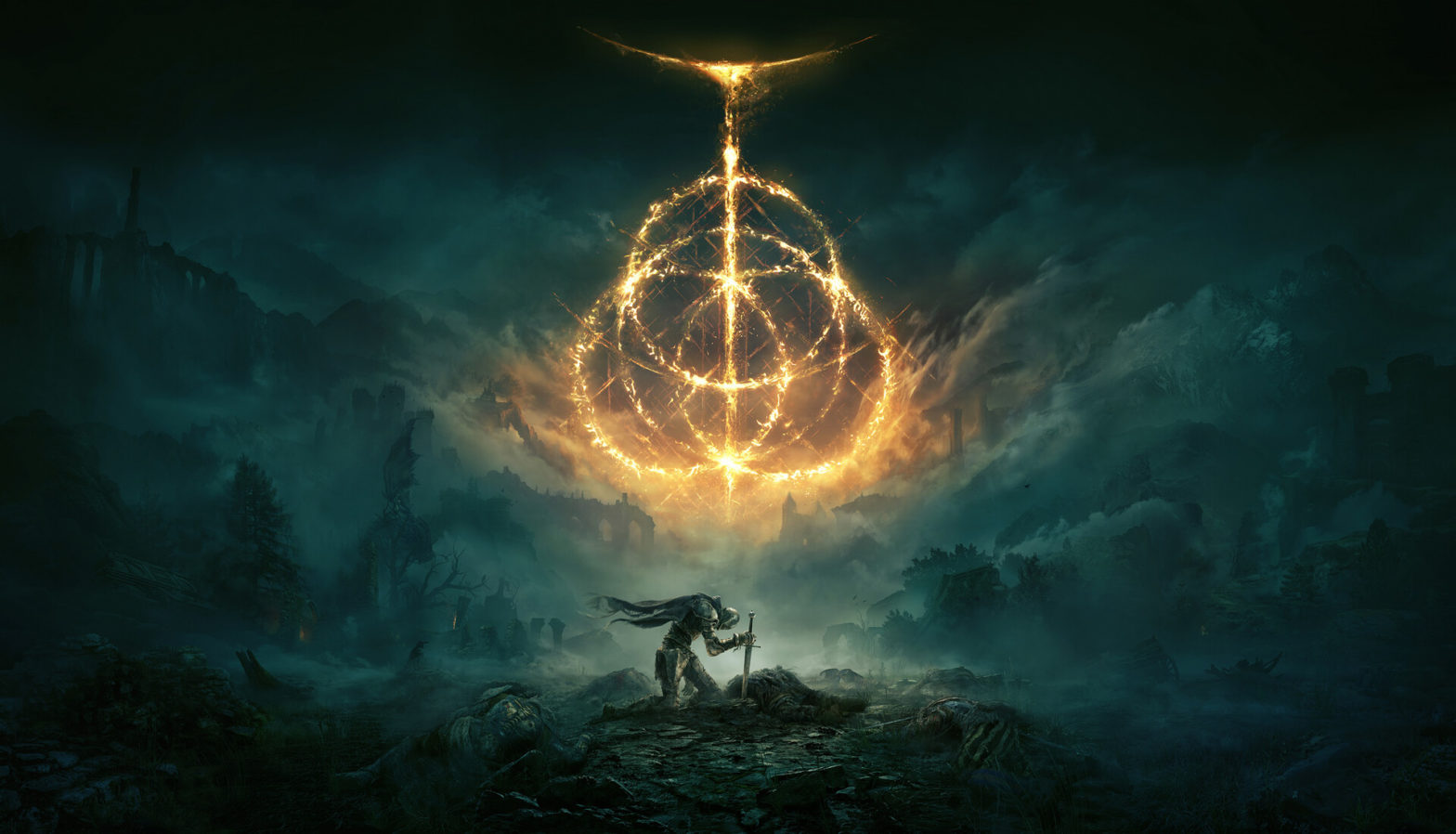 This Elden Ring review is based on the launch version of Elden Ring. This review will be 100% spoiler free and will only showcase some screenshots from later areas and monsters. FromSoftware games are the masters of the soulslike genre. The name soulslike stems from the Souls series created by Hidetaka Miyazaki. Not only a video game director but also a designer, writer and executive of FromSoftware. Known for Dark Souls one to three, and Sekiro: Shadows Die Twice and now the masterpiece Elden Ring.

Elden Ring is still very much, to the core, a soulslike game. If you do not know what you are getting into or have never played a soulslike, your experience with Elden Ring will vary. I have played soulslike games and I like them. I see myself as a casual player that is driven by the rush of adrenaline and sense of accomplishment after defeating a difficult fight. The options soulslike give when making builds and creating that fighter that you want. The analytical thinking after dying in a boss fight, figuring out attack patterns and learning move sets. Add in the feature that if you don’t pick up your dropped exp and die again, you lose it all. Yeah, I can definitely say soulslike games are something I like, and Elden Ring is the best one I’ve played so far.

Gameplay – FromSoftware are the masters of the Soulslike genre

Soulslike games have a higher than average difficulty, bosses will decimate you and grind you to a pulp. You will need to learn their move sets, time your dodges and perfect your parries in order to defeat even the easiest bosses in a soulslike.

A small health bar to start with, a limited stamina bar and even the commonest of enemies hitting you hard and fast. The learning curve is steep when you get into this genre, and it is not for everyone. I do not know how many times I died during my Elden Ring review, but it is somewhere between 100-200 times. Are you ready for that?

Elden Ring is a soulslike, but the changes within Elden Ring make it the best one ever.

The world of Elden Ring

Soulslike games have unique level designs, cleverly thought-out mazes that weave through the map. Shortcuts to discover and checkpoints to unlock after a war of attrition against the monsters that inhabit it.

Elden Ring is an open-world experience. So you might be scared that the unique dungeon crawl mechanics are gone. Well fear not, the open world is filled with dungeons. Smaller ones with an easier design and fairly easy boss. To the mega dungeons with multiple bosses, more routes and filled with secrets and shortcuts.

You are a tarnished that has awoken. Guided by the light of grace you are to find the pieces of the Elden Ring and complete it once more in order to become the Elden Lord. You scour the land for runes(exp) and increase your power to defeat those who have the pieces of the ring.

Some sites of grace have a subtle beam of light pointing in a direction that guides you to the next big dungeon and boss. You are free to follow the light or simply explore the lands in between.

The true endgame is the fashion game

Elden Ring has only one endgame goal, looking cool. Doesn’t matter how hard you hit or how fast you are. You are going to die, and you are going to do it a lot. You might as well look damn good while bleeding out.

The armour pieces and weapons are so well-designed and flavourful that I actually chose the fashion of minor stat increases sometimes. My biggest regret was trying out the new expanded magic system for my first character. I had so many cool swords, daggers and two handers I just couldn’t use. There I was, stuck with my wavy wooden stick and fancy, stylish robes and pointy hat.

A work of art and horror

The world and denizens of the Lands Between are a work of art. Each zone can be so diverse and unique. From the lush grasslands to windy hills and blood filled lakes. Each with their own unique set of monsters, bosses and literally living nightmare stuff.

The art-style soulslike games bring, have always drawn me in with a morbid curiosity. The monsters feel so familiar, but upon closer inspection, there are details that make them horrifying. You will recognize the bigger dungeons from afar, like being a castle or mage tower. But upon closer inspection, they will be corrupted or have nests of mutated birds in them that clearly show something is off. Something just a little different from our normal reality.

The artwork at the start of the game and during the loading screens are so beautiful and amazing. I would buy it and hang it on my wall the instant I could get my hands on it.

Sense of exploration and accomplishment

What the open world structure of the Lands Between brings is more freedom when you want to tackle a big boss. Soulslike games often have a forward progressing maze structure. Where a big boss or encounter blocks your continuation until you beat it, or give up. For more casual players, it typically leads to an unfinished game and frustration.

Elden Ring has sites of grace that you can fast-travel to, and most bosses have a site of grace close to their encounter. If you ever feel stuck, you can take the loss of Runes(exp) and explore somewhere else until you feel confident and strong enough to give it another shot.

Exploring the map has so many hidden mini bosses, resources and even dungeons stuck in the nooks and crannies of the landscape. Going off the beaten path and finding a new dungeon feels rewarding. Digging in and trying to complete it feels fun, and when it doesn’t, you can simply go exploring again. Harder roadblocks can be avoided by taking the long route and the open world offers many ways to tackle encounters.

The unguided open world is still a better one

Your map is a drawn picture of the land. The only pictures are those of the sites of grace you found or dungeons entrances. You can set up to 5 markers for places you deem important or spotted from afar. As for the rest, no guidance, no hand holding. Just your eyes and trusty mount.

The day-night cycle brings different enemies as time progresses. Nighttime can bring out more bats or dark knights on ghostly horses. Storms come and go as you explore, and the eerie sounds of the Lands Between keep you on the edge of your seat.

I’m currently on my second character, a more melee focussed play style that I usually do. And in the first zone I found a new dungeon that I missed the first time. You aren’t running from marker to marker, you are exploring the land and every detail in it.

The Elden Ring review was done on an Xbox Series X on a 4K TV that has a max refresh rate of 60fps. And in my experience it was wonderful. Some instances of stuttering appeared, but that was closely after launch. A few updates later and it runs even better, for me. The experience of how Elden Ring is really dependent on the platform.

The Xbox Series S has problems running Elden Ring, even in performance mode. The PC version has stutters, freezes, crashes. And on PS5 the best version of Elden Ring is the PS4 version running on a PS5. So yeah there are some issues going around.

Like I mentioned earlier, it runs really well for me. I explored 4 different zones and all ran exceptionally well. Except for the online features, at launch Xbox players could suffer from a wrongfully patched version that didn’t automatically update. You were unable to connect to the online features and had to wait until they fixed it.

Right now, the latest patch fixed the online issues, and I’ve been basking in the glory of pickle messages and jump off cliff tips. Touching bloodstains and laughing my ass off when someone fumbles down a just too deep pit. FromSoftware will definitely keep working on Elden Ring and fix all the issues.

Not worth it. Is 30fps worth it for an almost unnoticeable visual upgrade? I don’t think so. Every frame matters in Elden Ring. Every millimetre dodged is the difference between life and death.

I even didn’t notice that much of a difference when it came to quality mode. There is a huge amount of blur when it’s toggled on, so you won’t even be able to enjoy it fully in the fast-paced combat.

It looks good and it plays well. Everything feels responsive, you can see the attacks coming clearly and learn the patterns. Perfecting your movement to as close to an attack as possible to get the ultimate retaliation move. This is the mode for me and will be for many.

As I mentioned above, online features were non-existent at release. They do add a lot to what Elden Ring has to offer. From inviting a friend to play together in coop to invading someone’s worlds and taking them on in a PVP battle.

And the more simple features like seeing the ghosts of other players just for an instant. It makes you feel connected to all other players suffering like you, dying in that same hallway over and over. You can write messages to leave hints and warn of an ambush ahead. Or you can trick people into jumping off cliffs to their death.

Furthermore, you can invite another player to take on a boss you are stuck in near summoning shrines. Or sign yourself up as a helper for players in need. Showing off your ultimate cool fashion and using emotes to approve each other’s looks.

Some soulslike fans insist on a first blind playthrough, no online trips, to experience the world in its fullest. And yes, some unique traps get spoiled by messages if you read them, taking away a moment of shock when it happens. And accomplishment if you eventually overcome it.

I’m on my second character with a new build that I like playing a bit more. I think that alone says enough about how good Elden Ring is. After pouring 35 hours into it for this Elden Ring review, I want to regrind the first part of the game, go over all those deaths again to get to the point I was at with my mage character and beyond.

I’m leaving behind a level 39 character to start over, and I know I will pick up the mage again sometime later.

The world and diverse options to progression really make Elden Ring the best soulslike there is right now. The game is close to perfect if it didn’t have its range of technical issues across all platforms. Definitely wait a bit if you aren’t sure it will run on your pc, or if you own an Xbox Series S maybe hold off until you can upgrade to an Xbox Series X.

From the first hours I started playing up until those I did yesterday, I never doubted a second about the score Elden Ring would get from me. I’m glad I got to play this because it’s a damn good game.
Thank you, smartoys.be for sending BGeek.eu an Elden Ring Collector’s edition!
Check out our instagram for the rapid unboxing.