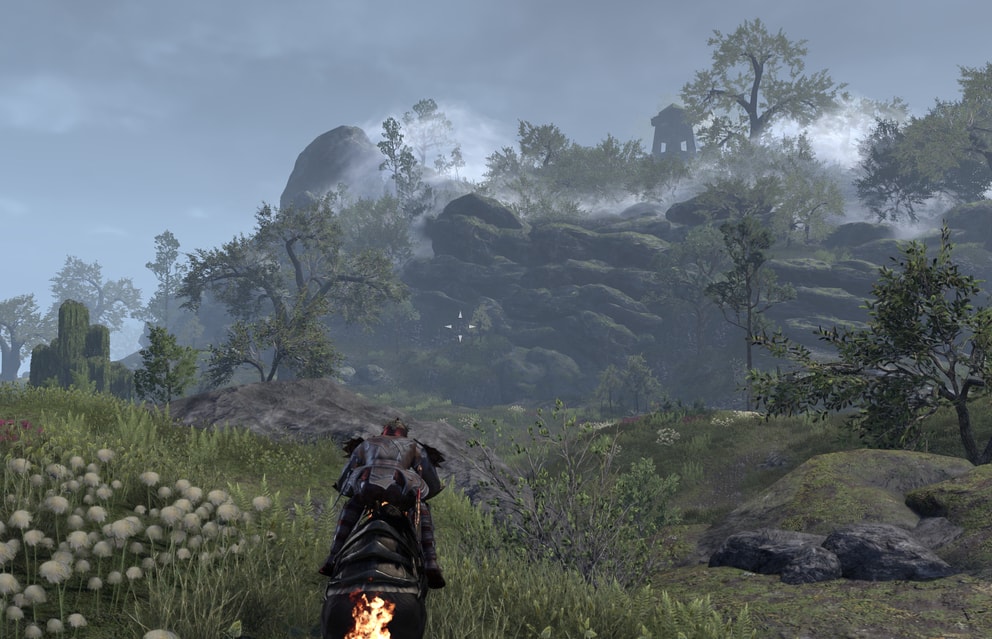 This Elder Scrolls Online Blackwood review is based on the PC release and has not been tested on any console. We played as much content as possible the last few weeks and sat down to discuss if it is worth a purchase; or if you are better off waiting for the ESO Plus release.

A new year, a new chapter. Zenimax is not putting any brakes on their yearly chapter releases. Blackwood is so full of content that for this Elder Scrolls Online Blackwood review I focused on the main quest; my fellow BGeek editor Romy went about as usual and covered a wider range of what Blackwood has to offer. We figured this was the most efficient way to get this Elder Scrolls Online Blackwood review out as fast as possible; while exploring the new chapter as much as we can.

But not all of what Blackwood has to offer is as intriguing or gratifying as some of the other chapters. At some point we were laughing with the jokes in certain quests or enjoying a dance off with a dog. At other times, however, we also shared a moment of disappointment.

Blackwood doesn’t come with updated visuals so we won’t be covering that. It runs extremely well on our RTX2070 and RTX3080 with everything maxed out. On top of that we had no issues or bugs when it came to questing, not even a single disconnect during our time of playing. Our guildies did report some bugs but overall this was a really smooth launch and any breaking bugs were patched almost immediately.

We usually avoid spoilers when it comes to reviewing games. Alas for the Elder Scrolls Online Blackwood review we felt like it was unavoidable. In order to understand why we didn’t like this particular chapter’s main story we have to tackle some topics that spoil the experience. Thus you have been warned.

Maybe, just maybe, the prologue quest for Blackwood set our hopes a bit too high. We enjoyed it and were looking forward to diving into Deadlands portals and taking on the Daedric monstrosities that roam there.

We have met Eveli, Lyranth and Beragon in the prologue. Blackwood introduces several other characters during the main quest but none really stood out. Elam Dress is the Dark Brotherhood leader of the Blackwood chapter and during our playtime for the Elder Scrolls Online Blackwood review the most memorable one.

We both found Eveli the wood elf too gimmicky and either loved the interactions with her or didn’t like them. Some of her puns made her really stand out and had us chuckle. They fit her personality and character well; maybe she just wasn’t our type of loveable companion. Her brother Beragon is absent for most of the story except for a short appearance and is quickly forgotten after that.

We felt like Lyranth was around to make you question who the bad guy really was. And it worked, I kept wondering what her motive was and expecting a plot twist. That eventually didn’t happen, which maybe was the plot twist?

Then we have Vandacia, a Leyawiin Councillor that is obviously the bad guy. If you pay attention to the dialog and characters you meet, the main storyline will not surprise you at all. Some of the plot twists are so heavily hinted towards, that it won’t come as a surprise that Vandacia is in fact the Waking Flame cult leader. After two interactions with him it’s so obvious that he’s up to his chin in the plans of Mehrunes Dagon.

During the story and your endeavors in the Deadlands you will hit several warded doors. These require you to match symbols that the Mysterium Xarxes projects. In order to complete these puzzles you won’t even need to look at the book.

When you hit the right symbol the block is lit on fire and Eveli gives verbal confirmation, just in case you missed the glowing symbol and fire. We get that these puzzles don’t have to be over complicated for people who are doing the quests on multiple characters. If you are just grinding for exp or champion points these kinds of puzzles are a blessing.

Blackwood starts off with you searching for a missing councilor of Leyawiin. You find her on the brink of death with a Dark Brotherhood signature next to her. This starts off a quest chain where you search for the remaining Councillors and try to warn them before they get assassinated.

This means a lot of running around and dialog where everyone has no clue what is going on. Although, if you played the prologue you have a really solid clue about what is going on. If you played the prologue first some dialog will differ; if you choose that dialog you still end up taking the route like you know nothing. Rushing in to save some NPC’s just resulted in them dying out of nothing, even after killing their aggressor. The illusion of choice is not that well hidden.

You learn that the councilors were targeted because they might know something about the so-called Ambitions. These Ambitions are said to be very powerful daedric weapons. Since these Ambitions are important enough to start killing councilors, we of course go out to find them.

On your search you stumble upon Calia and Destron, twins who are locked in a vault. Protected by several wards and heavy daedric defenses it’s obvious that these two are living weapons and the Ambitions you are searching for. Yet your companions are oblivious up until the point where Destron electrifies a dozen enemies at once.

Blackwood the prologue to the next chapter?

The worst part was that it ended so abruptly and open ended. After finding three of the four ambitions you defeat Vandacia and save Blackwood from Mehrunes Dagon’s invasion. The ambitions go into hiding from Mehrunes Dagon and his followers, because they are still at risk of being captured and offered to the Daedric god. And after a short speech and celebration Eveli almost litterally says “See you later” and this ends the main quest.

Where and who is the fourth ambition? What happens with the other ambitions as they hide in the deadlands? Does Mehrunes Dagon simply give up because we killed the leader of a cult? The cult had many members and influential people among them, surely one of them will continue the plot. Welp, not for this Chapter.

This ends the spoiler section.

You are probably thinking, why should I get this chapter if the main story is so lackluster? Well the best part of Blackwood and our playtime were the side quests and random encounters you had while exploring the zone.

These side quests are funny, original and worth your time. Read the dialog, enjoy the characters and their quirky personalities. Revel in the absurd situations that they put you in and have a good laugh. We wish we could share some examples but the side quests have such fun twists we would hate to spoil them for you.

Portals to the Deadlands pop up at random on the map and stand out by their orange beam that shoots up to the sky. Entering them on your own will mean that you meet a quick end at the hands of numerous Daedric creatures or Dremora. Traversing through them with a small group is challenging and really fun. Not to mention astonishingly beautiful, if you’re into that hellish aesthetic of course.

You travel from island to island defeating anything on your path until you meet the final boss that protects the keystone. These portals are not linear and have several pathways to explore, but always end at the same point.

Probably the second biggest selling point of this chapter is the companions you can recruit. Each of the two available companions can be collected in Blackwood with a unique quest. Upon completion of that quest you unlock them for your travels and aid in combat.

Read this Elder Scrolls Online Companions article to get details on how they work. All we can say is that they simply work and it’s fun to have them beside you. Not only can you customize their looks; but their skills and gear as well. This allows you to create the perfect companion when you are exploring alone, or in our case in a party of two with two companions. This made our little group a lot stronger even when our companions were low level and ungeared.

For the purpose of this Elder Scrolls Online Blackwood review Stijn made a new character. Not only to test the chapter as a new player but the new tutorial as well.

The new tutorial zone is exactly what the Elder Scrolls Online needed. New players don’t get pushed into the latest expansion, which can be story breaking if you later return to vanilla content. Or it splits players from their friends that don’t buy the latest content.

The tutorial itself is still pretty straight forward and the zone isn’t that huge. But you get the basics of combat and movement. On top of that you also get some explanation on what each chapter entails. A short summary of what you can expect when entering the portal and starting your new adventure. This is exactly what Romy missed when she first started playing.

Blackwood is beautiful, green and damp, filled with swamp creatures, goblins and minotaurs. The zone feels and looks unique while still a part of Tamriel.

Blackwood is a swampy southern region located along the banks of the Lower Niben. It makes up the southernmost reaches of Cyrodiil and is ruled from the city of Leyawiin. The region also extends over the border into Black Marsh.

Both areas flow over into each other flawlessly and so naturally that you barely notice traversing the border. The area is beautifully green and swampy with some forests. We loved riding around from point of interest to point of interest and taking in the sights. Some vistas had mist flowing off the mountains or castles in the distances that had us stop and enjoy it for a little.

Blackwood is a beautiful region that fits perfectly between Shadowfen, Murkmire and Cyrodiil to the north. The Argonian and Imperial influences are present in the world, from architecture to clothing. It feels like both cultures adapted and blended into each other.

What we noticed during our quests or invasions into the Deadlands was the amount of background ambiance. Outside of our fighting field we had daedric creatures fighting humans or humongous Daedra fighting in the background. It made the areas we fought and ran around feel more ambient and alive. This small change has a huge impact on how you perceive the world and makes it feel alive instead of a set piece for the story.

That being said, yes we definitely enjoyed Blackwood. The main story might be a let down but it offers much more than just that. The zone, side quests and random encounters make up for the disappointing ending of the main story. But honestly they shouldn’t.

By all means, if you are a new player to the Elder Scrolls online get the Blackwood collection or Blackwood Collectors Collection now and here. Elder Scrolls Online on it’s own is an amazing game with tons and tons of content.

But if you already own the other chapters and aren’t convinced yet, the price might be a bit steep for the Blackwood Chapter. You could wait for a sale, which at this point we do recommend. Elder Scrolls Online doesn’t have any content that expires; old content is still relevant. Or you could wait a year and play it when it’s free with your ESO-plus subscription.