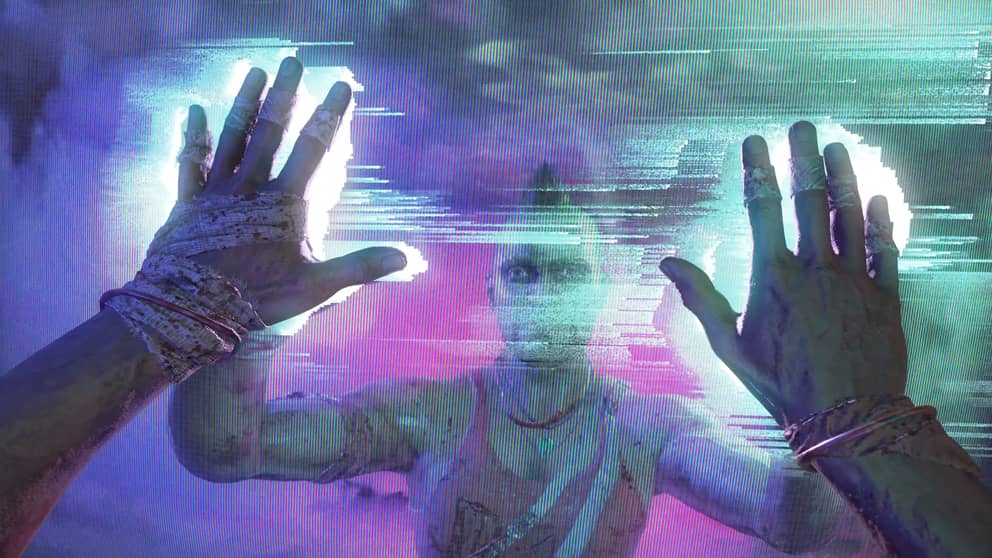 The first Far Cry 6 DLC: Vaas dropped last week and I dove into it like a maniac. Curious what Ubisoft would deliver on this return trip to Far Cry 3. And what these Far Cry 6 DLCs will look like. I was amazed at first but the honeymoon period ended quickly.

This Far Cry 6 DLC: Vaas is more a game mode than a story you play. The story is there, but only in the form of flashbacks that deepen the lore surrounding Vaas Montenegro and his relationship with the priestess Citra.

Escaping Vaas’ mind is fun the first few times, but suffers the same problems Far Cry 6 has, review here. Mainly being the bullet sponges and no variation in the activities; add to that a smaller roster of guns to play with and it feels like a downgrade.

The randomness of perks that drop from enemies or challenges; combined with the randomness of mods you get on your weapons, can make for frustrating runs where nothing goes right. Your build is all janky and you seem to be struggling to continue. Dying might be the best option but as a result you have to redo the same activities again.

Before continuing I want to mention that I’m a huge fan of the roguelike and roguelite genres. As seen earlier in my Curse of the Dead gods review I’m a sucker for overcoming challenges and learning from my mistakes. Or switching up my go-to-build to try something new to overcome a certain boss or challenge. So once I saw what this DLC was all about, I got ready to put my mind to it.

If you are going into this DLC for a deep story about Vaas Montenegro and playing him as he slowly slips into insanity. Well, you can not be further away from what this Far Cry 6 DLC: Vaas is.

The story picks up right after you defeat Vaas in Far Cry 3 and you, as Vaas, die. After waking up in a room full of televisions, the priestess Citra announces that you are trapped in your own insane mind. In order to escape you need to collect three pieces of the dragon blade, survive the challenges your own mind throws against you and overcome mindfucked puzzles.

It all sounds very fun but the story-telling ends about ten minutes after you start playing. After all, most of the story is brought through visions from the past that you witness, and are a part of the collectables you can look for. It’s safe to say that one play through will get you everything story related. And after an hour I was through my first run which included exploring the map at a slower pace and figuring out some of the mechanics.

So not that much of a story to enjoy, but come on, roguelites are fun right? Right? Well yes, they are, and at first it looks like this Far Cry 6 DLC: Vaas is exactly that. But after a few runs you will notice it lacks some features and elements that makes roguelites so much fun.

After you wake up in your own mind you will be able to use the shop and mirror. The shop allows you to collect your first and free weapon, the sidearm. The mirror allows you to spend cash to upgrade Vaas’ traits.

Cash is earned through killing enemies and completing challenges, cash is also lost upon death so spend it wise and fast. Along with cash, any of the powers you collect to create your build this run will also disappear upon death.

The shop contains several Weapon cases that contain your primary, secondary and specialist weapons. In order to unlock more weapons you need to unlock their respective challenges before you can buy them. Each weapon comes with a random set of mods and the more you upgrade a case, the more mods you get. Re-rolling weapon mods costs cash and the only free weapon is the sidearm.

The first sink for your cash will probably be traits. These are kept upon death and upgrade Vaas significantly. Each trait tree is also cleverly named after one of the sins.

These are your long term investments and get more expensive with each upgrade. But they add those much needed gadgets, camera, parachute and wingsuit. But let’s not forget they make death a little less punishing as well, like keeping a huge amount of cash after you die. So you can start a new run with better guns.

Dig inside your mind, unlock your potential

Now what is there to do in your own insane mind? Not that much to be honest, across the map there are seventeen activities. If you consider taking over a safe-house in a two minute shoot-out an activity.

Your main activities are the Memories, three of these are hidden on the map and reward the blade pieces you are looking for. Gun show activities unlock the remaining chests in the shop and reward you with a weapon. And last but not least we have the mindfuck puzzles. The latter I enjoyed the most as they are true mindfucks.

Gun Shows are basically waves of enemies rushing you and when you kill a certain amount of enemies you complete the challenge, the main activities are the same with small twists and bosses thrown in.

No bang for your buck

A lack of activities, a lack of weapons to fill up the roster or create some variety in runs are things I can look past. The biggest disappointment is that when you complete a difficulty, it’s the exact same map with exact same placement of activities and enemy patrols.

No new part of your brain is unlocked that throws different challenges or puzzles at you. It’s exactly 1 to 1 the same. The only difference is that the enemies have more hp and deal more damage. More bosses spawn in patrols and some new powers get added to the power loot pool.

I was unmotivated to grind, yes grind because it becomes a grind after a few runs, to the max mind level and try that difficulty out. The activities and results will inevitably be the same. This DLC is the true definition of insanity. Repeating things over and over expecting different results.

Roguelites are driven by the fluid builds you create on the fly and your ability to adapt to the situation. But most of all, the skills you as a player learn from dying. Giving enemies more hp will not improve your player skill, dying to buffed up enemies feels dull and annoying. While learning to perfectly dodge or parry brings a lot more satisfaction at the end of an encounter or boss fight.

Vaas’ mind is incredibly well designed. The palm trees and enemies are straight from Far Cry 3 and set the mood the moment you walk out of the first shack. It’s full of hidden, and not so hidden, insane wonders.

Did you see THAT?

Flying sharks, waterfalls of blood, an ocean of blood and seaweed hands. The mind space is filled with what-the-fucks that are references to Far Cry 3. Truly amazing for a fan of Far Cry 3 like me, but they won’t have the same impact if you haven’t played it.

Do I sound insane?

When it comes to sound there is only one thing that stands out. It’s the performance Michael Mando delivers once again as Vaas. His voice acting is so good, and it’s like he never forgot how insane Vaas had to sound and act.

The voice writing breaks the fourth wall at times as Vaas complains against the player for dying. He comments on his own vision and what happens in the world. In a certain instance I was sneaking up on a patrol and Vaas did as Vaas does, shouts out at the patrol calling them fuckers and asking what they are doing. My butt clenched and I hightailed it out of there.

Ok let’s wrap it up for this DLC. This review is getting pretty long for a few hours of gameplay. It’s not worth the purchase as a standalone in my opinion, you get some unlocks for Dani in the Far Cry 6 main game if you want to collect those. If you are a more casual gamer, the first few difficulties will be ok, but anything higher will just be too cumbersome to play through.

The Far Cry 6 DLC: Vaas feels more like an added game mode than a true DLC that expands the story of Far Cry 3’s villain Vaas Montenegro. I’ve become a bit more skeptical about its next release featuring Pagan Min.
If you feel like this DLC is something for you, get it here from the Ubisoft Store. Don’t forget to use your discount points.