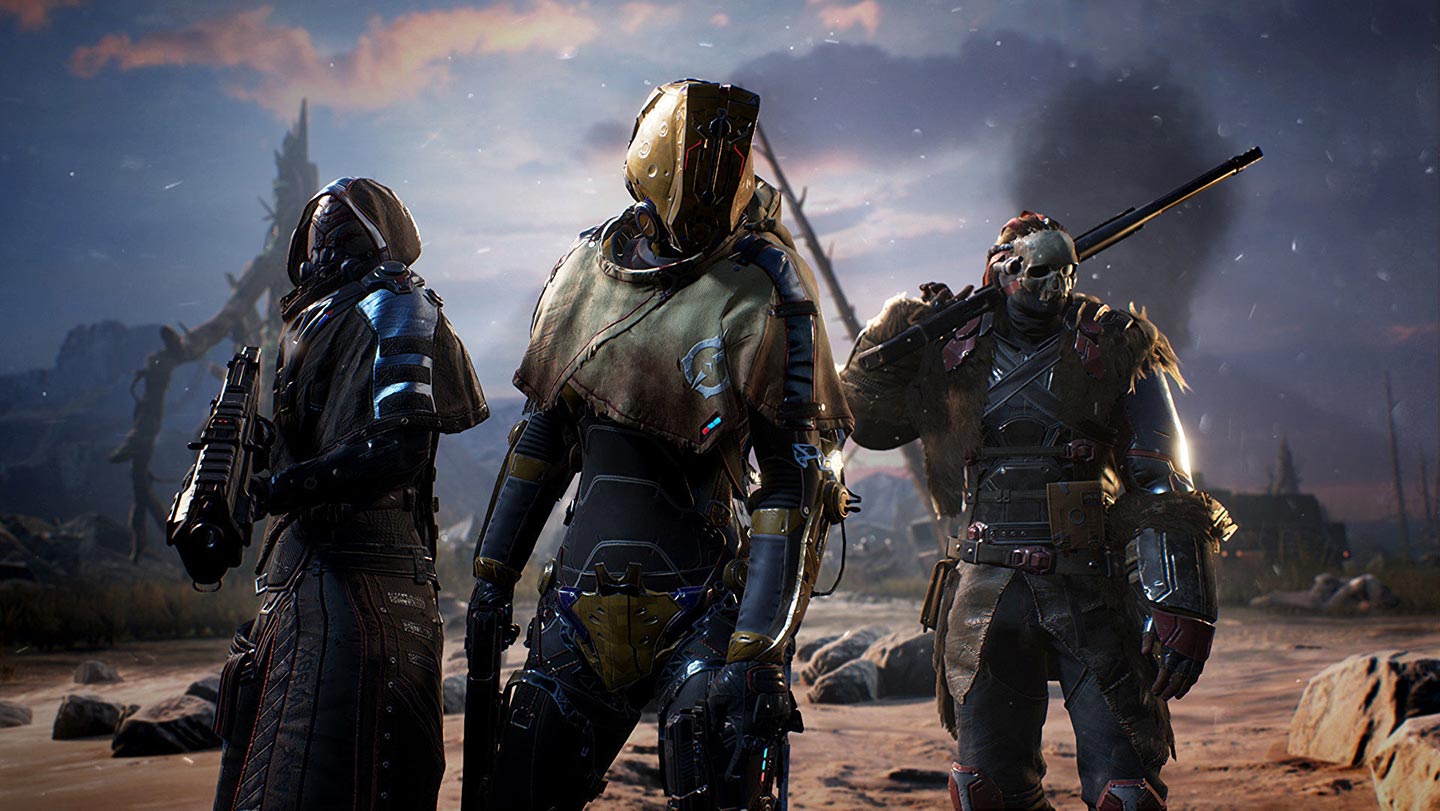 When the demo of Outrides came live I just had to try it out so I could share my impression of the demo with you. Do I think Outriders is the ultimate Destiny killer after playing the demo? I don’t think it is. Don’t get me wrong, we had a ton of fun nonetheless. Let’s dive right in.

UPDATE:
Square Enix posted several changes they made to the beta, based on player feedback. Some of the issues mentioned in this article have been patched or improved!
Here is a summary of the changes they made in the demo.
Full link to the patch notes here.

Resolutions that apply to ALL PLATFORMS:

Additional resolutions that apply only to PC:

Additional resolutions that apply only to Xbox Platforms:

Additional resolutions that apply only to PlayStation Platforms:

The good things in the Outriders demo.

Straight off the bat you get that Gears of War feeling. The way the character sprints, the gore and even some of the sounds. But it’s Gears of War on speed. The pace is a lot higher and less focussed on taking cover. The combat is a beautiful flood of destruction, fire and body parts flying around. Dealing damage is the key to healing yourself so you just have to keep on going in order to survive. Always pushing forward in order to stay alive. It is so good and satisfying, it keeps you engaged.

Veteran Gears of War players they will be right at home with the shotguns and rolling. You will quickly roll into an enemy to blast him into a gory mess that used to be a human being.

The waves of enemies the game sends at you are large. The AI will push you from the front with several heavies while the small grunts flank you and attack from the back. So be sure to keep an eye on your flanks and back to prevent your party from being overwhelmed. Or pick off an easy enemy to get some health.

Each class has its own abilities and they all look unique. There are some similarities, like imbuing your ammo, but the looks are all different so you can easily distinguish them.

The effects and look on your abilities are simply amazing. The particles surrounding them, the effects of an enemy freezing or burning. The trickster really stands out with his slow trap and temporal blade. You can turn destruction into art with this class.

Higher quality pieces of gear also improve certain abilities your class has, less cooldown, an extra use,… So you end up using your favorite abilities more or faster. If the right armor pieces drop.

The visuals and the world

The world you play in is marvelous. From the vibrant forest and grass plains in the tutorial, to the warzone you spend most of the demo in. They are beautiful. The armor and weapons were a bit lacking in the demo. But the trailers from end-game content do promise to fix that.

Small encounters in the city actually play out when you return. There is a point where you see 3 hounds (members of a gang in the city)  dangling a citizen near the edge of a staircase, when you later return the hounds are gone and there is a body at the bottom of the staircase. Small encounters like this make it feel like the world is alive and moving forward in time with you.

Side-quests can have lasting impacts on the world, like the Mr. Chang quests that result in a new shop opening in the city. It puts more weight to some of the side-quests.

We played across pc-ps4. After giving out my code my buddy joined me and everything went flawless. My loading times increased a bit but overall the experience was smooth and very easy to do.

The bad things of the Outriders demo.

The cutscenes are just horrible to watch, on pc they drop down to 30fps and there are stutters that totally break immersion. The camera is very shaky, like the cameraman was on his first day on the job. The first time I went through them just to keep up with what was happening. All my other characters were instant skips from me and the rest in the party.

There are some unnecessary cutscenes as well, a 10 second cutscene where a gate opens followed by a loading screen. Why isn’t the game loading during the cutscene? What is the added value? It just prolongs the time in between battles.

Often the fabric on characters would glitch out, resulting in a stuttering motion you really can’t ignore. Eg: an arm that is constantly moving because it can’t decide what position it should have, cloth in weird places or covering the character model.

I hope this was just a part of the demo and that these will run alot smoother when the game releases. An occasional glitch of some clothes or body part is funny most of the time. But the stutters and shaky camera make the whole experience unpleasant to watch.

Some of the graphics settings

When you sprint your whole screen is washed over with motion blur. You can tweak some graphical settings for the game but not nearly as much as I would like for pc. Cyberpunk lets you tune the game to perfection (wel, make it run decent) for your rig. In Outriders it’s pretty basic. Like being unable to turn off the motion blur.

Also nvidia detected DLSS was on for the game while there is no option to turn it on or off in the game. After a quick google I was able to turn it off by tweaking a GameUserSetting.ini file. You can find the instructions here and turn off the DLSS and allow you to tweak antialiasing to your own desire. And to be honest, it looks better with DLSS off, but you might need to tweak some other settings to maintain your fps.

Accessibility settings are present, and I approve that they have so many options to toggle on and off. The bigger text one barely did anything for my teammates playing on tv tough. The text was still hard to read even with the setting turned on.

Nobody I played with was invested in the story, everyone wanted to skip and get back to the juicy combat as fast as possible. We didn’t care why we were doing it, we just wanted to get back to shooting and blasting everything up.

The story takes a few leaps that has you (and your character) saying “what the fuck is this”. If you get through the bad cutscenes, there is no real bonding with the characters you encounter. The dialog options don’t have any choices in the demo. Some conversations just felt bland or a bad build up to a pun.

The protagonist has a moral compass all over the place, in the Mr. Chang sidequest he doesn’t care that Mr. Chang gets killed right in front of him. While in another side quest he is shocked when Mc. Cain murders an enemy in cold blood. So he didn’t care about Mr. Chang, who treated him with respect, was going to offer him some tea and show him the good stuff. But feels bad when Mc. Cain kills a grunt from the opposing faction in cold blood.

This is based purely on the story in the Outriders demo version and it seems a bit all over the place. The story is likely not going to change for the full release.

At a certain point I was trying on headgear and the headgear and my hair disappeared. One person in the party was unable to accept any quests all of the sudden, unable to progress unless she relogged.

Some glitches are simply funny, like the sideway slide you can do on PC.
Check out this short gif to see what I mean. We ended up sliding across the city for about 30 minutes lauging at how funny it looked. Even the name Outsliders was mentioned.

This is the Outriders demo version and I hope most of it will be ironed out in the final version of the game.

We had a good time and you probably will too. The full game releases on 01/04/21 and the Outriders demo is free to play for everyone. So be sure to check it out for yourself and decide if you think Outriders will be the ultimate Destiny killer. These impressions are all based on the Outriders demo, so alot can change when the full version releases.

Check out the Outriders page for more documentation on the game and features that will be available on release. eg: endgame and crafting. And the FAQ contains their statement about microtransaction, Games-As-A-Service and Denuvo. Their statements might suprise you.

To get the demo just visit the following pages: