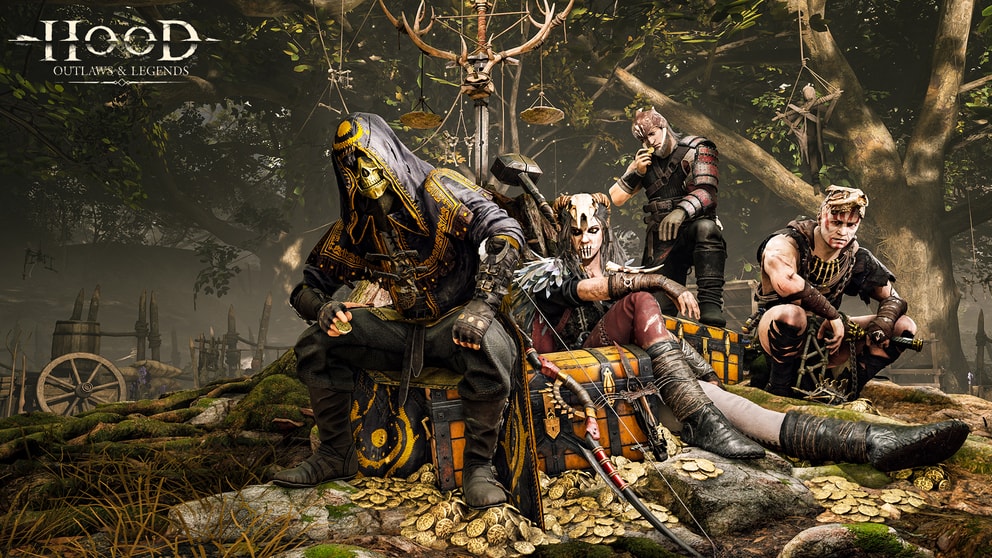 If you plan to play this game fully solo and don’t feel like interacting with strangers online this game is NOT for you. The ping system is pretty basic and can cause some confusion.

On the other hand if you have at least one friend to play with the game is a whole different experience.

There isn’t a lot of content in game, more will be unlocked in the following seasons. And without any ranked mode and no skill or level based matchmaking some matches become really one-sided.

Hood Outlaws & Legends for PC is a console port and it shows. No options to tweak settings just how you like it. A cap of sixty two frames per second and no option to turn off depth of field.

The premises of Hood Outlaws & Legends is a simple one. Yours and the enemies team are outlaws. Stealing from the state that has the country in an iron grip. So the goal, just like the Robin Hood movies, is to steal the gold and give to the people. While keeping some for yourself.

Hood Outlaws & Legends loads in and there is absolutely no sound until you load into your camp; or the tutorial if it’s the first time that you play. That silence just feels so weird that I feared my headset had broken.

When it comes to PC games I really like to dig into the settings first. Tuning them to what I think will be optimal. But Hood Outlaws & Legends doesn’t have a main menu. Straight to camp, every time you boot up the game. The plus side is that when you change any settings you see the effect immediately when you close the menu. Still the settings really lack the options that you want as a PC gamer. No depth of field, custom fps settings or fine tuning shadow options.

So it turns out the PC version of Hood Outlaws & Legends is a console port, capped at sixty two fps. Most developers have learned that we, PC gamers, like our ports with a little bit of extra love and settings to play around with. I wish this heist game had stolen some ideas from other console to pc ported games and implemented them to the people.

The heist and Outlaws

Currently there are 5 maps in rotation with more on the way later this year, four Outlaws to choose from and no restriction on how your team is filled. The heist game mode is the only one available but the road map promises more later on.

Matchmaking is a mess, it’s not skill-based and can pit you against fully loaded veterans that leave your team with no chance. While you are matchmaking you are stuck in the lobby with no option to change your loadout or looks. Just waiting, saying hello to everyone who joins in the hope that they want to communicate.

Every match has four stages, these stages are shared so both teams are always going for the same goal. No matter how fast your team is going, the other team could be one corner away. Turning a sneaky insurgency into a bloody battle between Outlaws.

The first stage is stealing the key to the vault. The sheriff has the key and roams around the map, you cannot kill the sheriff, only incapacitate him for a while. On top of that he takes a huge beating before going down, drawing a lot of attention to the ruckus. And he assassinates players in one hit.
He’s easy to pick out, a huge walking mountain of metal with loud footsteps and a deep voice. Sneak to his back and steal the key or have someone distract him and then steal the key.

The second stage is finding and opening the Vault door. The player that is carrying the key gets an estimated location of where the vault is. Such as the building and floor level. If you are all communicating, finding the vault is easy. But if the player that has the key isn’t sharing that information you are basically running blind. Once one player in the team finds the door it is marked for everyone. Even if your team does not possess the key, it will be marked, this opens up the possibility to ambush the other team.

Stage three is carrying the big treasure chest from the vault to one of the extraction points. Choosing the extraction point is probably the biggest tactical decision your team makes. I had an enemy team extract near our spawn and we took that win. The map has three extra respawn points beside the main spawn. These become vital in the fourth stage. If you can control where the enemy team spawns, the chances of victory increase vastly.

Put your backs into it

The fourth stage is winching the chest aboard a cart or boat waiting for your return. One to two characters can winch using stamina to make the process go faster. The winching track has several milestones that reward the team that winches past them. But the team that gets the last milestone wins. Some matches left me very salty, especially when my team got the key vault and all the milestones. To then lose the match is just annoying.

Of course your team can forgo stealth and rush in. When you alert the state certain regions on the map go into lock-down or high alert. The guards become more perceptive and patrol routes are different. Get ready to bash some skulls when you do.

The combat and assassinations can be brutal, bones cracking, heads getting smashed, point blank bow kills and so forth. All combat actions cost stamina, the key to survival is managing your stamina. Some skill is required but once you learn the animations of your enemies and own character you become a death machine. It’s fun but can be quite a mess sometimes. I had a lot of fun with the huntress, sneaking into the brawls and assassinating enemy players mid battle. Very satisfactory.

All four currently available Outlaws for this Hood Outlaws & Legends review, one more character has been teased on the roadmap.

John is the tank, Took is the healer, Huntress is the rogue and Robin the ranger. Yes the game is based on the Robin Hood legend and the character Robin is the actual Robin Hood. Hence why he is so popular I guess.

Each character has its own starter perks and unlockable perks. This creates some options to fine-tune a character to your own liking, playstyle wise.

Everything except Hideout is leveled by playing matches. Hideout can be leveled by giving more gold to the people after every heist. At the end of every heist you get the option to divide your earnings amongst yourself and the people. Every so much gold your Hideout level will increase.

But everything you unlock, aside from perks, is purely cosmetic. I get that this is in favor of balance and your look becomes a trophy. But personally I don’t care for cosmetics, I’m not going to grind twenty hours for a blue and gold tunic.

And your Hideout levels only unlock more cosmetics. No visual changes of the Hideout or cosmetics for the camp, only clothes and weapons. What I loved in The Division and The Division 2 is that your hard earned resources and time became a visual representation in your Base Of Operations. It felt like what you did had an impact on the world.

Even though Hood Outlaws & Legends is a console port it looks good. The environments look genuine and authentic, forests feel like forests, the muddy roads in the villages feel dirty and used. Add in amazing lighting placement and the deep orange of the fires and it creates some visually beautiful scenes and locations.

As I mentioned earlier, the sound in combat is amazing. Sound plays a major role in this sneaky heist game. After some experience you will be able to pick out the sound of footsteps from players and locate their estimated location.

Aside from the lack of options to tinker with and the frames per second cap I have nothing bad to mention about this aspect of the game. But it isn’t enough to carry Hood Outlaws & Legends long term.

Hood Outlaws & Legends revolves around the Games As A Service concept. The base game is here but it lacks some features that should be there on arrival. Competitive mode is the main missing thing. Some skill based matchmaking with a ladder to climb would give Hood Outlaws & Legends some longevity. But right now I’ve done all the maps multiple times and I don’t feel like grinding cosmetics.

A year 1 roadmap usually means that there is a plan to keep you coming back by drip feeding content. It’s a predatory way to keep your interest and wallet in the game. Although everything you can get from the season passes is cosmetic, so no overpowered weapons or characters.

The roadmap mentions a new character and major gameplay additions. In my opinion that’s really vague and doesn’t create a sense of hype or positive feeling for the future of Hood Outlaws & Legends.

And if you plan to play this game completely alone, steer away.

For more reviews, check out our review section here.