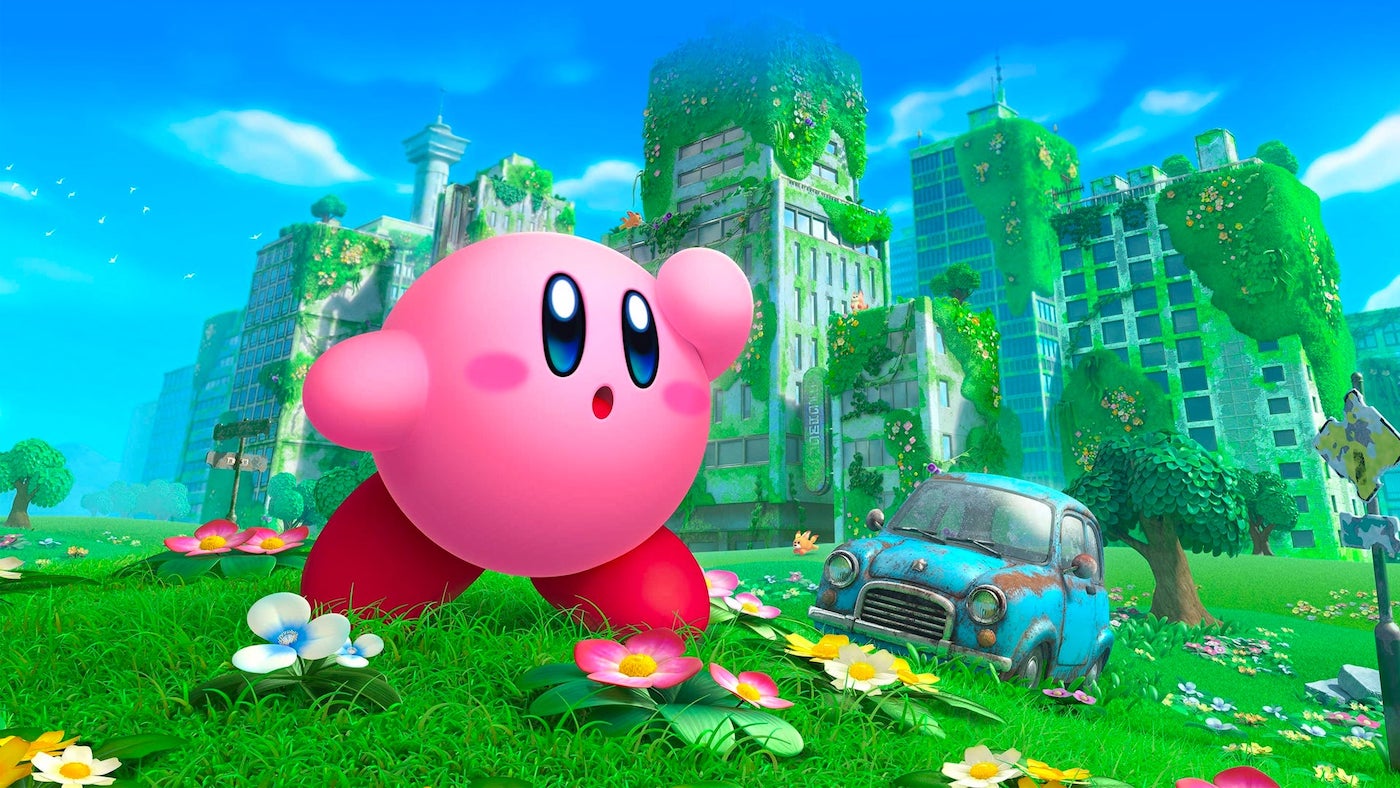 Kirby and the Forgotten Land is the newest Kirby video game that landed on the Nintendo Switch on March 25th. It’s an all new 3D platform adventure game starring our favorite pink omnivore. It is the first main title of the series that’s fully in 3D: really the start of a new era for the Kirby franchise. And a flying start at that with very positive reviews from most critics. Whether you’re already in love with Kirby or are looking for a new adventure game from Nintendo, keep reading to find out what this one is all about and why it’s a must-have in your Nintendo Switch collection.

TLDR;
Kirby and the Forgotten Land is a really good and creative 3D platform game, fully using the capabilities of the Nintendo Switch. I recommend playing the free demo if you’re still unsure.

Kirby and the Forgotten Land: Setting

Let’s explore the universe and characters that define this video game first. I’ll briefly introduce our pink hero and give some more insights into this long running series of platform games. Then we’ll touch upon the story, graphics and sound design of Kirby and the Forgotten Land.

The world first met Kirby in 1992 in Kirby’s Dream Land, developed by HAL Laboratory for the Game Boy. Kirby is a young, tiny, round pink creature who lives on the distant star-shaped planet Popstar. He resides in a land called Dream Land, where everyone lives a mostly carefree life. That is until someone threatens that peace, then it’s up to Kirby to put on his brave shoes and save his home. Cuteness isn’t his only feat, he also possesses incredible abilities. He can inhale objects and enemies alike. He’ll either spit them out forcefully or ingest them to copy their abilities. Kirby has the power to transform into new forms, which got a new creative approach in Kirby and the Forgotten Land.

All main Kirby titles up until now have been side-scrolling action platform games. Kirby runs and jumps, and is even able to inflate himself with air to fly for a little bit. He of course also attacks foes and bosses, but another main focus is puzzle solving. Most areas contain secrets to discover, often in the form of environmental puzzles to discover secret passages. Kirby is the hero of 17 main titles in the series, however there are dozens of spin-offs available as well.

In Kirby and the Forgotten Land, our pink hero is chilling in Dream Land as per usual. Until a huge dark vortex appears and sucks in everything in its path. The vortex sends everything, including Kirby, to a post-apocalyptic place called the New World. Which is pretty dark given how cute the game looks, if you ask me. We discover that the Waddle Dees have been kidnapped by the Beast Pack. Elfilin, a creature who looks a bit like a chinchilla, helped the Waddle Dees settle into the New World and build Waddle Dee Town. Elfilin also gets captured by the Beast Pack, but Kirby saves him. He explains that they tried to fight back and asks Kirby to help free all the Waddle Dees.

Kirby and Elfilin travel the New World together, exploring new levels all while trying to save as many Waddle Dees as possible. As you save more and more Waddle Dees, you restore Waddle Dee Town bit by bit. This town serves as a base where you can rest, upgrade your abilities and much more. You need to rescue a certain amount of Waddle Dees before you can continue to the next level. But why is the Beast Pack kidnapping the Waddle Dees? And will Kirby ever make it back to planet Popstar? I’m letting you discover that for yourself.

Although Kirby and the Forgotten Land is the first 3D main title of the series, the visual department really left no room for error. The game looks incredible and is once again showing off the capabilities of the Nintendo Switch as a console. What stands out the most is the art design of every level, especially the entry of every stage. It is always shot from a specific camera angle to really let you take in the atmosphere. The amount of detail is always just right, not too much to distract you or make you think a secret could be hidden, and always enough to make you feel immersed in each specific level.

Kirby doesn’t talk and as such this game is, for the most part at least, not voiced. But unlike Pokémon Legends: Arceus, the game doesn’t feel unnecessarily silent during dialogue. Not that there is a whole lot of dialogue to begin with. It makes up for the lack of voice-acting with an incredible and extensive soundtrack. It adapts to every setting and represents the sentiment of every stage. The sound of abilities, items and enemies and such is pretty similar to other Kirby titles and simply serves its purpose in guiding you through the stage.

Kirby and the Forgotten Land: Gameplay

The main Kirby games are always platform games, but now Nintendo has applied the 3D approach to it allowing some more freedom, e.g. in the camera control and where they can hide secret passageways. The basics are true here as well: you enter a stage and have to make your way to the exit. You pick up items and fight enemies along the way. To make it through you regularly have to solve puzzles. If you pay close attention, you can spot “secrets”, which will grant you more items and in this case, more Waddle Dees to rescue. A second player can join in local co-op, who plays as Bandana Waddle Dee, using a spear as his main form of attack. Since that covers the basics, let’s dive into everything else.

The game’s teaser trailer immediately sparked memes thanks to the new Mouthful Mode. Kirby has always had a good appetite, but now he even inhales large objects such as cars and vending machines. This new mode takes center stage in some of the stages – such as having to race with, as I like to call him, Carby. There’s a completely dark stage where Kirby swallows a light bulb and lights it to navigate through it. When Kirby swallows a big hoop he can shoot puffs of air at enemies or objects such as windmills. The possibilities with the new Mouthful Mode really are endless and do not fail to surprise you. Can’t reach the next floor? Simply swallow a whole ass staircase and move it closer. The only limit is your own imagination.

The main objective in Kirby and the Forgotten Land is to find the Waddle Dees that are hidden in every stage. At the start of every stage you get an overview of how many Waddle Dees can be found, but what you have to do to actually find them remains a secret. The easiest is clearing the stage – which always grants you some Waddle Dees. Four Waddle Dees are hidden throughout the stage, some will be more obvious to spot than others. You’ll often have to go out of your way to find hidden puzzles or passageways to rescue these little buggers.

Then there are the hidden objectives. You simply have to pay attention to your surroundings while navigating through the stage and you will spot most of these on your first try. One example is taking down Wanted posters. In other levels I’ve found little ducklings, who I had to guide back to their mother. Sometimes it’s as simple as finding snacks on benches or behind tables and eating them. If you haven’t found all the hidden objectives, one will be revealed after clearing the stage. I’ve found it’s not necessary to find every single Waddle Dee in every stage to be able to progress the game, but if there’s a completionist hiding inside you, you’ll want to retry most stages at least once.

Each level contains challenges called Treasure Roads. You can find some of them by flying around that level’s map and hitting “search” when it pops up. Others you will unlock as you progress through that level’s stages. The Treasure Roads are time challenges, each focused on a specific skill. These can be regular abilities, upgraded abilities or even Mouthful Mode challenges. Depending on the difficulty, you will receive special stars that are needed to upgrade Kirby’s abilities. I found these challenges to be, big surprise, challenging. I had to retry a lot of them to make it within the set time goal. For the completionists – the game sets even more difficult challenges for a higher reward, if you have the patience and skill. I do not.

The rescued Waddle Dees work hard to rebuild their beloved Waddle Dee Town. This place is a fun hangout to go back to if you want a break. The town offers a place to rest, a shop to upgrade Kirby’s abilities, and as you progress through the game, a whole lot more to discover. The Weapons Shop is especially important, because you’ll find Blueprints hidden in some stages that will allow a certain skill to be upgraded. It will cost you some stars, but I’ve never found myself short on funds to be able to afford an upgrade. You can also test every ability in the Weapon Shop, and the owner even gives you some very helpful advice.

Waddle Dee Town is also home to a professor, who will tell you random stats such as how many Waddle Dees have been saved so far by players around the world. There are also minigames to be played, the first you unlock is the Waddle Dee Cafe, where you help serve up lunch. It also dubs as a shop where you can actually buy a food item to take with you into the next stage. Another interesting location is the Colosseum, an amphitheater where you can enter a cup to compete against several bosses. There’s still a lot more to discover in this little town that I will not yet spoil for you. It’s a very welcome and particularly fun addition to this platform game.

Kirby and the Forgotten Land: Conclusion

Kirby and the Forgotten Land is labeled as “Ages 10 and up” because of some video game violence going on. The game is easy enough for a ten your old to clear on their own and offers a more difficult mode from the beginning, which I recommend for any even just slightly experienced gamer; teenagers and adults alike. I think even younger kids could really enjoy the game, but might need some help with the puzzles from time to time. Kirby and the Forgotten Land is not a very challenging game, unless you’re aiming for 100% completion. But not every video game has to torture you like Elden Ring does. Kirby is cute and fun. The puzzles and level design are creative and rewarding. The new Mouthful Mode is both ridiculous and genius.

If you’re looking for the video game equivalent of a feel-good movie, Kirby and the Forgotten Land can tick every box for you. The only reason I’m not rating it a 10/10 is because the automatic camera angle, especially when playing local co-op, is far from optimized.
Major thanks to CD Media for the review key.