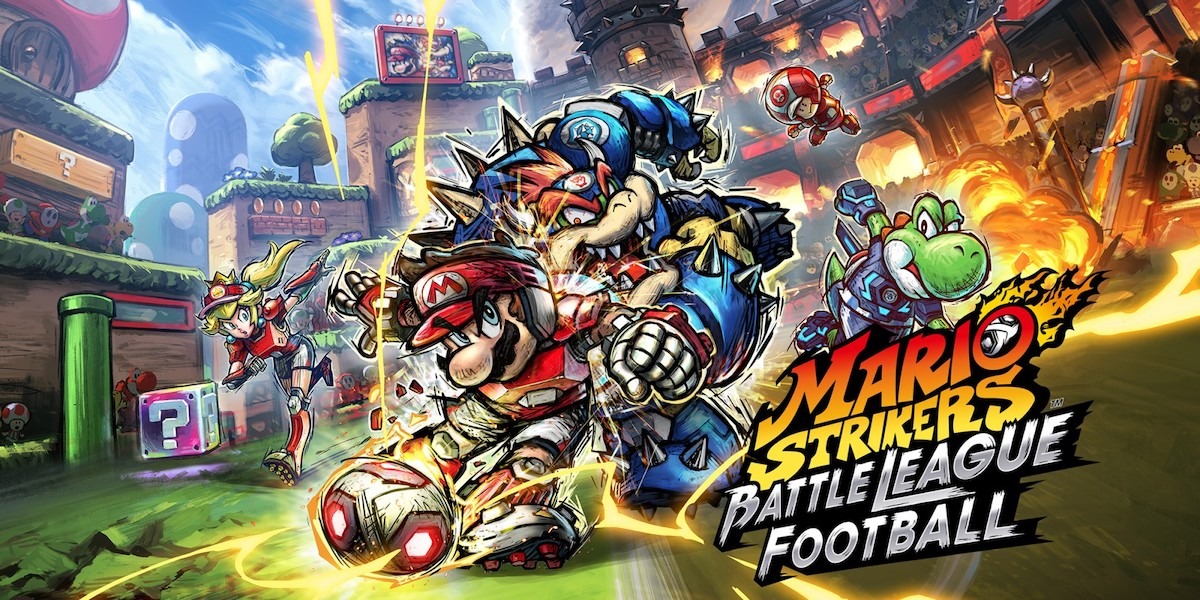 Mario Strikers: Battle League Football is the third installment in the Mario Strikers series. It launched for the Nintendo Switch on June 10th. The premise of the game? Something in between soccer and football, but forget all the rules and add some good old Mario chaos. The core gameplay is easy to learn, but hard to master. Read on if you want to learn more about this game before adding it to your collection.

Mario Strikers is what’s called an “association football game”, taking place in the Mushroom Kingdom. The name of the games sometimes contains “Football” or “Soccer” depending on the region, in case Mario Strikers sounds unfamiliar to you. Next Level Games has developed every game in the series.

The first game, Super Mario Strikers, launched in 2005 for the GameCube. The core gameplay from back then still applies to the new game (more on that later on!). The same can be said about the reviews. Reviewers praised the gameplay, but criticised the lack of single player content. Mario Strikers has always focused more on the multiplayer aspect.

Mario Strikers Charged made it to the Nintendo Wii in 2007, relatively shortly after the first game. It was the first Wii game to support online gameplay via Wi-Fi connection outside of Japan.

As mentioned before, the gameplay across all Mario Strikers titles has stayed the same. But what can we expect from “association football”? And how do the Mario-esque game elements tie in here?

Today I learned “association football” is just the general term for the sport that we all know so well, but has different names across regions. Whereas there are usually two teams of 11 players trying to get the ball in the goal on the other side of the field, in Mario Strikers you play 5v5. You choose four players from the Mushroom Kingdom, and Boom Boom is automatically added as your goalie. There are currently 10 characters to choose from, each with different stats and a unique hyper strike.

The characters that are available right now are Mario, Peach, Luigi, Toad, Bowser, Rosalina, Yoshi, Donkey Kong, Wario and Waluigi. Yoshi and Toad are the only characters that can be added multiple times to the same team. It’s not improbable that Nintendo might add more characters as part of a free update in the future.. Every character has different stats for strength, speed, shooting, passing and technique. Some are therefore more fit to attack or defend. High strength e.g. means the character can tackle others, but can’t easily be tackled themselves. A character with a high technique will be easier to play with, as the window to hit a perfect shot becomes wider.

You can’t change stats through training, but you can buy and equip gear to modify the stats on your favorite characters. Do note that every piece of equipment comes with both a positive and negative modifier. This gear can be bought with coins that you earn by playing matches. While composing your team you can choose to play with or without your gear.

You will take control of one character, and can switch to a random other character either automatically or manually. Take the ball to the opponent’s side of the field and shoot. You automatically aim at the goal, but if you charge your shot and adjust the aim you’ll have a higher chance at scoring. When you have the ball, you can also pass it to a teammate either directly or via a lob pass (in the air, which is more difficult to intercept). From time to time special orbs will drop on the field, if your team is the first to pick it up you become charged. If you then take the ball and fully charge your shot, you get to make a Hyper Strike. Hyper Strikes are worth two points, meaning they can completely switch up the game.

If you’re defending you get to tackle your opponent to try and gain control of the ball. Charging your tackles will have a higher impact and really smack the other player to the ground. And if you tackle the opponent against the side, they get electrocuted. Sportsmanship who? But tackles can be dodged! Although it’s a bit more difficult to achieve. Together with chaining passes and reaching perfect shots and tackles. To master this game fully you’ll spend quite some time in training mode. But if you’re looking to just have some fun, there’s no need to spend hours mastering the perfectly timed “first-time shot”. That’s a technique where you pass the ball to another player, who starts shooting before even receiving the ball!

What makes this game so good? That Mario layer sprinkled on top of the very solid core gameplay. There are of course the well known characters, but also the stadium should be familiar. Each team gets to choose what their half of the stadium looks like. There are currently five themes included: Lava Castle, Spooky Mansion, Jungle Retreat, Mushroom Hill and Royal Castle.

As if the senseless tackling doesn’t add enough chaos to what’s basically a soccer game, good old trusty items drop on the field. These items are the same ones as we know from Mario Kart: banana peel, red/green shell, star, mushroom and the bob-omb. They also work in exactly the same way. Imagine chasing someone to get the ball, but instead you get red shelled face first on the ground. Only to get back up and be tackled into the side of the arena, adding a nice zippy zap to your already unlucky encounter. Welcome to Mario Strikers.

What brings me the most joy, are the brilliant cut-scenes whenever someone either wins or loses a point. The same goes for the scene that plays when a character makes a Hyper Strike. The art style here, combined with a sense of humor, make this game truly unique. I’ve played plenty of sports games, but this is the only one where I actually watch the replays and laugh my ass off.

Now you know what this game is all about, let’s take a closer look at the different ways you can engage in “soccer” matches.

As the name implies, quick battle lets you play a… quick battle. You get to choose between “Single Console”, “Local Wireless” or “Online Play”. In Single Console mode you can play either solo or with up to eight players locally on the same Nintendo Switch. The Local Wireless lets you play against someone who also owns the game and brought their console around. Here max. two players can play on each console. Online Play works similarly, letting two players per console play against others online. But for this mode you need an active internet connection and Nintendo Switch Online Membership.

You set the game length at either 3, 4, 5 or 10 minutes. Although I wouldn’t call a 10 minute match “quick” any more, personally. The CPU Skill can be set to either easy, normal or hard. You can also choose to enable or disable items during your match, and the same goes for Hyper Strikes. Lastly, you can choose whether you want to play during the day or night. All that’s left is to choose a team, uniform and stadium. It’s good to note that rewards for online matches are higher than for local matches. The reward is a fixed amount of coins depending on win or loss, that you can spend on gear.

The Cup Battles in Mario Strikers: Battle League Football are local play only. One to four players compete against CPU in double-elimination tournaments (cups). This means you stay in the tournament until you either lose twice, or win the cup. If the finals are won by the team from the lower bracket, a second final is needed. Because the team from the higher bracket will only have 1 loss at that time. After losing twice, you get eliminated from the tournament, but you can pay 100 coins to play a revenge match. You can request several revenge matches in one tournament, but its cost will increase. Currently there are 6 Cup Battles available: Cannon Cup (focus on shooting), Chain Cup (focus on passing), Turbo Cup (focus on speed), Muscle Cup (focus on strength), Trick Cup (focus on technique) and Championship Cup. You unlock the latter after completing the others.

The default difficulty for Cup Battles is “normal”. Once you complete all cups, you unlock “Galactic Mode”, which means more difficult cups with higher rewards. Speaking of rewards; winning a cup nets you 400 coins the first time, and 50 coins every time after that. The Championship Cup has a higher first time reward of 1000 coins. You’ll also unlock a new set of gear. If you manage to complete every Cup on Galactic Mode, you’ll receive another 1000 coins.

Mario Strikers: Battle League Football allows you to join an online club and participate in seasons, which feels quite similar to how association football is played in the real world. You can join an existing club or create your own. What’s interesting is that you get to choose a club policy, with options ranging from how serious your play is, what gear everyone should wear or which language is used in voice chat. The club owner can customize the uniforms, upgrade the stadium and allow or reject new members. A club can have a maximum of 20 members. If the owner of a club with only 1 member resigns, that club is deleted.

An unranked soccer match against members from other clubs. It doesn’t affect your rank for the active season, while you still earn rewards for participating. It’s great for casual players who want to farm tokens and coins, since Strikers Club offers the highest rewards. Tokens can only be used and earned in Strikers Club and are used to upgrade the stadium. The settings of an open match are fixed, contrary to quick battles. You participate by joining or creating a room. If members of your club are already in a room, you can join them and earn the same rewards.

If you want to create your own club, I’m sad to say you’re too late to participate in the current season. A club needs to be created before the season starts, but worry not, seasons don’t last more than a couple weeks. Each season your club joins a division, which contains five teams. Winning a season match earns your club 6 points, a loss 1 and a tie only 2. Your total at the end of the season will determine whether you go to a higher or lower division in the next season. Each match in a season will be played with the same settings.

Mario Strikers: Battle League Football flew under the radar for me. It didn’t grab my attention when Nintendo announced it. But boy, am I glad I got to play this game. Although it’s a sports game on the surface, it’s a Mario game at its core. It’s absolute madness on the field, but if you care about mastering the technique you can dominate both local and online games. For that reason I like to compare it to Mario Kart. Easy to pick up, a lot of fun alone or with others, and very rewarding if you spend some more time honing your skills.