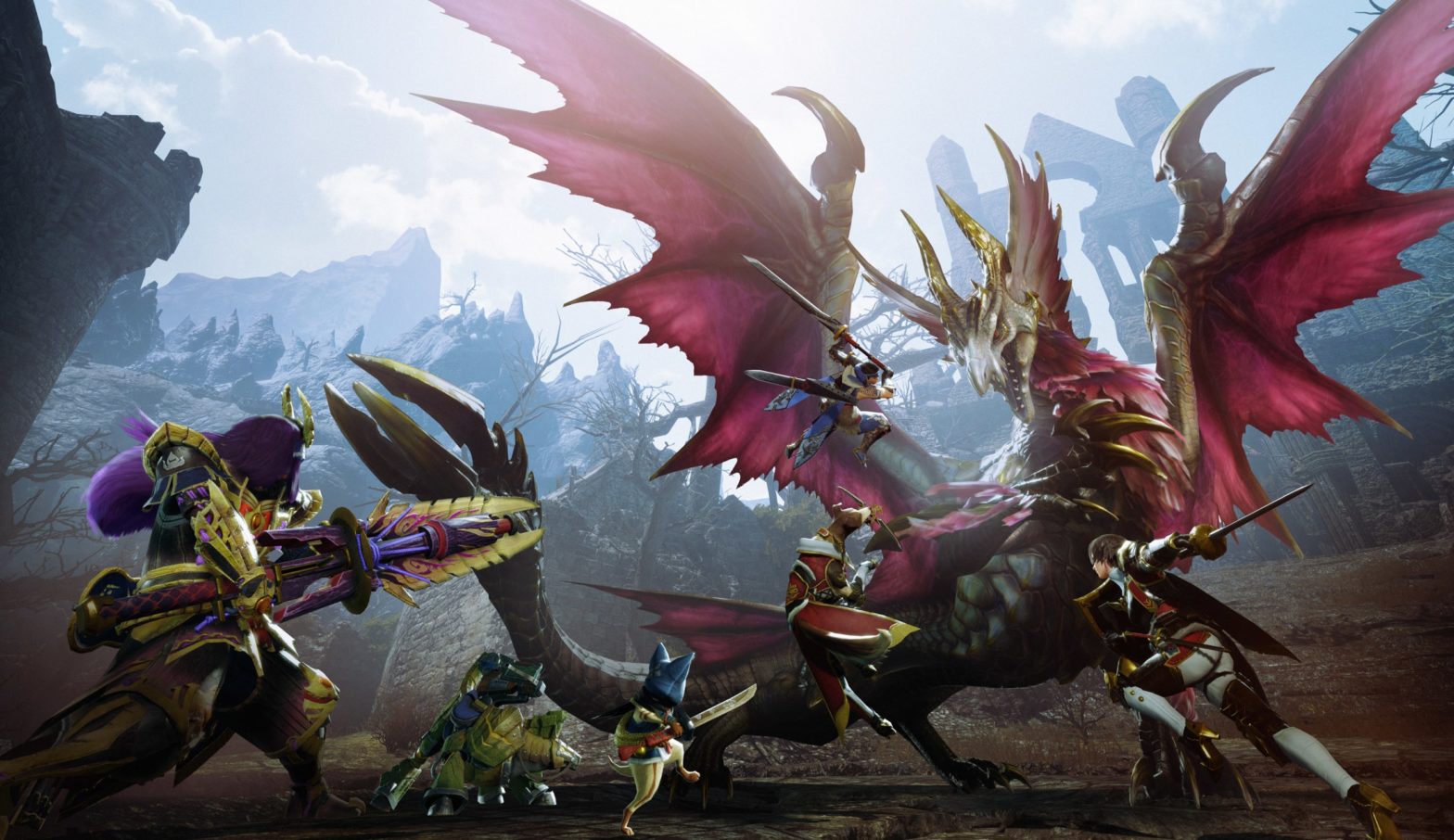 If you are reading this I will assume that, not only are you familiar with the Monster Hunter games, but also that you’ve probably been tortured by them before. If not then I will give you one warning. You press the X button on your browser tab, close this article and go back to playing the next AAA Assassins Creed game while your social relationships remain intact. You keep on reading? I will make you interested in this Monster Hunter new expansion, tempt you to play it, and show you how deep this rabbit hole truly goes.

But before that, let me sum it up for those with little time on their hands.

The idea “If it ain’t broke, don’t fix it” would characterise Sunbreak perfectly. Does that mean that Capcom stayed complacent? Fortunately, they didn’t. They improved upon the base game with the fury of a thousand underpaid, exhausted, but passionate Japanese employees. The changes here are not just superficial. The new expansion offers a ton of quality of life improvements as seen in previous installations of the series, that make the overall experience more optimized. Capcom had one foot in the door already with this new aggressive, reactive, and extremely mobile play-style that MH Rise provided but this expansion…oh boy. They got the foot out, took a running start, and charged the room with no self-restraint at all. The Monsters hit harder, faster, and can operate in more complicated patterns. You are also improved by having the ability to choose from a selection of new Switch Skills. These will redefine the way you play each weapon and test your Hunting mantle to exhaustion. If you are a veteran from MH Rise and methamphetamine-infused High-rank Monsters weren’t enough for you then welcome to Sunbreak.

The story picks up from the end of MH Rise. If you want to have a complete idea about the main game then check out Stijn Ginneberge’s Monster Hunter Rise amazing review so you feel caught up. When you go back to the village, Rondine the Trader informs you that for some reason, monsters that have been endemic to the Kingdom are invading neighboring areas. Kamura village included. Her sister, Dame Fiorayne, being a Knight of the Royal Order has assembled a “research team” to deal with the threat. The quotations are there because the only research this team will be doing is beating up every monster they can get their hands on. So, you being extremely interested in their research method, join up to find the reason why the monsters are so agitated and investigate the probable existence of an Elder Dragon. To do that you follow her to the fresh new outpost Elgado and begin your adventure.

All images are taken with the in-game camera or from the game’s Monster Hunter Rise: Sunbreak steam page.

In the outpost Elgado, you will meet a whole new series of NPC’s that will act like their counterparts in Kamura village. They will provide all the services you need and are all connected in one convenient HUB with no loading screens separating them. This is a vast improvement compared to the base game. As in Kamura village, running around so many areas for your needs was becoming bothersome after a while. The NPC’s are all colorful and environmentally pleasing, but lack any sort of substance. Which, although sounds bad, is a typical thing for MH games. The veterans know, and the new will realise fast, that story in the MH games is a backdrop to the actual mechanics and gameplay experience. So let’s dive right in.

The visuals of the expansion are pretty much in line with those from the same game. That doesn’t mean though that Capcom didn’t add new and updated locations/environments from the previous games. Famous and beloved locales, like the Jungle, return next to some pretty interesting new areas like the Citadel. An even more interesting area is coming with the next update in August this year. I’m looking at you Forlorn Arena. Other than the new environments and new monster there are no new graphical updates to the game unfortunately.

For starters, the most important information that you need to have is that you are no longer playing in High Rank. With the release of Sunbreak, the gates of hell have been opened. Years ago, by using the power of some unholy ritual, Kaname Fujioka, the creator and director of the series acquired forbidden knowledge that should never have seen the light of day. Using this information, he created something so twisted and maddening that it makes eldritch abominations blush. He created Great Rank.

Now I know that may sound a bit over-dramatized. But, I’m 99% sure that this is how it went down so bear with me. Monsters in G Rank do not care about concepts such as pain, tiredness, or fairness. They hit harder, faster, and have a compulsive obsession to pulverise every atom of your living being. Their combos, which you probably got familiar with in High Rank, become more frantic and complicated. Giving you a fresh feeling of something close to learning how to walk again, only the floor is on fire and covered with pieces of broken glass. G Rank is universally know as the casual filter among monster hunter players because the difficulty spikes hard, forcing all those people that still want to have intact social relationships to stop playing.

If you played the main game then you should be quite familiar with Switch Skills. If you didn’t, then Switch Skills are interchangeable combos or weapon-specific mechanics that provide variation in MH Rise. Unfortunately for the main game, some of them far outperformed their counterpart so they were essentially unused in high-level play. But thankfully, Capcom found a very clever solution to this problem and integrated it into Sunbreak. Switch Skills are now able to be saved in 2 distinct load-outs that can be changed during combat. This provides adaptability, flexibility, and a better way to smash the head of a fire-breathing T-Rex with your metal bagpipes. No longer do you have to go back to your resupply tent every time for last-minute changes. The future is here people…welcome to the thunder dome!

Now don’t get me wrong, the +4’s never left the games. But they are mostly added when the end-game expansions, like Sunbreak, are released. Using these deco’s, you will be able to create insane combinations to fit your every twisted and perverse build ideas. You will have to grind for them, unfortunately, as they require a lot of different monster materials. You will almost certainly need more than one copy of each +4 Decoration for optimal set building.

The Rampage Decorations are completely new to Sunbreak. These can also be crafted at the smithy for a hefty amount of monster parts and resourcses. As of now, the only place available for them to be socketed are weapons that have a specific rampage socket of varying levels. You likely realised from the aforementioned that the Rampage deco’s also have levels. Just like the normal ones, but instead of the usual abilities they exclusively provide Rampage skills. This can modify your play style, or just give you a flat boost of damage against monsters of a specific type.

Follower missions are introduced in Sunbreak and are named Follower Collab Quests. In this expansion, specific NPC’s will give you quests that you have to complete in single-player only. These unlock the quest giver as an assisting hunter with their own abilities, stats, and Weapons in Support Surveys. That character can then also be customised. They have specific weapon choices that are interchangeable and assist you during the hunts.

The A.I. and their dedication to the cause.

Now for the big question! Is their A.I. bearable or will you get a brain hematoma just trying to play the game with them? Yeah it is. It’s surprisingly good. Not only do they support you during the fight but also try to create more opening for you to do damage and save you when you are in a tight spot. My experience with this comes from the Lady herself, Dame Fiorayne. During a difficult battle with an Anjanath, I notice that she stops, turns, and just runs away on her Palamute (dog). While I’m hanging on and wandering what’s going on, she returns wyvern-riding a Barroth and starts beating the shit out of the Anjanath to make it fall so we can get a window of free damage. Apparently the AI was smart enough to notice that, while we fought, in the next area there was a turf war going on. So she rushed there, got on top the stunned monster using the wirebugs and rode it here like a knight in shining armour just to make me like her even more.

Monster Hunter Rise: Sunbreak gave me exactly what I desperately needed; more monster Hunter. Just like the title suggests it is fast, brutal, and unforgiving but most importantly, insanely fun. You will unfortunately fail a lot, and I mean a LOT, of quests. But with every failure and loss of partial sanity, you will become better at this game. Just to realize that you’re playing decently with two or three weapons out of fourteen. If what you needed in your life is hunting addiction and staying at home for hours then rejoice. Your new saviour is here.

This content was graciously sponsored by Capcom when they threw a binder with the codes in the dumpster behind the studio that i was searching for food. In the steep price of 40 euros, I honestly would not recommend the buy right now, unless you’re a fanatic of the series. Sunbreak is still plagued with a lot of technical problems that I think only time will solve. Wait for a sale (they happen quite often) and buy it at your convenience witout breaking the bank. Last but not least, remember. We haven’t even seen the final Elder Dragons of the game yet so be prepared. This is gonna be fun!