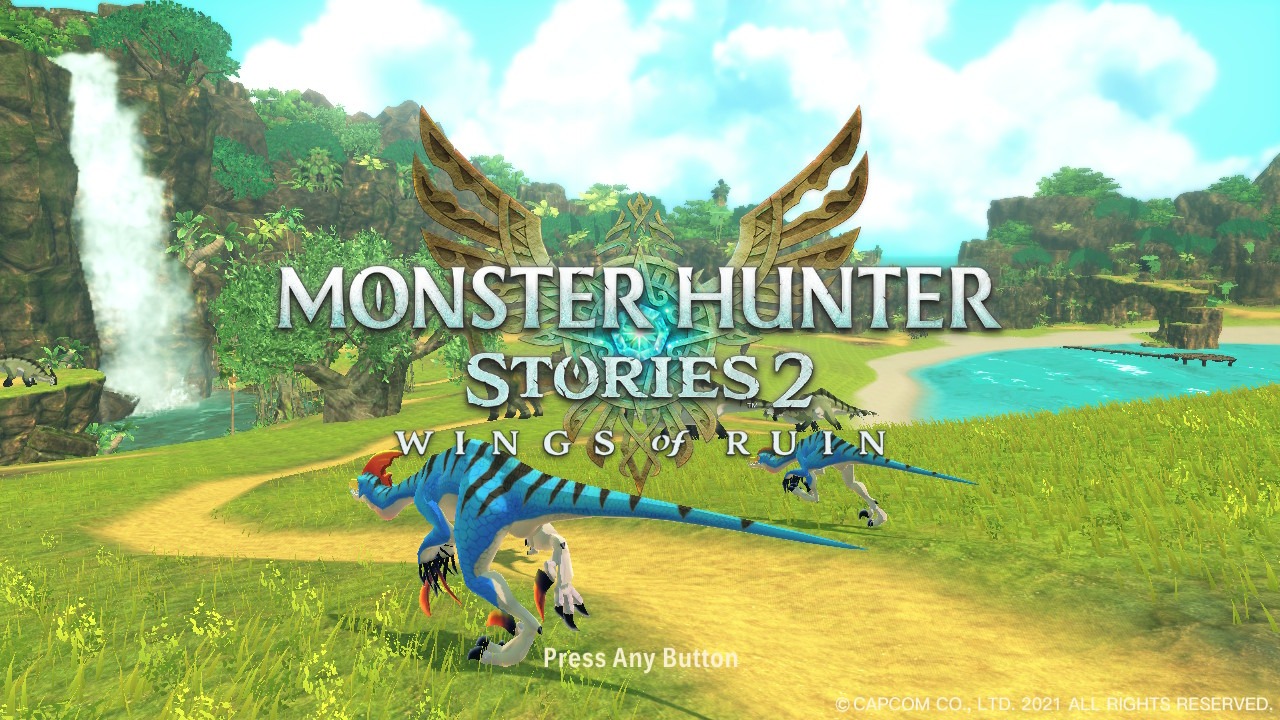 You won’t be learning weapon combos and button combinations like in Monster Hunter Rise. But you will still need your wits and intelligence to get through the fights unscathed. Let’s take apart what this game has to offer in the sections below for this Monster Hunter Stories 2 review.

Like most JRPG’s Monster Hunter Stories 2 focusses on turn-based combat, exploration and story. Each aspect takes what makes JRPG’s so enjoyable and adds some of that Monster Hunter flavour we all love.

Something that is a bother in some JRPG’s is the pacing. Monster Hunter Stories 2 starts off slow, the tutorial takes a few hours. By the time the story really starts going, you are just short of 10 hours in. It has some stretched out moments and repetitive sections that could have been improved a bit.

The story progresses gradually and introduces new characters as it goes. Each character has a connection to the main story, and they all get fleshed out enough that they feel like actual persons that lived in the world. Not just NPC’s there for progression purposes.

The story is brought to you in two ways. First we have the cutscenes and boy are they long. The cutscenes take the time to present you with flashbacks, scenes and some humour, all while progressing the story in an enjoyable way.

Secondly, we have pop-up windows at certain intervals that give a tldr of what happened in the previous part and what you are setting out to do in this part. Very convenient in case you got distracted during one of the cutscenes and missed something.

Is it one of the best stories I played in a JRPG? No, not at all, Octopath traveller still tops my list when it comes to story in JRPG’s. Monster Hunter Stories plays it safe and brings nothing really new, but it does what it does in a good way.

In total, it will take about forty to forty-five hours to complete the campaign of Monster Hunter Stories 2. All depending on how much time you took to explore, grind and side content completion.

JRPG’s and turn-based combat go hand in hand. Each JRPG tries to add their own thing to the combat to make it unique and stand out from the competition. Monster Hunter Stories 2 did just that.

Before I get ahead of myself, let me explain. Each turn, the enemies face the target they are going to attack. You can face them head-to-head and win the head-to-head if you counter their attack. How do you counter an attack? Let’s break it down.

Well, it’s pretty easy. The basic attacks work like rock-paper-scissors. You have three types of attack: power, technical, speed. Speed beats power, power beats technical, technical beats speed. This is always shown in the interface when you decide to do an attack. However, you have to learn the type of attack the enemy will do.

For every monster you encounter, you have to learn what type of attack they will do. On top of that, monsters can enrage and change their attack pattern. While weakness or resistances to certain weapons are visible when attacking after you defeated it once, there is no such thing for the attack patterns. Memorize the type of attacks or pay good attention on their first attack.

If your Monstie or you win head-to-head battles against the opponent, your Kinship gauge fills up. This gauge is used to pull off skill attacks for you and your Monstie, the biggest advantage comes when you fill up the gauge and get to ride your Monstie.

Riding your Monstie heals it for the total amount of HP you have at that time, and you get to directly control the attacks of your Monstie. Winning head-to-head fights increases your kinship level to a maximum of three, at which you can unleash the most powerful kinship attack. You are able to do this at level one, but it is considerably weaker.

Activating this skill starts a cutscene that is unique for the Monstie you are riding. Each one is quite spectacular and sometimes funny. I loved watching these and trying them out for the Monsties I was playing with. They are simply amazing and a blast to watch time and time again.

If you and your partner activate your kinship skill at the same time, it becomes a duo kinship attack with an even more impressive cutscene that combines both skills. Sadly, the background of the kinship attack doesn’t match the terrain you are currently fighting in, breaking the immersion.

Building a team of Monsties for combat is one thing, each has their own unique skills and advantages they bring to battle. On top of that, each Monstie has some exploration skills as well, so you might want to keep those in mind when making your dream team. Some examples are an ability to jump gaps, break rocks and climb vines.

The areas are filled with their own unique monsters for you to collect and farm, hidden chests and each area has its own distinct feel. The only thing that was slightly disturbing was the lack of background music, or sometimes just even sound, when exploring. It made the zones feel empty, while they are truly not.

Monster Hunter Stories 2 offers six areas to explore. While the areas look and feel different, they all feel similar, especially Monster Dens that end up being reskins with sometimes exactly the same layout.

Monsties and genetics – the depth of Monster Hunter Stories 2 builds

During my Monster Hunter Stories 2 review time, I didn’t even come close to collecting all the 81 Monsties currently in the game. And with ‘currently’ I mean they already have a roadmap ready with more free content to be added later on, including new Monsties to collect and fight.

Having a roster this big means that even after you beat the story, there are hours of gameplay left if you want to complete the Monstiedex, I mean Monstiepedia. Even more hours if you want to farm those perfect Monsties.

The true depth to Monsties comes in the form of their genes. Each Monstie you hatch has a set of random genes on them, rarer eggs have rarer genes or more powerful ones. Whenever you are raiding a Monster Den for eggs, Navirou will tell you the smell and weight of the egg to determine how strong the Monstie is. The biggest tell is when you pick them up the egg will either shine gold, rainbow or not at all.

If I’m going to go into the depths of genetics in monsties the review size would probably double. So check out this video TwoSixNine and Arekz made about Monstie Genes in Monster Hunter Stories 2.

Overall, the music is good. While the combat music gets stuck in your head, it’s not an annoying tune that will drive you to the edge of madness. The villages have their own theme and aren’t overly distracting while you ponder over armour or monstie skills and genes.

An absence of sound can create an amazing atmosphere, horror games utilize this perfectly to create a form of tension and keep you on the edge of your seat. However, for exploration, you want to make the world feel alive with either enough ambient sound or music.

The voices in our switch

The Japanese voice acting is just on point, well done and has so much life and emotion in it. They breathe life into the story and make sure that even the somewhat boring parts are at least interesting to see and follow.

There is an option to select English as spoken language, but personally, JRPG’s lose a lot of character when you play them in English. It’s completely up to you, and I’m sure Capcom chooses supreme voice actors for the English dialogue.

After the 300th attack I made with a longsword, the sound basically faded out subconsciously. Your normal attacks don’t have that much of a punch behind it. The best sound effects come from the special attacks and skills.

Most of the fights you do while grinding go at 3x speed, that includes the sound. It’s not annoying at normal speed, but it can become a bit of a chaos at the higher speeds. Good thing that the combat music reigns supreme here.

Overall, it’s in between super smooth and moments where I had stutters and pop ins. Some zones ran super smooth, while other zones had frame drops and clearly showed the slower processing power of the Nintendo Switch. The PC offers a much better experience. While the Nintendo Switch offers the portability to play Monster Hunter Stories everywhere.

Nonetheless, Monster Hunter Stories is an excellent game to play handheld during your commute or breaks at work. I spent my half hour break grinding out some Monster Dens for Monsties or exp, and it helped in the long run when I wanted to continue the story.

Surprisingly, there is no real heat build up. Curse of the Dead gods (review here) ran pretty hot handheld, and it wasn’t even open world. Furthermore, I barely noticed any difference graphically, a bit more jagged edges, but that was it. When it comes to the battery, it’s pretty taxing to run. With an upgraded switch that has the bigger battery capacity, I just got four hours and fifteen minutes of gameplay out of it.

Should you buy it? Yes, it is value for money, hands down. Considering Capcom is taking the same approach as they did with Monster Hunter Rise, you will have more content coming soon to keep you playing.

The only downside is that it takes some memorizing when it comes to monster attacks. I fear if you put this game down, it gets pretty hard to get back into it. The hidden depth the genes give also make it easy to forget how you were building a certain monster.

It’s an amazingly fun game to play if you already like the JRPG genre. Furthermore, it made me realize that a grind becomes more meaningful when there is a good story connected to it. The goal isn’t just getting stronger, it’s getting stronger for your allies and continuing the story Monster Hunter Stories 2 sets out for you.

Thank you CD Media for supplying us with a review copy of the game.