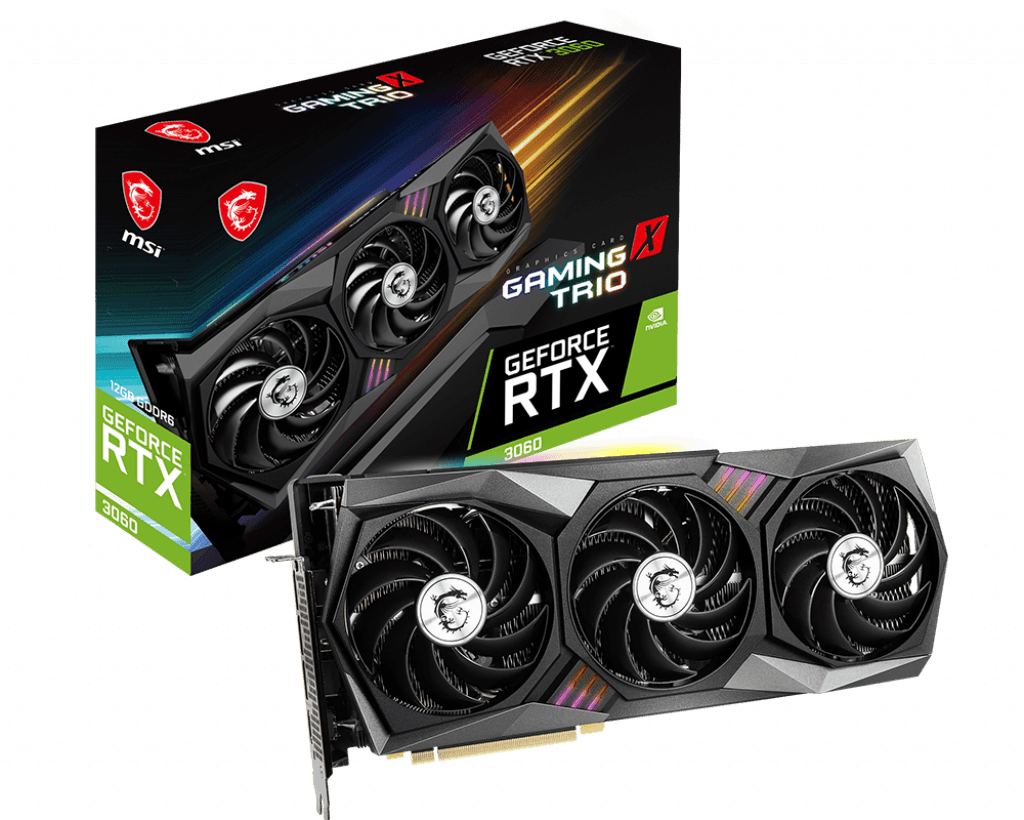 For the first time in my life, I get to write a review of a gold ingot. Well, almost… We have recently received the GeForce RTX 3060 Gaming X Trio from MSI. Taken into consideration how limited the stock on RTX graphics cards is right now, the reality is not too far from my golden bar joke.

The GeForce RTX 3060 Gaming X Trio is the successor of GTX 1060, which was a really popular mid-range graphics card. RTX 3060 comes with many upgrades like real-time ray tracing, DLSS, NVIDIA Reflex, NVIDIA Broadcast, VRAM of 12GB GDDR6, and the 360GB/sec memory bandwidth. Sounds like a 1060 on steroids. The truth is, RTX 3060 offers way more and we will analyze everything in this review.

The RTX 3060 Gaming X Trio follows the classic triple fans aggressive design (that’s where the Trio comes from) and 2.5 slot cooler. There are some beautiful and detailed RGB touch-ups on this card.

Opening the box, we have the RTX 3060 graphics card, a stability bracket, and the manuals. The stability bracket is a really nice inclusion from MSI, since this specific card is pretty large and heavy.

The first thing you notice is the cooling system: MSI’s TRI FROZR 2.0. It features a large black shroud, three cooling fans, and a triple heat-sink array. The fans here are the new Torx 4.0 fans, which feature a new design. The blades come in pairs. These pairs are bound together with an outer ring design link, which focuses airflow into the updated TRI FROZR 2 cooling system. These new fans provide more air pressure and with the Airflow Control the air-heads exactly where it needs to, for maximum cooling. The fans also use the FROZR technology. This keeps the fans still and maintains noise at a minimum until extra cooling power is needed.

What is different compared to the RTX 3080 though, is the design of the heat-sink. Three heat-sinks are visible from the side of the card and all three of them are connected by heat pipes.

It’s all about the lines

On the other side, there is an MSI logo, a long strip, and a set of accent lights around the center fan. All of them will light up with RGB lighting when you have your system turned on. Of course, the GeForce RTX logo is there, on the top edge of the card. The lighting effects can be customized using the Mystic Light software, helping you match it to the rest of your computer’s RGB. Of course, if you are not an RGB fan, you can easily disable all the lighting for less distraction.

On the backside, we have a full-cover backplate with the MSI logo and the GEFORCE RTX logos. The backplate is made out of graphene. Graphene is a lightweight composite that reinforces the length of the graphics card while providing passive thermal conduction.

On the display outputs’ side, we have three DisplayPort 1.4 and a single HDMI 2.1. You may notice that the card is pretty thick and will need more than two slots. Be extra careful when choosing a case for a build with this card.

Let’s first check the overview and the speeds of the card through GPU-Z.

Our synthetic tests started with Fire Strike. Please note that all the tests were done on stock settings.

Then, we continued on with Super Position.

And finally, the results we got from Time Spy.

For our gaming tests, we tried Assassin’s Creed Valhalla and Metro Exodus on 1080p, 1440p, and 4k. Both games were set on Ultra graphics settings.

For a freshly released game like Valhalla on 4K resolution, the MSI RTX 3060 Gaming X Trio is doing a great job holding an average of 30 to 35 FPS. Great results overall. It delivered even more than I initially expected.

Finally on 4K, and while our card is overclocked moderately, it does fall behind by a measly 2 FPS when compared to 1080 Ti, but it’s at the same levels as the RX 5700.

The power consumption for this card is quite low for its power. While the computer is idle, the card will use around 55W. After running synthetic tests for an extended period of time, it can reach up to 183W. Both numbers are really low compared to other cards of similar performance.

The temperature of the card while idle was around 41°C. After about 30 minutes of stress-testing, Time Spy managed to get the temperature up to 51°C. That’s still one of the lowest temperatures out there.

The new cooling system by MSI is doing a pretty good job. In general, while I was gaming on Ultra settings, the temperature of the card wouldn’t go above 59°C in stock clocks. While the GPU was overclocked and the fans were running at 100%, then the temperature would even drop below 49°C. Pretty neat.

The MSI 3060 Gaming X Trio, even though it has three fans, is really silent. Even during benchmarks. I think it is better to let you listen for yourselves, instead of me trying to explain:

That’s exactly how it (doesn’t) sound during a synthetic test.

If you are a fan of the GTX 2060 series and you are looking for a worthy successor, search no more. MSI RTX 3060 Gaming X Trio is your best option fοr the implementation of this specific model. Especially if your expectations are 1080p at 60FPS and 1440p at 60FPS, which is a piece of cake for this card.

One of the cheapest RTX of the market- well, at least the starting sell price was- don’t get us wrong. 12GB of GDDR6 RAM is more than great for a mid-range card.

Still, one of the biggest downsides is that it’s really hard to find a card like this on the market at the moment, but we hope this will change soon. Of course, this has also affected the price of the card, which reached 4x the starting price at some point. You can read up some more details on the global semiconductor shortage here.

At this point, we would like to thank MSI for providing the review unit we used for this review. Especially now, when finding a GPU on the market (of that level) is harder than finding your perfect match in life. If you like MSI’s products, check out our latest review for their brand new MSI Clutch GM41 Wireless mouse.