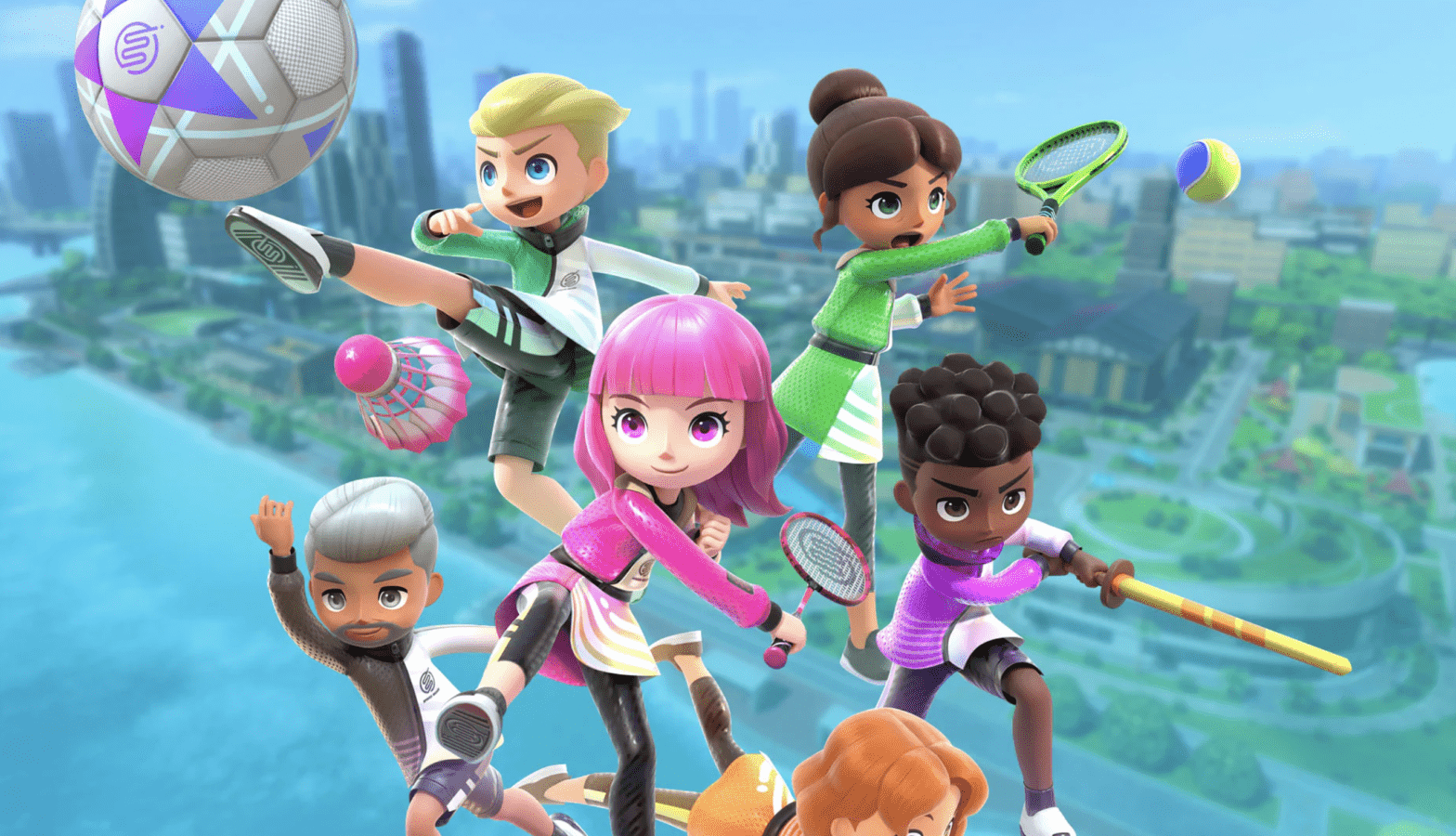 Nintendo Switch Sports is the obvious successor to Wii Sports and Wii Sports Resort. The first and third most sold Wii games to date, and for good reason! It’s a mystery we had to wait this long for a Switch version, and a blessing it’s finally here. Let’s change into our workout gear and discover if Nintendo Switch Sports is a worthy successor to the game that popularized motion controls.

Nintendo Switch Sports has an obvious agenda: for you to go online and become a pro sports player. The first game mode is “Play Globally”, the other options are “Play Locally” or “Play with Friends”. It’s interesting to see they put the global option first, especially since you need a Nintendo Switch Online membership to be able to go online in the first place. This is Nintendo making their intentions clear, although they don’t have a good reputation when it comes to online services.

The main game mode as far as I’m concerned: here one or two players go online to play against other sports players around the globe. Both players need to have a Nintendo Switch account linked though, so bringing along a casual friend with you is out of the question. There’s only a few games that you can participate in together: Volleyball, Bowling, Tennis, and Soccer. If you queue for any of the other games, only one of you gets to play. You won’t be able to join the Pro League together either. In that sense, I think this game mode is tailored for single players.

You get the option to queue for up to three games at the same time, which will reduce the time you have to wait until a match is found. It’s a nice feature, especially if you don’t really care what you wind up playing. I’ve been playing the game since its release and rarely had to wait longer than 30 seconds for a match to be found. There is the occasional communication error, which has always been resolved by going back to the main menu and then reconnecting for global play.

Where you might have lost interest after a while with Wii sports; playing against friends/siblings or the CPU, global play keeps you engaged in more than one way. Every week a new collection of items is added: accessories, stamps (similar to emotes), titles, whole outfits, and even new bodies. Yep, go get that squirrel body, tiger. The only way to unlock these items for your character is by engaging in global play and earning points. Every time you reach 100 points you get to claim one item, with an additional reward if you claim all items of that set. You’ll have three weeks’ time until that set goes out of rotation. You earn points by playing matches, with a higher reward for wins and special plays such as long rallies.

If you don’t enjoy the fashion game, then surely PvP gets you riled up. After a couple of wins in a sport, you are scouted to become a Pro. At this point you enter the Pro League for that sport, joining in at rank E, moving to D-, then D, then D+, and so on until maybe one day you’ll reach rank A. If you want to take a break, you can pause Pro play in the settings. The Pro League is a really interesting feature, as going against players of similar levels adds a great opportunity to learn more advanced plays and really hone in on the specific skills of a sport. Both the fashion and competitive rewards keep me going back to this game every week.

Local play in Nintendo Switch Sports is essentially the same as Wii Sports, you can play with or against friends locally, with the addition of CPU players when needed. It’s the most accessible play mode if you want to boot up Switch Sports as a party game or to practice specific skills, such as a perfect serve in tennis.

Another online game mode, where you can set up or join a room and even use voice chat via the Nintendo Switch Online app if you wish to do so. However, this mode is not very different from local play. You can’t use this mode to go up against other players online with your friends. You’re stuck playing against each other and CPUs. A pretty big oversight if you ask me, as now there is no way to e.g. team up with 4 friends and play a soccer game against other people online. If you want to play against others online with your friends, you’re only able to bring one person along and they have to be in the same room as you, using the global play mode.

Nintendo Switch Sports currently offers six different sports, with a nice variety of single-player and team sports. Nintendo has also already announced that we’ll receive a free update somewhere in autumn 2022 which will add a seventh sport: Golf. This is a trend we’ve seen before, like with the newest Mario Golf where they added more courses in a free update after a couple of months. They’ve also provided several free updates for Animal Crossing. There’s no promise of them adding even more sports in the future, but there’s a good chance.

Nintendo Switch Sports adds Volleyball as a totally new sport and it’s honestly my favorite one yet. In 2 vs 2 matches you want to be the first to score 5 points and take home the win. Having binge-watched Haikyuu!!! I consider myself a theoretical volleyball expert. The two-player set-up instead of six simplifies the gameplay and reduces it to its essence. When you serve, your opponent bounces the ball to their teammate, who sets the ball for the first player to spike it over the net. Your teammate stands close to the net and tries to block, and you stand in the back to bounce the ball in case it makes it over to your side.

Once you get the hang of the core gameplay, you can spice it up with quick plays. Here you spike the ball earlier than usual. You can also try guessing where your opponent will spike towards, to completely block their attack. It’s a big risk with a big return if you guess right. The more accurate your timing while receiving and setting the ball, the more powerful the attack is going to be. Receiving difficult balls, blocking fast spikes or even keeping the rally going for a while is very rewarding. Volleyball is the most fun I’ve had standing in my living room waving my arms around for sure.

In Badminton, you play 1v1 matches, where the shuttle has to go over the net but stay within bounds. It seems pretty simplistic, and it also is. Which makes it fun, but also hard. To win you need to master the details, figure out the best time to hit the shuttle, together with the right angle. Instead of just hitting the shuttle back over the net, you can perform a “drop shot”, which sends the shuttle flying just over the net. If your opponent has a hard time sending the shuttle back to you, you’ll get the opportunity for a smash. Easy to learn, difficult to master.

Bowling in Nintendo Switch Sports is the same as it was in Wii Sports. There is however a new game mode named “Survival”. The lanes here go from weird to bat shit crazy. Becoming more and more difficult to hit any pins at all. In online play, you get regular lanes until you reach ranked play. There’s always 16 players, and half of them get eliminated in the first round. You get three throws per round until the top 2 decide the winner with one last throw. On average bowling gains you more points per match than any other sport, so I recommend it if you want to farm the weekly cosmetics as quickly as possible.

In soccer, you play a 4v4 match, pink vs blue. This is the only sport that requires you to have two Joy-Cons, because you’re moving your character with the left Joy-Con and hitting the ball with the right. The goal is to kick the gigantic soccer ball to the other side of the field and score more points than the other team. The lack of proper communication is most notable in this sport. Soccer matches rely on strategy as much as they rely on the ability to kick a ball in the direction you want it to go. You can ask for the ball or pass to a player, and express happiness or disappointment with your emotes. That’s not near enough for an efficient match though. It’s fun for a little while but quickly grew frustrating for me.

In Shoot-Out mode your leg strap comes into play. Here you have to kick the ball into the goal by actually moving your leg. Nintendo has announced that a future update (Summer 2022) will enable the use of the leg strap in Soccer matches as well. A nice reminder that the Nintendo Switch is king when it comes to Motion Controls and how fun they can be.

In Chambara, you choose between three different types of swords and try to hit your opponent off the platform you’re both standing on. Falling results in a big splash in the water – and dishonor on you, your family and your cow. Whoever gets the best out of three rounds, wins. The different swords offer different plays, but the basics remain the same. Block incoming attacks and attack if you spot a window in the opponent’s defense. It’s pretty fun, but mostly a good way to let off some steam by hacking away at a total stranger. Or at my boyfriend.

My second favorite sport on Nintendo Switch Sports. Tennis is always played in doubles. If you’re not teaming up with a local player, you’ll control both the tennis player at the front and the one at the back of the court. There are also three different types of court to play on, each affecting the way the ball bounces and how far it travels. It’s a lot harder than other games in my opinion, since it’s crucial not to hit the ball out of bounds. Something that’s very hard to manage in the other games such as Volleyball and Badminton, where the ball/shuttle seems to always land just within bounds.

If you’re playing solo and go up against a duo, it can be a bit trickier. After you swing at a ball, and miss, it takes a second for your player to recover. Since you’re controlling both players at the same time, they both swing and miss. However, an actual duo doesn’t swing at the same time, so the first player can swing and miss, and the player in the back can easily pick up that ball. But duos are usually very greedy and tend to make more mistakes than solo players. I also find it very satisfying to not only beat one, but two other players by myself.

Nintendo Switch Sports offers less than its predecessor Wii Sports on surface level. There are simply fewer sports available to enjoy. But, and this is the crucial point, Nintendo Switch Sports seems to be made for online play. You never have to play against dumb-looking Mii CPUs anymore if you don’t want to. You can play against real players and feel the satisfaction of increasing your skill and defeating others. There’s something very addictive about sports, which are already competitive by nature, and adding that layer of online competition.

I think Nintendo Switch Sports is lacking in the party game aspect, and triumphing in the e-sports sports of it all.