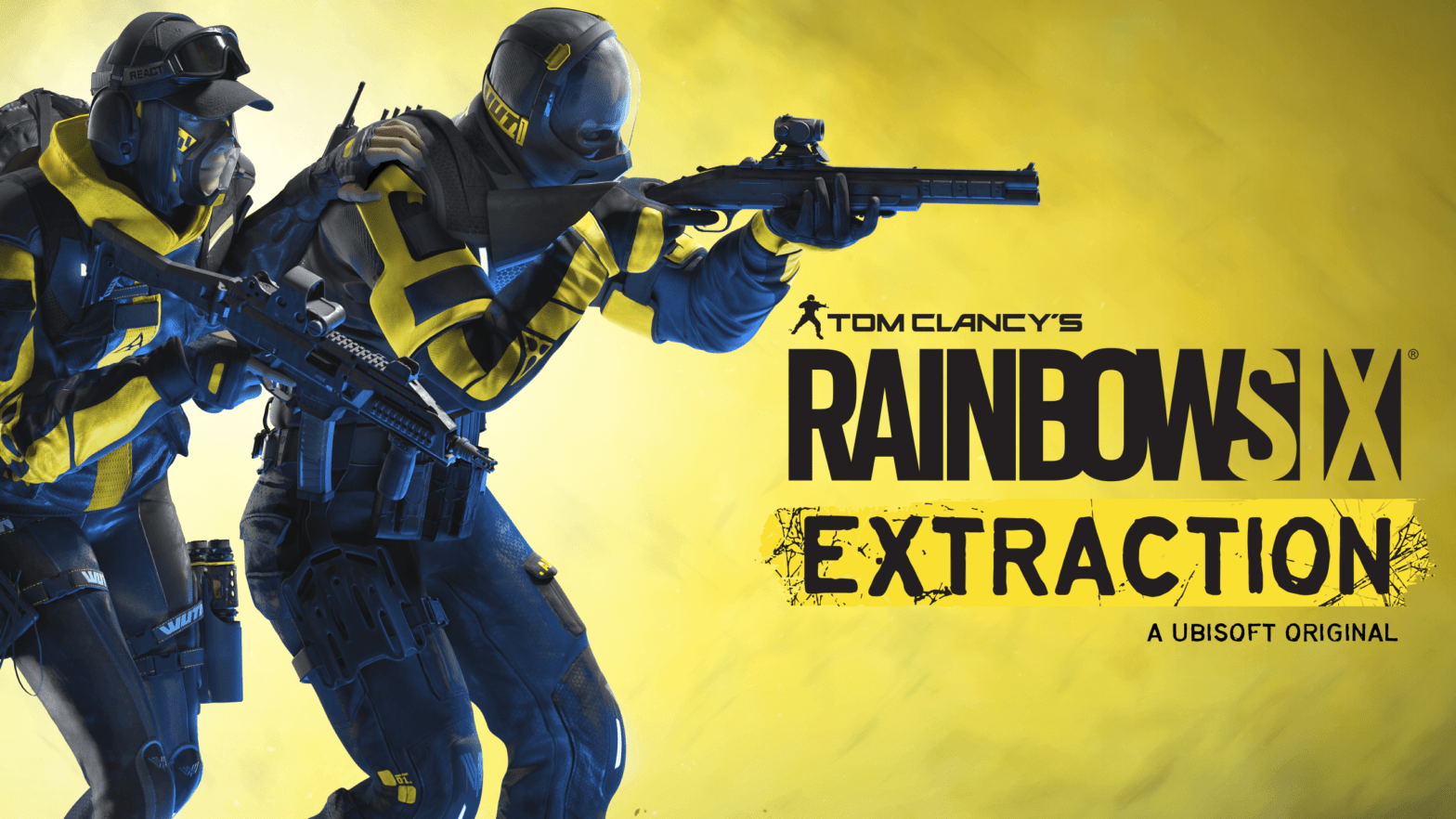 A collaborative Rainbow Six: Extraction, co-op review by Stijn Ginneberge and Kostas Nikolaou.
Updated on 22/01/2022, after fighting through the end game.

The wait until Rainbow Six: Extraction is released is finally coming to an end, and many of the hardcore Rainbow Six Siege fans have been looking forward to it. We had the opportunity to try it before its official release, both in a solo environment and in co-op. With a rough description: we see favourite characters from Siege in a zombie outbreak repression mission. But we have seen this in other titles, even in-game events in Siege. What makes it stand out? Let’s see in detail:

Very good work has been done here. I was lucky enough to see a first image of the game from Closed Beta, in which the scenery seemed dry and slightly indifferent. In the final build, however, the atmosphere is very beautiful and full of vibrant colours and fresh ideas. Playing for a while you will notice that the maps are full of things and scenes that are not repeated, at least not to a large extent, giving an eerie picture of a post-apocalyptic world. The dark mood prevails with a creepy atmosphere that sometimes hides and does not hide enemies. Its purpose is to keep you constantly alert, and in doing so it does just fine.

The overall feel of the Rainbow Six: Extraction is no different from that of the Rainbow Six Siege. Same aesthetics, same animations many times, and same assets with Siege, only here they are used much better. The details in the equipment, in the weapons, in the costumes, and in general the texturing have great detail, without burdening the hardware to a great extent.

The golden section between eerie atmosphere and tactical

The animations are very detailed. We are talking about zombies, though. The signature body movement of infected zombies brings out exactly the vibe they need, helps them stand out among all the enemies you will encounter. In the dark, then, I noticed a nice transition. The shadows are strong where they should be, and with proper lighting so that they are not annoying. Rainbow Six: Extraction is not part of the horror element, after all, but it finds its home in the action category. Tactical shooting 101.

The atmosphere is impeccable overall, and despite the large total playtime between the two of us, we did not experience any major visual problems or major bugs. Nvidia in turn has announced Ray Tracing for this title, so the most powerful machines or consoles will have plenty to enjoy. As a whole, an attack of a parasite, everything is perfect regarding the graphics, and you will notice it in the game.

Rainbow Six: Extraction presents rich lore, at least in the background. Those who remember Outbreak in Siege, in Operation Chimera, will get straight into the mood. Extraction takes place a few years later. We were in New Mexico, where a parasite named Chimera escaped and later spread to other parts of the United States. After adapting to the Earth’s atmosphere, it evolved into the Archaenas parasite.

The Rainbow team thus created a team called R.E.A.C.T. (Rainbow Exogenous Analysis & Containment Team) to create a safe quarantine zone for the affected areas and to reduce the parasite. So your job is to get into the affected areas and take samples to study the parasite. Practically, you will put devices in the Nests or zombies that exist in the world, and you will extract the DNA they contain.

The operators we see are all from Siege and carry their characteristic weapons, with small variations to keep things familiar, but also fresh. Certainly, others will be added along the way. At the moment, there are three categories of operators: Active, Inactive, and MIA. The inactive are the ones who recover after one of the 13 missions after being badly injured, and the MIA must be rescued if they fall during battle.

In the body of the gameplay loop, we do not find significant differences from Siege. Same controls, same philosophy. Where it starts to show real interest are in maps, missions, enemies, and the progression system. At first glance, you can say that the maps are small, but you certainly do not experience them as small (wink wink). They are so full of content and verticality, they utilize the available space to the fullest, maintaining the now-classic recipe in gameplay. Like tech, you unlock them as you progress through the game.

The weapons in turn also are unlocked along the way, by levelling up the characters. There are a total of 69 weapons and 25 gadgets, and gadgets are being upgraded. The silencer will soon become your best friend, as it makes the gun much cooler. Apart from the cool factor, however, the stealthy way of playing is encouraged in every possible way. And the fact is that you will face more difficulty having everything within the map chasing you. Enemies and nests have random spawns (to a degree), so each round looks unique.

The UI in the main menu and within the game makes navigation very easy. The scoring system during the game, I can not say that I was impressed, but it certainly serves to not get lost in the chaos that prevails in the missions. Since we said missions, there are several ones for all tastes. In some you are called to kill some Nests, in others to put explosives and defend them, to trap a certain Archaen, or to save a hostage. (Fuze mains for the win)

As for the enemies, there is enough variety. One is bulletproof, the other is invisible, the third shoots you from a distance, and the other sticks to you. Let me not talk about the one who imitates operators. In short, archaeans have 13 categories with 5 corresponding tiers. Each category has its own ability, and that’s where the co-op element comes in very nicely. Your enemies work together perfectly, so you too must work with your teammates to cope with the challenge.

Rainbow Six: Extraction – the not so smooth implementations

The technical issues were very limited. We had 1-2 crashes in the pre-release state of the game, but probably due to the fact that the servers did not run in the same state as in the release. After release we tested cross play and it worked perfect. Only one crash on our Xbox Series X partner, furthermore the in game voice system is terrible. It’s hard to understand each other at times.

However, while the game is beautiful and well-structured, we could not help but constantly feel that something important was missing. We have the whole zombie status, and the story to support it. But what exactly is the purpose of your missions? The end-game payoff was not as significant as we hoped. We would like more intense end-game content, but we are definitely waiting on how the in-game events that will start with the release will give more value to the lore and new dimensions in the gameplay loop, which has all the basic elements to keep you stuck. Especially if you play with friends.

Updated on 22/01/2022 after grinding out to and the end game of Rainbow Six: Extraction.

While levelling up our react levels, we always felt a bit hollow. I asked myself a couple of times, why am I doing it? The story progression is short and mostly portrayed in codex unlock and reveals of studies. It isn’t a narrative driven experience, the levelling felt more like a grind towards the end-game. The two endgame activities: Assignments and Maelstrom, are supposed to be the true test of your operators and team.

These Assignments are changed weekly but seem to have the same overall structure. Complete a mission and unlock the airlock to the next subsection, which is hidden somewhere on the map. An extra added layer of exploration and drain on your resources, on top of that there are constant waves of Archaens attacking you and your team. It ups the tension and tests your critical thinking. Do I shoot that nest in the distance, or do I save some bullets and use a take-down? My best advice, always go for the take-down, as silenced shots trigger Archaens in proximity anyway.

The reward for this is a 120% extraction bonus for your exp. Yeah, that’s it. This is a good mode to level your under levelled operators for Maelstrom. No extra in game rewards or story content. Just a weekly changing set of maps with extra exp.

Buckle up and get ready for the real test, Maelstrom. Not to be confused with the gang in Cyberpunk 2077. This is the mode you enter with your max levelled operators to take on the toughest challenge Rainbow Six: Extraction has to offer.

I was really hoping this was to be an upgraded version of the regular missions, where we went to unique locations to discover key information. Progress the narrative towards and goal of eradicating the Archeans. Insane, twisted levels where the parasite has taken the environment and changed it to its own favour and liking. The apex environment for the Archaeans to thrive and grow,  fighting unique mutations that force your team to adapt and overcome. But…

Maelstrom is the same mode as the normal incursions but up to nine missions instead of three. And ramping up difficulty and reducing resource drops in each level. That’s it. This is a recurring problem and I mentioned it in my Far Cry 6 review as well.

The goal of it is to gain as much exp as you can with your team to end up in bronze, gold, silver, etc. You get a helmet that you can wear that shows how high you got. But the helmet is only available for a certain duration. After that, it’s gone, and you get to grind it out again.

Furthermore, the enemies and especially elites and Proteans become bullet sponges that make Montange look like butter. So the difficulty ramp is basically this: fewer bullets on the map, but more needed to kill stuff. As a stealthy take-down barely scratches the hp bar and proteans can’t be assassinated.

Maelstrom is more of the same with artificial ramped up difficulty that doesn’t challenge your tactical thinking and has no unique encounters.

Rainbow Six: Extraction is a very enjoyable experience, whether you like zombies or you like to complete themed missions with your friends. Beautifully poses a more modern model for zombies, bringing variety and collaboration to the table. The beautiful visuals and enough content that is included justify the price, since it seems that the content will receive plenty of extensions. The reality is that we did not find the game as interesting playing solo as when we were playing in a co-op environment. The collaborative nature is the greatest asset in the game. What better way than to kill zombies and fist bumps over the internet with your best friend? For all those who want to try a tactical shooter, with a perfect mix of fast and slow elements, we highly recommend Rainbow Six: Extraction.

There is no real endgame or goal that you strive for beyond levelling your operators and react level. After that, it’s a weekly grind of the same maps and modes for a timed cosmetic and a small amount of credits. Whatever the Spillover post release event will be, it will have to be good and unique to keep many returning to Rainbow Six Extraction.

Rainbow Six: Extraction is available at €39.99, a reasonable price for the content offered. Of course for all subscribers of UPlay +, but also of Xbox Game Pass both on console and PC, the game will be included in these services from the first day of release.

Many thanks to Ubisoft and CD Media for providing the early review keys!