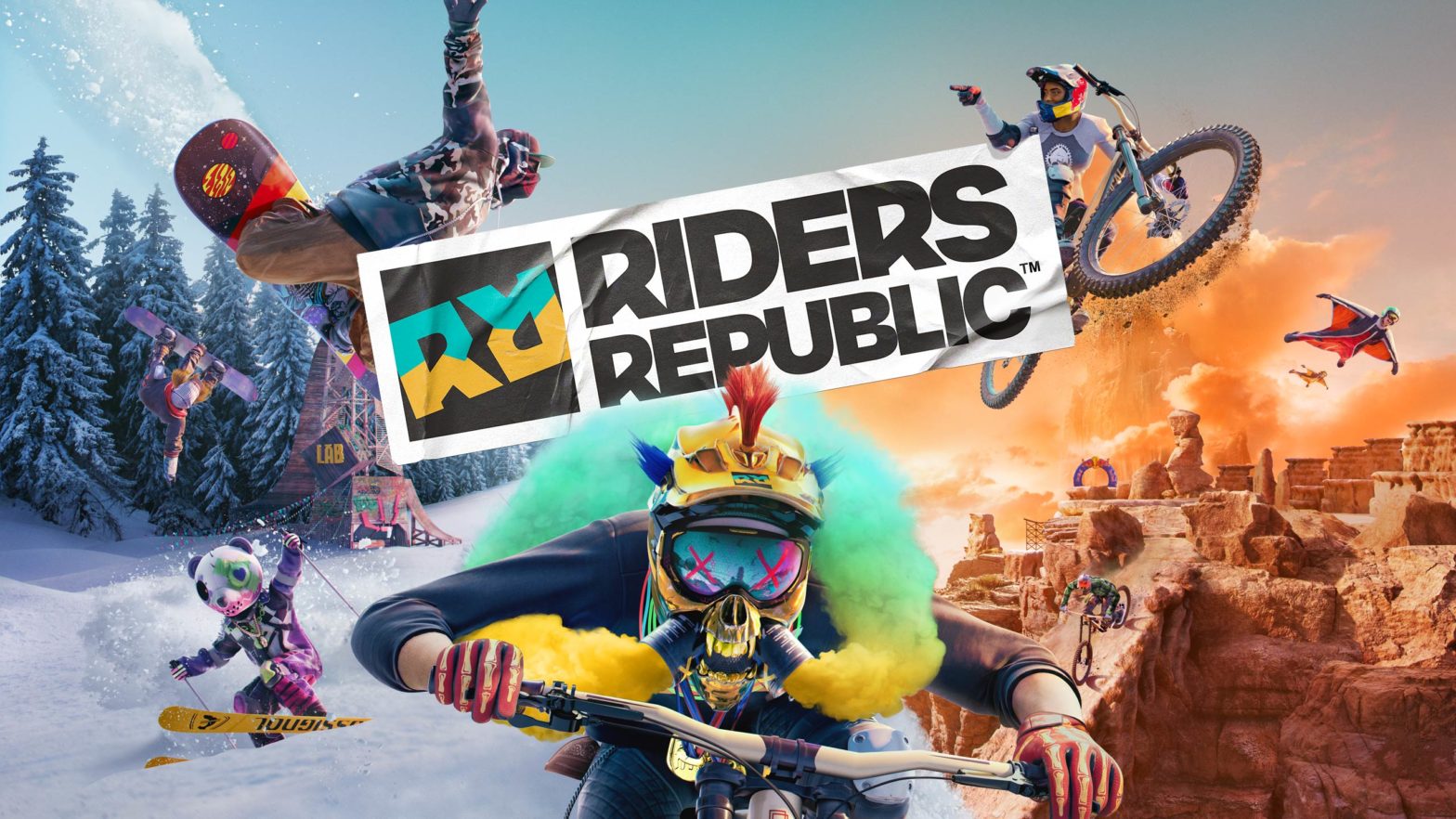 Ubisoft presents Riders Republic with extreme sports for all tastes. And who would not want to try what it is like to go down steep slopes in many ways? This title takes off-road racing to another level. Let’s see in detail its pros and cons:

Very strong work that brings exactly the image you need in a beautiful environment, in which the player runs free. Mountains with dense snow, soils with mud and dust, dense forests and the combination of the three is the image we see in the game. In the general matter of visualization, the game has achieved to the fullest all the important elements. Especially in the changes between short and long distances that some would expect deviations in the frame rate. Or when you fly with the suit and fall somewhere in particular. The scene changes evenly and adapts exactly to the image that the player had from afar.

In particular, bicycles, snowboards, and wingsuits are all also very well-designed. There is a lot of equipment in the game to unlock. Each part is presented in great detail when you unlock it. All of these are very meticulous with each other in great detail; such as the ropes on the snowboard boots, the stripes of the wings on the wingsuit and other trifles. The details are important, and in Riders Republic the details are not missing.

As you go down the snowy slopes, especially with the other players around you, the snow that goes under the board comes to the camera, emphasizing the 3rd person view. The same goes for dirt on the bike. It is an element that emphasizes the realism of the environment and adapts to any sport. In short, you feel very cool when snow / dirt is thrown while you slalom on a steep slope.

Finally, the effects, shadows and textures of the environment are of high quality. Obviously, saving the Engine from great detail spots in an open world game, gives space to designers to give weight to well-crafted landscapes. So sharp edges, day-night and intermediate lighting work perfectly without making the game too demanding for your PC. 4K and HDR on, while the realistic goal is at 60 fps for consoles.

The sound in Riders Republic has few issues and very good elements in my opinion. Initially, the Sound effects worked very well. That sweet and enjoyable sound that the snow makes when it leaves the board on the braking, as well as the dirt on the bike, are extremely reflected. They emphasize realism here too and with the right headset, the atmosphere becomes incredible. Just as important as the air passing by your ear as you develop speed.

The voice actors have done a very good job, and it has a lot of buzz. Practically, the whole tutorial is made up of two characters who explain the beginning to you in the same enthusiastic way. There is always this caprice and excitement that is presented in sport games (see Tony Hawk and Steep).

And here perhaps one of my favourite items in Riders Republic. Initially, it counts a lot that you open the game and the refrain from Black and Yellow is heard by Wiz Khalifa. In the popular titles that exist, we see names from all tastes. Green Day, The Offspring, Ice-T, AWOLNATION, Aphex Twin, Tom Yorke and several others. Then I was impressed by well-known covers like that of Gangsta’s Paradise in ukulele. Finally, there are songs that were written exclusively for the game, which emphasize the dynamic character and invest beautifully in what is done in the game.

Even more important is the adjustment of the tracks and how much they count on the slopes. I focus on that because it is very possible to go down a steep slope with another 5 bots abruptly and there is tension, but there is also a beautiful calm environment from beats when you do a speed race with time alone, in a ski slalom similar to the Olympics. Surely the music investment has succeeded.

Riders Republic: Gameplay above all

Once again, gameplay is the most basic element and as we have seen before, it either deifies or breaks a game. So in this, there are good and bad things. Starting from the basics, the game provides 2 types of control. In one mode the tricks are easier, but it becomes more difficult to handle in speed racing. In the other it focuses more on the camera and the speed than on the tricks, but neither of them excludes the other. Beyond that there is help for landings as it requires a little practice or leave it in manual if you get used to it a bit. All this can be changed any time during the game, along with the camera that can be made to 1st person.

In addition to basic handling, there are the following sports: Wingsuit, Rocketwing, Ski, Snowboard, Mountain Bike and Paragliding. Ski, snowboard and bike have speed races, tricks and an mix of these two. The game keeps it quite interesting in this regard by watching big and small events, from simple tracks to well-made races. Red Bull. All this takes place on well-known tracks in a huge park, where you can follow free roam or the existing routes. Oh, and the ones you can make yourself.

The first thing you do is prepare your character through some presets in faces, hair, gender and colours. Among them, you can paint your character green. So nothing is cooler than going down the slope with the Snowboard with a green Hulk, naked. Customization is done through skin that you unlock with the currency of the game. The skin does not play any role in the gameplay, except in the aesthetic part. But what plays an important role is the equipment that you unlock slowly. The better you do, the better tools they unlock for each sport. Which means there is a lot of Grinding because bikes really make a big difference in Handling, Tricking etc. The same goes for snowboards and skis, as well as Wingsuits and Rocketwings which in turn will have better grip or higher speed.

As you progress through Riders Republic you can even concentrate on a particular sport with the game unlocking more content around that sport. I personally liked everything except Rocketwing, which I found slightly awkward.

Levelling up is done with stars that you earn, that in turn unlock the progress of your career. The more you level it up, more tracks will open, and content and sponsors to invest in you as well. The goal is above all to reach the Invitational, which also unlocks the most beautiful content of the game around Skins etc.

As mentioned above, Riders Republic is evolving around you. If you like a particular sport, it will open more about it. Without this forbidding progress in the rest. There are competitions that have a mix of sports. You can start with a bike and then change to a snowboard or wingsuit or whatever.

In all of this, the basic separation is speed and tricks. It’s perfect how they have built a whole community that can compete in different sports. There are regular races, usually speed, where 50-60 players gather online and run in rounds on various tracks and various sports. In all the tracks, you can play alone in speed races against Bots or in various tracks that aim to collect points from the tricks. What won me over was the narration that describes what you are doing at the moment. There are stunts that we see many times in extreme sports, such as balance in narrow spaces, and specific tricks. Finally, there are some glowing events that I love, especially like doing tricks with old equipment or running races with pizza delivery bikes listening to an Italian delirium from the Voice actor.

A key feature of Riders Republic is the Backtrack. As you move to any point of the track in case of accident or just mismanagement, there is the Backtrack which turns back time for you and leaves you at the point you choose. On the one hand you avoid the difficulty of starting the track from the beginning, but on the other hand you lose every point you had built in the specific stunt or the speed you had depending on the theme of the race. So be careful. Nothing too serious. It just makes you respawn to a point most of the time when it’s not optimal at all. For example, by throwing the character down again either because it starts out wrong or because you just had to have, or not have the speed etc.

Unfortunately, another point that makes it look not well optimized, is generally the sense of space that the player has. Several times I had the ambiguity of how close I am to something so that I can perch on a tree or fall on a bot. Which also creates an issue. Essentially, at the beginning of the round, the players all start together without affecting the contacts. But then, if there is convergence with another character, the player brakes or loses its route. This would be good if it was the same for everyone, but it is not because in AI racing, bots will throw you into any collision regardless of who was going faster. Something that does not happen in matches with human players. There, it works like any conflict over whom, where and how rough came to displace the other.

And something more regarding optimization

I would like the camera to be less independent of the course. It’s a bit of a niche, but it does play a role in the progress of the game. When you are not playing in trickster mode, it is convenient, because you adjust the camera in speed races, so you can better see what is coming. But what affects the camera is that you lose the sense of rotation. So you lose the angle and … you meet the floor! In this I would also like the routes to provide a map, or just the route to be clearer to have a better demarcation on the slopes.

On the one hand, the freedom that the game creates is incredible. On the other hand, when you do a natural sport like Snowboard, the image of where you are going is very obvious because of your set course. However, as the slopes become a bit strange, several times you miss the checkpoints you have to follow. So you have to start again from the beginning, because you are staying way far behind as the difficulties of the track change.

The game has some points which unfortunately spoil its good overall picture. It bothers me a little more because it really is a very, very good game to spoil the general feeling with something as trivial as gameplay optimization. I literally felt more free in the game than I did in Steep in terms of movement, and in The Witcher in terms of maps alone. It really gives the image of a Riders Republic, and all the ideas of freedom and riding is the best I have played in such a style for a long time.

I highly recommend it to anyone who wants to start something different from the usual sports and wants to get in, either slowly with the well-crafted tutorials, or on the spot from difficult tracks. You will definitely enjoy the competitive spirit and grinding of the new equipment that will get better and better. Riders Republic is currently at €59.99 at Ubistore and for anyone who can afford it, it’s worth it! The rest, be patient, Christmas discounts are coming. It’s worth your time, anyway.

We warmly thank Ubisoft and consequently CDMedia for providing the review copy we used.