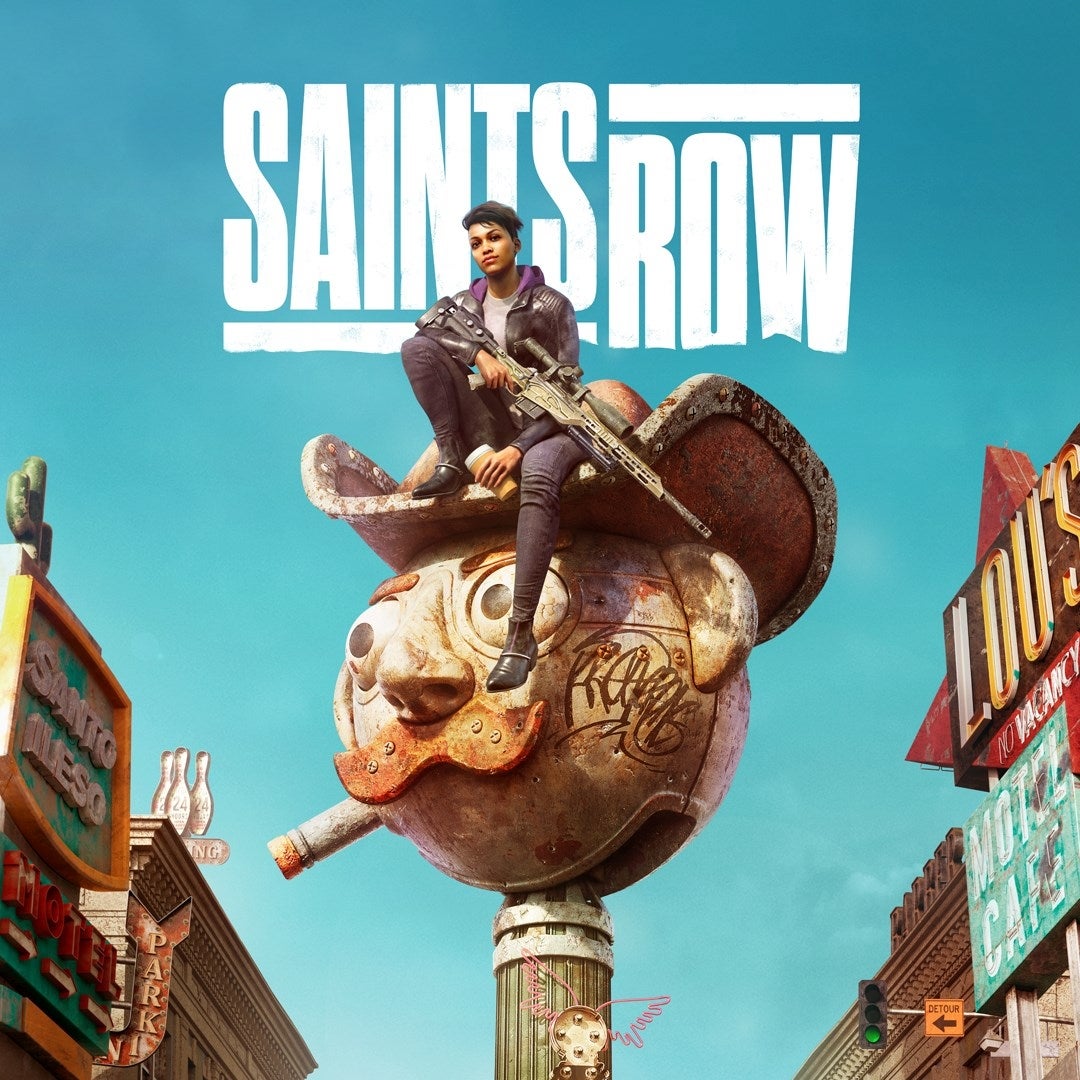 Usually, upon hearing the title Saints Row, many players will mistakenly refer to it as the more surreal version of Grand Theft Auto. Of course, Volition over time managed to make the Saints Row IP unique and get rid of the “GTA clone” stereotype. In doing so, they created a relatively original series of open-world games that have unfortunately flown under the “radar” of the public in recent years. But no one expected the announcement that the next game in the series would be a reboot.

Thus, on August 23 Saints Row (2022) was released on PC through the Epic Store, on specific Playstation systems, Xbox, and Google Stadia, promising to deliver to players the ultimate experience that a Saints Row can provide. So let’s see how well it kept that promise!

Saints Row takes place in the fictional city of Santo Ileso, which is plagued by all kinds of criminal activity. So the player, Neenah, Kevin, and Eli are on a quest to become the city’s biggest names. To achieve that goal, they will create the Saints. An organization that will try to gain a monopoly on all kinds of crime and fraud that can happen in the town. But the competition is fierce. The Los Panteros, Marshalls, and Idols will be a big obstacle for the protagonists, as they have their own agenda for domination!

Specifically, our story begins “in media res”, where our hero and his team make their first appearance without any specific explanation for their purpose. Moments later, we discover our hero buried and half-dead, reminiscing about how he managed to get to that state.

So our real story starts a few months back when every member of the core team (except Kevin) belonged to some “team” to simply survive in the world. Specifically, the main character starts as a member of the Marshalls, a private military organization. Neenah joins as a driver for Los Panteros, a gangster group. And Eli is still part of the Idols, an anarchist group. An ancient book, however, will bring these 3 groups into conflict, forcing our heroes to either clash with each other or oppose their groups. Everyone chooses their friendship, and so our heroes make 3 big enemies.

So we finally get to the “branching” of the story, where our heroes decide to create their own organization called Saints, with the goal of becoming the rulers of this city. Something much more ambitious than the simple need they had in the beginning for survival. Our story will continue to deal with how the Saints will make their mark on Santo Illeso, but we’ll also get some more information about the background of the main characters through missions that will better unite them as a team.

In general, the story is not something remarkable. There are some problems with its foundation. Its pace is sometimes quite slow, its ending is not shocking. And of course, its attempt to make 4 criminals, who are ready for anything, seem honest and good does not help much to understand their characters. In other words, the story is there just to be there. Which might not bother those who pick up Saints Row just for its ridiculous and over-the-top action.

As one of the most basic pieces of a sandbox-open world game, Saints Row’s map may not be groundbreaking, but it delivers an interesting enough destination that works well for the gameplay. Santo Illeso is divided into 11 districts, each with its unique characteristics. We have the city centre, wastelands, Latin ghettos, wealthy areas near the sea, and more!

In terms of graphics, the world of Saints Row does not seem to be adapted to modern standards. Driving through the city, one can easily see the existence of not many details in the streets and buildings. In general, the faces of the characters and the cars give the feeling of a cartoon, which may or may not have been an artistic choice.

The exact opposite applies to the game’s cutscenes. Here one can easily see the love that went into the creation of these scenes. Where the animations, as well as the small details on the characters, are very evident. The sound can sometimes not be quite satisfactory, but this can easily be fixed through the settings.

I have to admit that the graphic presentation disappointed me too. An open-world game of this scope cannot resemble a five-year-old game in 2022! This will definitely not prevent one from enjoying the title as a whole. As mentioned before, the map works perfectly for the gameplay that Saints Row offers, for anyone who doesn’t care completely about the graphics.

Gameplay: Be your own boss!

Starting the game, the player will be able to create the protagonist of the game through a HUGE variety of customization. Where every detail of the protagonist can be changed. Unfortunately, the only thing that can’t be changed much is their personality, which would add another layer of depth to the main character’s customization. Even so, the character we have is quite funny and ironic, which fits the Saints Row universe perfectly. At the same time, the rest of the cast consists of a fairly diverse list of characters. Where everyone adds their own brand, so that the cutscenes and the dialogue in the gameplay give the feeling of humorous surrealism! Unfortunately, Saints Row also falls into the trap of making too many casual jokes, which can make the characters a little annoying.

The activities one can partake in at Saints Row may not have quality, but they certainly have them in quantity!

Firstly, the missions that make up the main story of the game are definitely one of its strong points. The player will go through a lot of crazy scenarios. These are filled with excessive action that reaches the point of ridiculousness, something that every Saints Row is famous for. However, the dialogue during these missions will often tire the player, despite the presence of some very successful jokes.

To achieve his goals, the player will have to go through a big number of enemies using the classic system of a third-person shooter. This with a mix of special powers that are sure to cause a chuckle when using them, either because they are strange or either because they are too strong! Of course, we cannot forget the large list of weapons that the player can have at his disposal, which consists of; classic weapons such as pistols, carbines, and rocket launchers, but also strange ones such as laser weapons, plastic hammers, and incinerator cannons.

As if that wasn’t enough, each of them can be customized by the player through a satisfying list of customization, as well as upgraded by completing various challenges.

All of this may compliment the game, but that doesn’t mean its combat system doesn’t have its problems. Its weapons may be unique in their presentation, but in actuality, they all function almost identically. At the same time, the enemies may be many, but they show very little to no variation. Because of this, I didn’t have to change from the original assault rifle I was given, and the game never tried to prompt me to use something new.

Another strong point of Saints Row is the vehicles that the player can use to move around the city or eliminate their enemies. Specifically, there are various types of cars, motorcycles, helicopters, jets, and aeroplanes. Each of them hides a secret ability that can be unlocked through special challenges, which adds another layer of uniqueness to them. Of course, we can’t forget the surreal vehicles that every Saints Row has.

This time we have inflatable skateboards and motorbikes, but also huge wacky jets with weapons. But we’re not done yet! Saints Row offers an extensive list of customization for vehicles too! The player will be able to change almost every feature of their favourite transport, such as the colour, rims, material, and more!

What someone expects from an open world title with vehicles are radio stations, which are not missing from Saints Row. The game offers quite a satisfactory list of stations, which perfectly covers the different musical needs of each player. The songs may not be easily recognizable, but they are quite good! In particular, some of them will be heard at specific moments during missions to stimulate the atmosphere that will prevail at that time. A fact that the player will certainly appreciate.

Another great attraction of Saints Row is the side activities. Some of them are closely connected to the course of the main story. The rest are for the production of large sums of money. In your quest to create your criminal empire, you will have to build various shopfronts to carry out criminal activities. There, you will be asked to complete various unique missions, with each one growing the maximum money generation for that specific business.

Unfortunately, these missions may be interesting at first, but over time they can tire you out if repeated enough times. Which you will be forced to do up to a point if you want to progress some central missions. For this problem, the game offers more activities for the player to break the monotony. For example, you will be able to fulfil Bounties, commit petty theft, or eliminate groups of the Los Panteros and Idols.

Final thoughts on the game

Overall, Saints Row’s gameplay is worthy of an AAA title in today’s industry. But the long list of bugs that have surfaced dramatically reduces the experience of many players. I encountered quite a few of them myself, but that didn’t stop me from enjoying the game immensely!

Reaching the end of this Review, I believe that Saints Row is a potentially solid reboot, which can provide fun and laughter to its audience. The dialogues can be boring, the story can’t captivate you and the gameplay loop can get repetitive at times, but that doesn’t necessarily make it a bad game. It just doesn’t make it a great one. Keeping in mind the vast amount of content that this title offers, along with the extreme customization of almost every item and character there is, one can easily find fun in this weird and ridiculous universe.

Is it a really good reboot?

Saints Row is a reboot aimed to satisfy the series veterans by bringing back activities from the older titles. Of course, this time, they were much more simplistic and without real character. At the same time, the story and characters are inferior to many previous titles, which may not be apparent to new players. Also, one of the most important traits of a Saints row was the tendency to make fun of games, companies, and actual products and make successful sex jokes at every opportunity. Which is something Volition wanted to avoid doing this time! So if you are fans of the Saints Row series, this title is not for you, because it is the weakest in every way.

On the contrary, if you haven’t played any of the previous games, I highly recommend it, since, of course, it’s on sale. The big question is whether Volition will be able to perfect their game, which was not ready for the shelves, and of course what the future holds for the Saints Row series in today’s highly competitive market…

If you are looking for a new keyboard to play Saint’s Row with, be sure to check out our latest review on the SureFire Kingpin!

We would like to thank Enarxis Media and Deep Silver for the review copy we used!