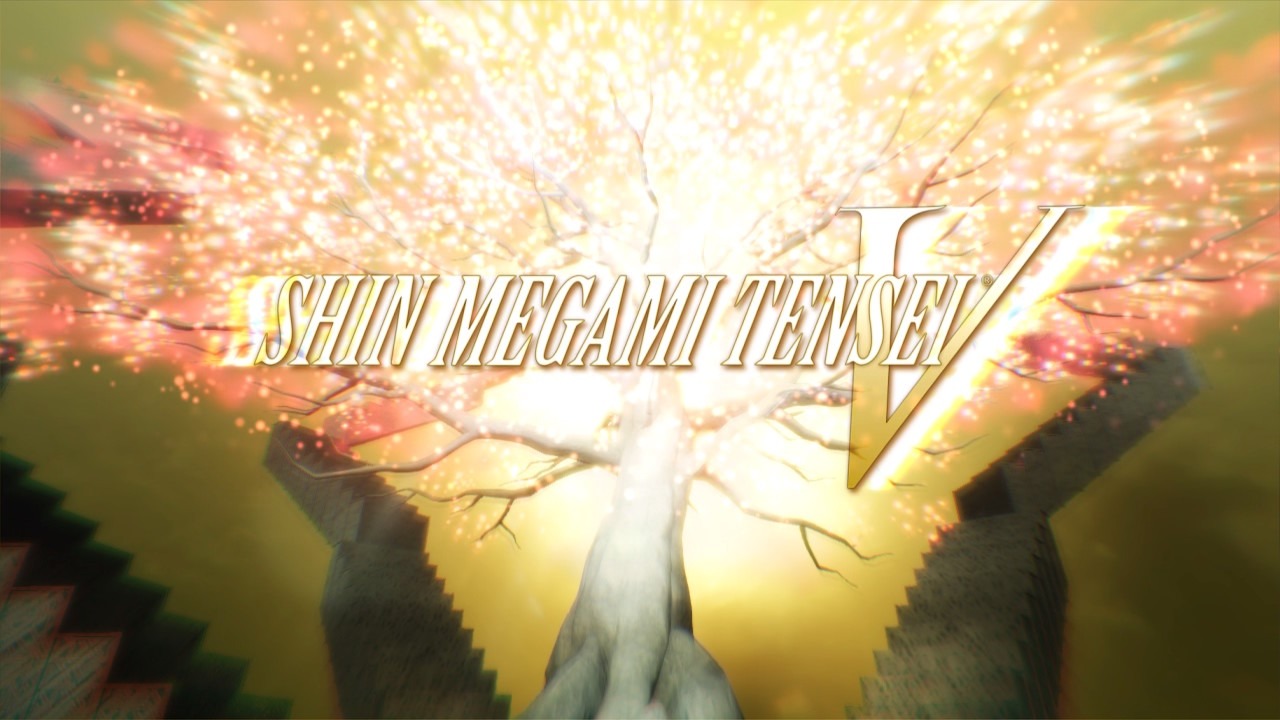 If you want to play Shin Megami Tensei V with the Japanese voices; check out the Nintendo e-shop for the free DLC. Or, you know, CLICK HERE and scroll all the way down.

As a disclaimer, I should mention this is my first Shin Megami Tensei game. George Makridis recommended playing it because I do like JRPGs. See my Monster Hunter Stories 2 review or Tales of Arise Demo impressions article. So I dipped my toes into the world of Shin Megami Tensei V.

As I mentioned in the intro, the story in Shin Megami Tensei V is a slow drip where every drop gets you excited. But the next drip can sometimes be hours away. The story starts off strong with impressive cutscenes and introductions to most of the characters you will meet.

But by the time you meet some of them again, you probably forgot about them. It can take quite some time to get to the next story cutscene. More characters are added along the way as you progress the story, and honestly I kinda forgot about everyone that got introduced at the start.

The pacing is a bit slow to be the main motivator in the game. Not that the story is bad per se, it starts off wonderful, and I was looking forward to figuring out what was going on. And while the exploration and combat are excellent, I often wondered; what am I doing this for again?

Side-quests litter the world Da’at and are little stories unto themselves, sometimes with choices that allow you to pick different sides and have divergent outcomes. But they can also be your run-of-the-mill kill quests.

Either it’s a go kill those bad demons or you get side-quests which are fascinating and have you going over the dialogue, greedy for lore and story that is so far and few in between in the main story. Pondering a moment over what choice to make or whom to kill. Eventually, the choices you make will impact the ending of Shin Megami Tensei V.

Cinematic wonders on the Nintendo Switch

It was hard to skip the combat cinematics when I used one of the special abilities the demons in my party performed. And the cinematics that drive the story forward are impressive and set the mood perfectly.

From the high school introduction that makes Shin Megami Tensei V feel like a light-hearted story at the start. To the introduction in Da’at where that feeling of dread sets in as you gaze upon the post apocalyptic desert of Tokyo.

From the epic animations of special abilities and impressive boss monsters, combat was good purely because of its design, party customizability and powerful magic.

Shin Megami Tensei V’s combat is very rewarding if you play it strategically. Just like it was designed to be. The press turn battle system was new to me and I absolutely love it. Strategic thinking and planning ahead are rewarded with devastating turns, leaving your enemies severely weakened or dead.

The press turn battle system works like this. You have a limited number of actions depending on the number of alive members in your party. Whenever you get a critical hit, hit an enemy with an element it is weak to or pass the action of a party member, your action is recovered instead of spent.

So instead of a 4 action turn, you can get up to an 8 action turn if you plan it right. But do note that missing or having an enemy block an attack spends 2 actions. It’s crucial to plan your attacks and make sure you hit those weaknesses. Swapping out a party member for another one also recovers the action, so having a party member with the wrong defence or offence is not that punishing.

Turning over every rock in the desert

Exploration is fun and kinda mandatory. Fun because sprinting across the desert and sliding down the dunes was incredibly satisfying, and some corners hide some hidden treasures to reward your detour.

Like treasures, you will also run into Miman. These little guys are pawns of Gustave, the vendor of items and essences in Shin Megami Tensei V. When you find a Miman you are awarded some glory and if you reach a certain number, Gustave will reward you with a nice package of items.

Miman are important because of the Glory rewards, Glory is used to buy miracles. Miracles are passive traits that you purchase and can be quite costly. These passives improve your combat skills, affinities, monster cap and so on. While levelling is a small increase to your stats, the Miracles are the biggest jump in power and offer customization for your build.

Gotta talk to them all

Recruiting demons is not done by throwing a ball or net at them. But by the peaceful way of conversation and bribery. A refreshing take with sometimes hilarious conversations that can break the combat grind every once in a while.

Still, I sometimes felt like playing the lottery when it came to these conversations. There is a trick to learning what personality certain demons have and what answer you have to give.  But learning those personalities is trial and error, even after being sure what I had to pick I sometimes ended up failing as their response was suddenly different.

Once you have collected them you can train them up by fighting with them, but their biggest use is fusing them into stronger, better and fully customized demons to your liking. Fusing them is the first step to making that perfect demon for your party. The next step is using an essence of a demon that has certain abilities that align with your new demon and adding them to skills.

It’s a system that allows for limitless customizability and I often spent time in the menu looking at affinities, weaknesses and the essences at hand to make another beast of a demon that fit a certain role perfectly.

Handheld performance was pretty much in line with the docked experience. The big difference was mostly visual. Handheld Shin Megami Tensei V was more jagged and had a lot more rough edges when it came to the scenery. The amount of bloom in Shin Megami Tensei V hides any imperfections on smaller models like the character models.

Battery life handheld for me was three to four hours, the difference of an hour is mainly because I spent one session just grinding out levels using the auto battle system while watching some Netflix. Less button presses and a more inactive play style prolonged that session.

Angels on the big screen

Docked is the best way to play Shin Megami Tensei V. It looked better, and the bloom was a lot less disturbing. Overall performance was pretty unstable at times. Some vistas are impressive, but the demons moving in the distance took just a little more power from the switch than it can handle. For a turn based JRPG, an occasional stutter or FPS drop isn’t the end of the world, but it’s an eyesore nonetheless.

Rendering the huge open worlds of Shin Megami Tensei V is taxing the system to the brink of its capacity. But it’s worth it nonetheless, the zones are huge and offer immense freedom of exploration. But the huge maps filled with demons and secrets come at a cost.

Thank you, CD Media (check out their website; it’s pretty cool even if you don’t speak Greek like me) for sponsoring this key to BGeek and allowing me to dip my toes in the world of Shin Megami Tensei V.

While Shin Megami Tensei V is not my cup of tea, it strikes true with some of its features. Fans that I know say they are having a blast with this installation in the SMT series. If you are a fan of the series, I’m 100% sure you will rate it a 9/10 or even 10/10 because the minor gripes that disturb me won’t bother you at all.

If you are new to the series, like me, it will be a hit or miss. You could become the next Shin Megami Tensei mega fan, who knows?