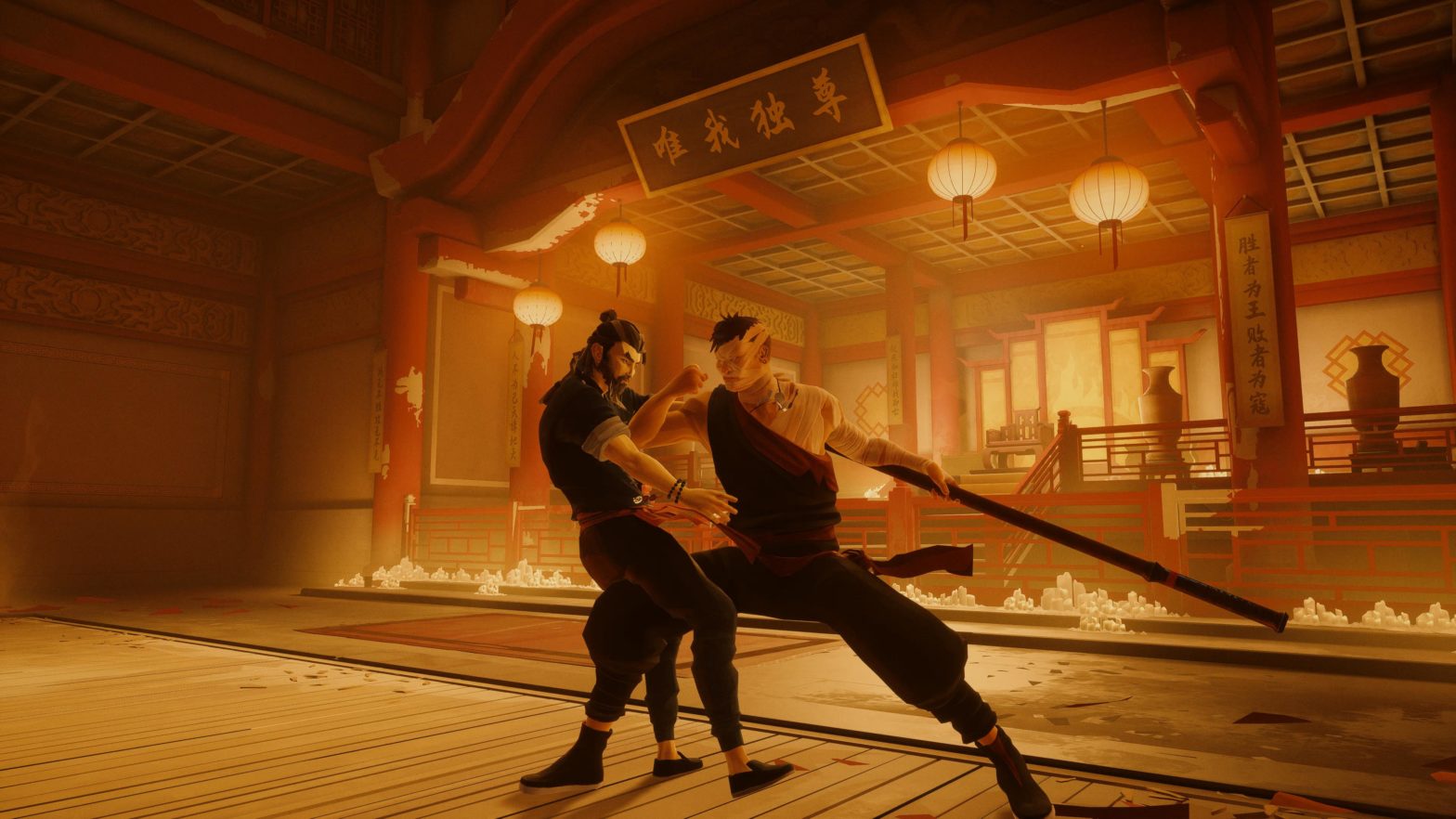 Remember how I told you guys that there were tons of games like Horizon Forbidden West, yet none could really match it? Well, it’s time to shake things up. Kick it up a notch (heh). Because there’s definitely no game like Sifu. Fighting games are a peculiar genre. They always look good, they make you feel nice when you’re winning, and when you lose you always know it’s because of your own shortcoming. Still, they all look the same in my eyes. Blame it on my super short attention span or the fact that I’m Gen Z; fighting games never managed to keep my attention for long. But Sifu did. Sloclap managed to find that secret crabby patty recipe, and they even added that McDonald’s Szechuan sauce. They actually made a good fighting game. Hear me out:

Sifu finds brilliance in simplicity. It’s a very straightforward approach to video games, in an industry obsessed with complexity.

All images in this article are in-game screenshots, taken from the PS5 version of Sifu.

Graphical fidelity is all the rage nowadays. More polygons. More particles. Bigger draw distance. Sharper edges. The people at Sloclap don’t concern themselves with any of that. Sifu is very straightforward in its approach to visuals. It offers a unique style, sitting somewhere between cel-shaded and high-quality animation film. Simplicity is elegant, and there’s nothing that could describe the Sifu experience more accurately. I never thought I would describe a fighting game as elegant. Vibrant colours, a unique aesthetic, and fluid animation. It’s simple, it’s minimal and it’s stimulating. This game is so pleasing to look at, it makes you crave to see more of it. But there’s a catch. To see more of the game, you actually have to earn it.

There are five different areas for you to explore, each being the hideout of a specific boss you have to take down. Obviously, these are linear levels, and you can rarely go back to where you came from. However, these levels open up as you progress through the game, and you unlock hidden pathways or secret items. And trust me, you will be re-visiting all the levels multiple times. Each level has its own theme, inspired by the levels’ final boss. You also have your own dojo you can go back to after going through every level, to find your composure, examine the clues or even practice before heading to your next mission.

All the levels are expertly designed. They look incredible, but what’s more important is they cultivate curiosity. You can’t help but wonder what’s behind that next door. The animations are incredibly fluid and the unique art style will make you activate every single finisher, even if it’s not the wisest choice. And there’s great variety too. You can chain up multiple finishers on different enemies, and you’ll get multiple animations. It almost feels dynamic, although it most certainly is not.

Out of the way, but still interactive

The UI here offers a heavily hands-off approach. You will only see it when needed, and that is when you’re in combat. Even then, it shows as little information as possible, but it’s still very informative. The only thing you really need to know is your HP, your age (a core gameplay mechanic, we’ll get to it in a bit), your score, your focus, and your structure meter. That’s it. You’ll get the occasional button prompt to interact with your environment as well as finisher prompts. But this game does not hold your hand whatsoever.

The story is pretty simple and it’s only there to get things going. It’s nicely implemented though, with some incredible cinematics. When the protagonist was 12, his dojo got attacked by the some evil people who killed his master, Sifu, by defeating him in kung fu. Growing up, the protagonist vowed to avenge his master and spends 8 years in training, in order to kill every last member of the kung fu mafia. There were five members, and now, each one has their own hideout and goons you have to defeat. By going through each hideout, you gather clues that help build a case against each boss, and build their characters. There’s not much more to say without spoiling anything important.

Most people expect to buy this game and get a good 8-10 hours of some good combat and great visuals. Some fun beat ’em up to unwind after a hard day’s work. Sifu is nothing like that. This game will not hesitate to beat the living crap out of you. It’ll test your reflexes, it’ll test your diligence, but most of all it will test your patience. It’s a difficult game. Sifu punishes your mistakes not always immediately, but in the long run. It will force you to strive to do better in every run. Because you have no other choice if you’re looking to beat the game.

From two button attacks to combos

Sifu starts off by building on pretty basic combo structure. You can combine light and heavy attacks to pull off some devastating combos. You can obviously block and dodge, and even counter if you time it right. The goal is to lower your opponents’ structure enough to use a finisher on them. Every time you knock out someone, you gain some health. I told you, being good at this game can be very rewarding. Soon enough you’re introduced to focus attacks that take some charging to use, as well as all different kinds of melee weapons, that have both different levels of durability and different uses/attacks.

Be careful however, because even the weakest of goons have the exact same abilities. They’ll beat you up with the same weapons and abilities. Problem is, there’s endless waves of them and you’re the only one in your team. It’s not exactly balanced but it sure as hell makes you feel cool when you’re winning. There’s a steep difficulty curve when you get to the bosses, especially the second one. Every enemy has a certain pattern of attacks, to which you get accustomed after a while. The bosses don’t always work like that, and it’s not always the choreography’s fault. More often than not, it’s the controls that fail you, but we’ll get to that in a bit.

To hell and back again

But let’s talk a bit about the core mechanics of this game. They are what sets it apart from the competition after all. Every time you die in Sifu, you can revive yourself by aging a little bit. How much you actually age is affected by your deathstreak. Every time you die, your deathstreak is added to your age. You start from age 20 and can go up to about 70. With every decade that passes, you lose some base HP but gain some base damage. It’s a double edged sword; you get more fragile, yet more deadly as you age.

Make no mistake, this does not mean that Sifu is tolerant to your shortcomings. You have to keep an eye on your age. If you beat a boss and advance to the next level, you will always begin the unlocked level at the earliest age you unlocked it at. Plus you still have the age ceiling of 70, and your death count is carried over. However, failing is encouraged in this game. If watching Karate Kid taught me anything, it’s that there are no failures, just lessons. And that’s exactly what Sifu’s approach represents.

You see, you can unlock abilities each time you die by spending your score points. Most abilities have age limits and can only be unlocked before you reach a certain age. You get to keep your abilities only for the run in which you unlocked them in. To keep them indefinitely, you have to permanently unlock them, by spending five times the score you need for unlocking them once. Obviously, more powerful abilities cost more to unlock. Yet, permanent unlocks is the only viable way to go, since you will have to attempt multiple runs from the first level to get optimal results. And trust me, you don’t want to go through that with no abilities.

Incredible when it works, but that’s not always the case

Now, Sifu is a demanding game. Every hit could take off a big chunk of your HP bar, or even knock you out. What makes the difference in this kind of games are the controls. And that’s a hit or miss in this game. When it’s good, it’s great but when it’s bad, it makes you want to throw your controller at your screen. Sometimes, commands don’t even register and you can’t tell if it’s because of the animation, or you’re locked in a combo, or even if the button press didn’t go through. And that’s completely random, it’s not a bug that’s easy to replicate, even though it usually happens with bosses.

And then there’s the visual bugs. There’s been times when I enter a room and that hasn’t even loaded in, and I just get stuck there. Whether the game is waiting for a cinematic cue, or you closed a door behind you, there’s no way out except for restarting your run. That can be infuriating. Let’s not forget about clipping into objects during fights. Pillars will become your biggest nemesis. You can’t move, you can’t block, you can’t dodge, and you can’t hit. You can only suffer until you’re either knocked down or knocked out. Although, I have to say that I had most of this review ready before I started reviewing Horizon Forbidden West and Sifu has received a patch since then, so at least the frequency of these issues might be already reduced. The bugs are by no means a deal breaker, but they can be extremely annoying.

Sifu is a very exciting game. Not only because of the unique art style and the exciting gameplay loop, but because of how it entices you to keep trying to best yourself. It’s not really a fight against the groups of AI enemies, or even the bosses, but a fight against yourself, testing how long you can last, how far you can make it. The whole game is set up in a way where it constantly offers you scooby snacks and makes you want to perform tricks in order to earn some more. It’s genius, and it manages to be all that in a game that never breaks character and never conforms to industry standards.

If you’re good enough, you can beat this game in around 7-8 hours. If you’re hopeless like me, you’ll be 20 hours deep and still not be able to get through the last boss. Even so, I thoroughly enjoyed myself while playing through Sifu. Sloclap has done a damn good job.

We would like to thank Sloclap for providing the review copy we used in this review.