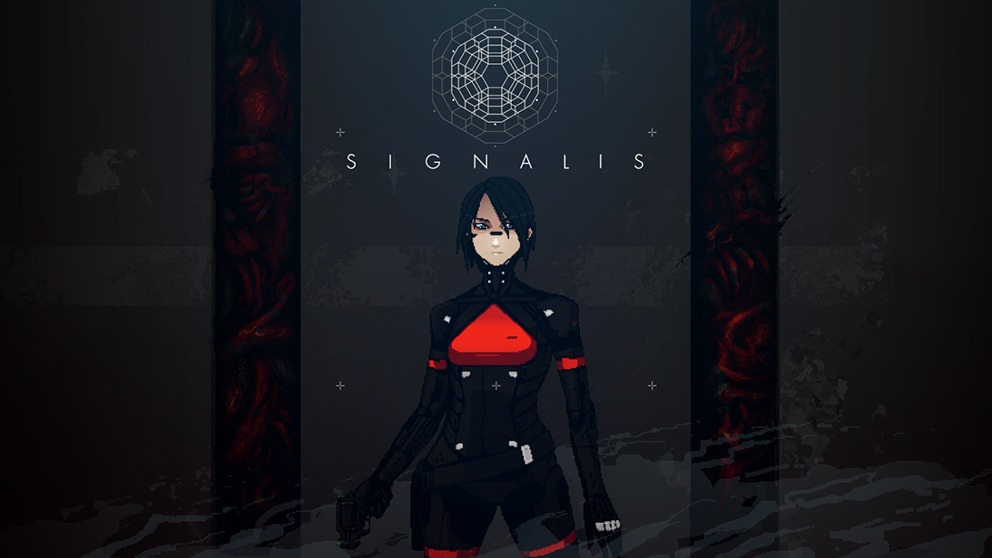 The survival horror genre had its definition muddled over the years. While series like Resident Evil and Silent Hill gave it its distinct gameplay elements, innovation within the genre has been slow and sporadic. Titles like MADiSON and The Medium have showcased that today’s developers can use the titles of the past to build something contemporary, albeit often uninspired.

Enter rose-engine, a studio comprised of two professional illustrators and game designers – Yuri Stern and Barbara Wittmann. The game is published by Humble Games and Playism, helping the small but promising team to reach a wider audience than it could on its own.

Signalis, which is marketed as “a classic survival horror experience with a unique aesthetic”, has been in gestation for several years and has finally been released to the public on October 27th, 2022. Signalis is anything but “classic”, however, it carries its inspirations and survival horror heritage like a badge of honour. What does it do so differently and is it really as unique as its trailers would have us believe?

Story – Layers of Lovecraft and Chambers

In a genre where serial killers, hauntings, and mental illness tropes reign supreme, innovation is long overdue. Signalis is a sci-fi story of survival at its core, but its surface-layer story is only a glimpse at what its world truly has to offer. Players assume the role of Elster, a Replika (the game’s take on androids) looking for a woman who she was paired with on an interstellar journey of planetary discovery.

After crash-landing on an ice planet, Elster wakes up from her hibernation only to discover that her partner is missing from the ship. Setting out into the unknown, Elster begins her journey towards the planet’s mining facility, in hopes of finding the mysterious woman whose identity keeps eluding her. Saying more about the game’s story would unfortunately be revealing too much about it.

Signalis relies on surprising the player by challenging the genre’s status quo and by swiping the rug from underneath your feet when you least expect it. Best of all, much of its story is entirely optional in the sense that the game’s many documents, logs, and diary entries don’t have to be read. You can simply enjoy its gameplay and frights without delving too deep into lore if you’re more of an action survival horror fan.

Storytelling is undoubtedly Signalis’ strongest aspect – it’s not only “unknown”, but deliberately “unknowable”. The story takes inspiration from H.P. Lovecraft’s Cthulhu Mythos, as well as Robert W. Chambers’ The King in Yellow. Both are well-known for how open-ended their interpretations, symbolisms, and messages are. Combined and wrapped into a surrealist survival horror story, Elster’s journey is anything but ordinary or predictable.

Given her biomechanical nature as a living robot, Elster’s memories are muddled by time and the cosmic horror of the unknown danger presented by the icy planet she finds herself on. Interspersed throughout her story are first-person segments which represent vignettes from the lives of people from her past, or those who’ve lived on the planet years before.

Signalis’ biggest strength is the fact that every player will find their meaning in the information presented to them – and no interpretation is outright wrong. This makes the game highly replayable, especially given its five distinct endings which depend on Elster’s mental state at the end of the game’s 10-hour runtime.

Gameplay – Familiar Survival Horror with a Fresh Coat of Paint

Signalis adopts an isometric camera perspective in stark contrast to many of its first-person and third-person contemporaries. While it may feel jarring to play a survival horror game from an isometric perspective at first, the game does a good job of immersing you in its world.

You can choose to control Elster either via modern 360-degree controls or by using traditional tank controls à la Resident Evil to do so. Whichever control scheme you choose, you’ll soon discover that Elster’s movements are slow, deliberate, and precise. The game is very easy to get a hold of, and you won’t have issues navigating its world, managing your inventory, or fighting enemies. It makes subtle but important steps forward with tried-and-tested survival horror gameplay – for example, any and all documents you pick up and read are permanently stored in your inventory. This makes solving puzzles much less cumbersome, a feature many of its contemporaries and influences sorely lack.

Speaking of subtle innovation, Signalis uses an auto-aim combat system, meaning that you’ll need to aim at a certain enemy for several seconds before shooting your weapon for maximum damage. This increases tension and ensures that you’ll reserve your ammo for the times when you absolutely have to use it. Likewise, the frequency of fighting or evading enemies will affect Elster’s psychological state and lead you down the path of several different endings.

Puzzles are a survival horror genre staple and you’ll find plenty here to love. Signalis offers a wide variety of puzzles that are rarely, if ever, repeated. Making for a diverse selection of brainteasers to occupy yourself with. Everything from classic fuse box and water tank puzzles to more complex radio frequency or code-breaking puzzles are here.

While you’ll also spend a fair amount of time hunting for various keys to unlock certain doors with – only to find even more keys – you’ll also engage in self-contained puzzle-solving. Picking a lock, arranging a tarot-card table, or discerning key codes based on different personnel files is only some of what you’ll be doing in Signalis.

The game is as much about puzzle-solving as it is about horror. Paired with its excellent and unique approach to storytelling, even gamers who don’t typically enjoy horror games will find something to love here. If Signalis is the only survival horror game you play this year, you’ll get a great taste of what the genre is capable of when in hands of passionate, out-of-the-box-thinking developers.

The Best and the Worst of the Survival Horror Genre

Given that Signalis belongs in the survival horror through and through, it also features some nuances associated with the genre. Elster has an inventory that is limited to six items. Because weapons, healing items, and utility equipment like a flashlight take up precious space, you’ll spend a lot of time going back and forth between your storage box and the latest item you’ve discovered. This can be frustrating because there are so many useful weapons, gadgets, and ammo that you’ll discover but inevitably have to leave behind due to a lack of inventory space.

While the game justifies this limitation with in-game lore about personal belongings and security checkpoints not allowing individuals to move around the facility with more than six items, it’s still a somewhat unnecessary limitation. An elegant solution would be to, for example, separate the general items inventory from the puzzle inventory so that the two don’t slow down the pace of your exploration as much as they do.

Despite that, there is very little to complain about in Signalis, gameplay-wise. Whatever systems were put in place – such as the ability to combine inventory items to make better healing supplies or new puzzle solutions – work wonderfully. There are no bugs here to speak of – the game runs well and plays well which is to be expected given its visual design choices.

Presentation – An Ode to the PS1 Era

The most distinct element of Signalis lies in its visual presentation. While the game may appear pixelated at a glance, it’s actually a form of intentional pixelation of 3D elements. This helps the game create a retro atmosphere without being limited by pixel art in what it’s trying to convey.

Signalis looks and feels like a 90s horror game but it also takes full advantage of modern video game design solutions developed since then. You’ll experience its story through an isometric point of view while adopting a first-person perspective during certain story moments. This makes for a balanced experience that will never grow mundane.

Everything from the design of its inventory to its many terminals, computer screens, and Elster’s radio, looks and feels retro. Paired with the Lovecraftian elements you’ll experience throughout its runtime, it makes for a one-of-a-kind experience that you’d only find if you could “play” Paul W.S. Anderson’s Event Horizon. Cutscenes in Signalis are also a mix of pixel art and 3D-pixelated art styles, however, the game does something unique with its visual presentation in this aspect.

Because of certain story-based reasons, the language you’ll play Signalis in, features a mix of English, German, Japanese, and Chinese influences. Most of the information you’ll soak in will be in English. However, world-building through posters, public service announcements, and other elements, are presented in German, Japanese, or Chinese. This can prove troublesome if you want to dive into the game’s world but from the game design standpoint, the choice is more than justified due to the nature of Signalis’ story.

Signalis takes a minimalistic approach to its sound design to complement its PS1-inspired visuals. Moment-to-moment sound effects like gunshots, footsteps and doors opening are designed to evoke the survival horror genre roots. There are no voice-overs here to speak of and the game supplements that with text-based dialogue and the player’s ability to engage with environmental storytelling at their discretion.

While atmospheric sound design is minimalistic, its soundtrack is something special. The game uses melancholic, emotional tunes to heighten your engagement during impactful story moments while using tense and unsettling electronic music during terror-filled moments. Bosses, of which there are precious few, also receive their unique scores, making for frightening fights for survival.

Best of all, the team of two knew exactly when to tune out all of the sounds during “a-ha” moments like entering a room full of dead bodies or during certain first-person memory segments, which reveal shocking story elements. Overall, you’ll feel like you’re playing a PS1-era video game while playing Signalis, in the best possible way.

Final Verdict – Should You Play Signalis?

Signalis is a once-in-a-decade type of project. It is entirely built by two dedicated people who were passionate enough to breathe new life into a genre that slowly but surely became stale over the years. Whether you’re the person who always plays the latest Resident Evil games on day one, or is simply curious about the survival horror genre, give this one a try.

The game will especially hit the right cords with people who love TV shows like Twin Peaks or anime like Ergo Proxy, both of which place a heavy emphasis on their atmosphere. You can beat the game in less than 10 hours, making for a well-paced, atmospheric horror experience that you’ll undoubtedly enjoy.

Signalis is available right now on PC, Nintendo Switch, as well as Xbox and Playstation consoles. It’s also available on Game Pass and the Humble Games Collection, enabling you to experience it on a variety of platforms based on your gaming preferences.