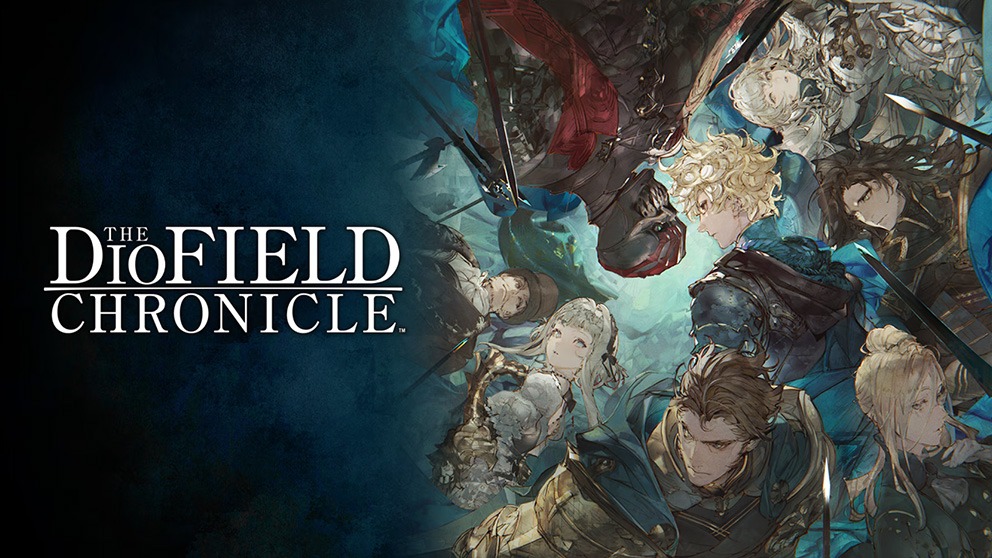 Square Enix has been on something of a roll this year, treating us to a plethora of diverse titles, which have already established themselves as cult classics. Stranger of Paradise: Final Fantasy Origin and Triangle Strategy, as well as upcoming titles like Star Ocean: The Divine Force and Harvestella showcase just how diverse the publisher’s catalog is in 2022 alone.

The DioField Chronicle is Square Enix’s effort to experiment, by mixing the real-time strategy genre with the JRPG elements its usual outings are known for. Announced in March of 2022, and released on September 22nd, The DioField Chronicle is a title developed by SE’s internal development staff in close collaboration with Lancarse. Which is a studio known for their support work on Shin Megami Tensei and Etrian Odyssey titles.

With an intriguing premise, captivating visual style, and the world-renowned composer Ramin Djawadi of Game of Thrones in charge of the game soundtrack, how does The DioField Chronicle hold up?

A Story of War-Time Politics

The DioField Chronicle stands apart from a lot of modern JRPGs with its story. Focused on adult themes of war and its effects on society, the game offers something refreshing to players looking for something out-of-the-box from a Japanese developer. The story takes place on DioField Island, the titular location, which is embroiled in a conflict with two other nations.

DioField Island is rich in Jade, a resource that serves as The DioField Chronicle’s version of mana. The players take control of The Blue Foxes, an elite mercenary unit working for a local duke, when the all-out war breaks out on DioField Island. From there, The Blue Foxes start to build a reputation as the defenders of DioField Island and the only ones capable of preserving the nation’s independence.

A Breath of Fresh Air

The DioField Chronicle’s story is told in the form of a “chronicle” – meaning, major story beats, revelations, and events are covered as illustrated vignettes. It’s not uncommon for several years to pass between missions, which can make it difficult for players to get attached to The Blue Foxes and what drives them. Most of the story’s exposition is reserved for pre-mission briefings, where the characters plan their upcoming battle in the camp war room.

Refreshingly, there is very little here in terms of typical JRPG tropes or character stereotypes – each member of The Blue Fox has grounded, believable motives, beliefs, and character traits. It’s commendable for Square Enix to opt for this approach, as paired with the themes of political intrigue and war, the story works well to justify why the missions themselves are even happening. But, the story itself does come off as a bit basic in the end, with predictable story beats and lukewarm payoffs. In this sense, the story is the glue that holds the gameplay together and it does so commendably.

While the story of The DioField Chronicle is serviceable, it’s the gameplay where the title truly shines. The developers opted to design the game’s combat system around traditional RTS elements and pair them with expected JRPG mechanics. The player controls 4 units, with 4 sub-units assigned to each main unit. You will select 8 characters from a roster of 16, separated into 4 distinct unit types. This allows for a lot of flexibility in terms of party composition depending on the upcoming mission type, character’s levels, and equipment, as well as their available skills.

The characters’ skills are tied to their weapons, allowing you to easily swap out different sets of abilities without any stat redistribution (of which there isn’t any). You will only unlock passive character abilities as you level up your party, enabling you to focus on getting better at managing actual battles instead of playing number games as with traditional JRPGs. Unfortunately, this is where most of the gameplay variety stops, as there is little here in terms of non-linear progression.

The DioField Chronicle features 7 chapters filled with linear missions which have a standard set of objectives that rarely, if ever, change. Despite that, the moment-to-moment gameplay is both mechanically and visually engaging and you’ll never get bored of playing or grinding to unlock new gear or abilities. Different abilities come with various buffs, debuffs, status effects, and other variables which can help you make easy work of any scenario. Likewise, summon abilities akin to Final Fantasy’s summons are available for emergencies or boss fight scenarios where you’ll need extra firepower to come out on top.

An Unfortunate Lack of Replay Value

The DioField Chronicle will take you 30-40 hours to complete depending on how interested you are in its side content. This consists of short missions which you’ll undertake for various members of The Blue Foxes to deepen your relationships with them (and unlock passive abilities for everyone). However, once you’ve seen the credits roll, there’s little incentive for you to start NG+, even though you’ll carry over pretty much everything you’ve unlocked.

NG+ doesn’t differ from the first-time playthrough (at least now, at launch) and is only there as an extra feature that enables you to unlock the achievements you’ve missed on the first playthrough. For some players, this is enough reason to go back and play The DioField Chronicle again, especially since its missions are quick, sweet, and easy to pick up and play in short intervals. PC players however might find the gameplay too simplistic compared to titles like Age of Empires IV which take full advantage of keyboard-and-mouse controls rather than being limited to console gamepads.

Presentation – A Balanced Pairing of Form and Function

One of the most captivating aspects of The DioField Chronicle is its visual presentation. The game’s picturesque illustrations by Isamu Kamikokuryo have stood out to JRPG fans ever since the game’s reveal in March of 2022. Known for his work on Final Fantasy XII and XIII, his character art truly breathes unique life to a game that would otherwise be perceived as a typical strategy game.

The game’s AA budget is clear at first glance, as many of the game’s cutscenes consist of animated illustrations that are paired with the narration of the game’s “chronicles”. This leaves a lot to be desired by the viewer, because huge in-game events such as battles or character deaths are almost exclusively portrayed this way. In-engine cutscenes are used rarely beyond mission briefings or static character dialogue which would lower the workload for animators and allow them to focus their efforts elsewhere.

Overall, however, the game’s visual fidelity, character models, environments, and battle maps feel like they were built and optimized with Nintendo Switch in mind to ensure that the system can maintain a stable frame rate. This is further compounded by the game’s mission structure which will never take you more than 10 minutes per mission to complete, which is ideal for gaming in short bursts or on the go.

The gameplay itself features high-quality character models which move through static 3D spaces, akin to the maps found in the Fire Emblem series. It must be noted that the battles never get too hectic or confusing from the player’s perspective. The visual design team has done a great job at introducing UI elements that constantly give you all the information you need on what’s going on. You will never get confused about who is casting an ability, who is attacking who, or who has the least amount of health.

The game maintains a stable frame rate throughout and doesn’t feature any visual or technical bugs which would break the player’s immersion. Paired with their relatively short length, the battles in The DioField Chronicle never feel like a chore and constantly keep the player’s attention focused on important information such as character positioning, resource management, and the ever-counting mission timer.

The biggest selling point in terms of The DioField Chronicle audio presentation has to be its duo of composers. Ramin Djawadi and Brandon Campbell are known for working in the video game industry for some time now, with the former being the mastermind behind Game of Thrones and Westworld’s soundtracks.

The soundscapes created by Djawadi are evocative of Wars of the Roses, a conflict that took place in England during the 15th century (and was one of the primary inspirations for A Song of Ice and Fire by George R.R. Martin). The pair of composers deftly convey the nature of war, with inspiring tunes meant to evoke courage on the battlefield, only to juxtapose them with mellow tunes which communicate the loss and consequences of war. The game’s soundtrack is more than fitting for its tone and setting, however, it falters a bit in other departments – such as its voiceover.

The DioField Chronicle does something unorthodox with its voiceovers. Whether due to budgetary constraints or through a series of artistic choices, the game’s dialogue isn’t fully voiced. This in itself wouldn’t be an issue if the game simply let the player read the dialogue between the characters at their own pace. However, the developers instead opted to record short remarks, greetings, and social cues in which different characters speak out regardless of what the dialogue is supposed to say. An example:

Dialogue box: “We should move our troops from the gate to the port so no ships can enter the bay.”

The comments don’t land more often than not, being more annoying than they should be since they play every time you progress the dialogue further. Moreover, enemies will often utter repetitive phrases when engaging in combat or dying on the battlefield – of which there are a total of one per enemy type.

The title of this subhead “Long live the Empire!” has already become a meme in The DioField Chronicle community due to how often the players will hear the phrase when dispatching foes. While this may be a mild nitpick, it’s just another concession the developers had to make do with given the game’s AA budget – your mileage may vary. You can swap between the English and the Japanese voiceover in The DioField Chronicle, with the English voiceover being particularly good in terms of British, Scottish, and Irish accents being prominently used.

Final Verdict – Should you Play The DioField Chronicle?

The DioField Chronicle is a competent, elegant hybrid of RTS and JRPG genres. Paired with striking visuals and memorable music, it will keep you coming back for just a few more missions so that you can unlock a new skill or a cool new weapon for your favorite unit.

While it won’t revolutionize the genre or convert new players to become JRPG fans, its target audience will love every minute of it. It is a brisk, engaging game that doesn’t overstay its welcome. If you’re looking for a short tactical RPG experience to sink your teeth into in anticipation of this Fall’s AAA lineup, The DioField Chronicle will more than fill that void for you.

Huge thanks to CD Media for the Review Copy!