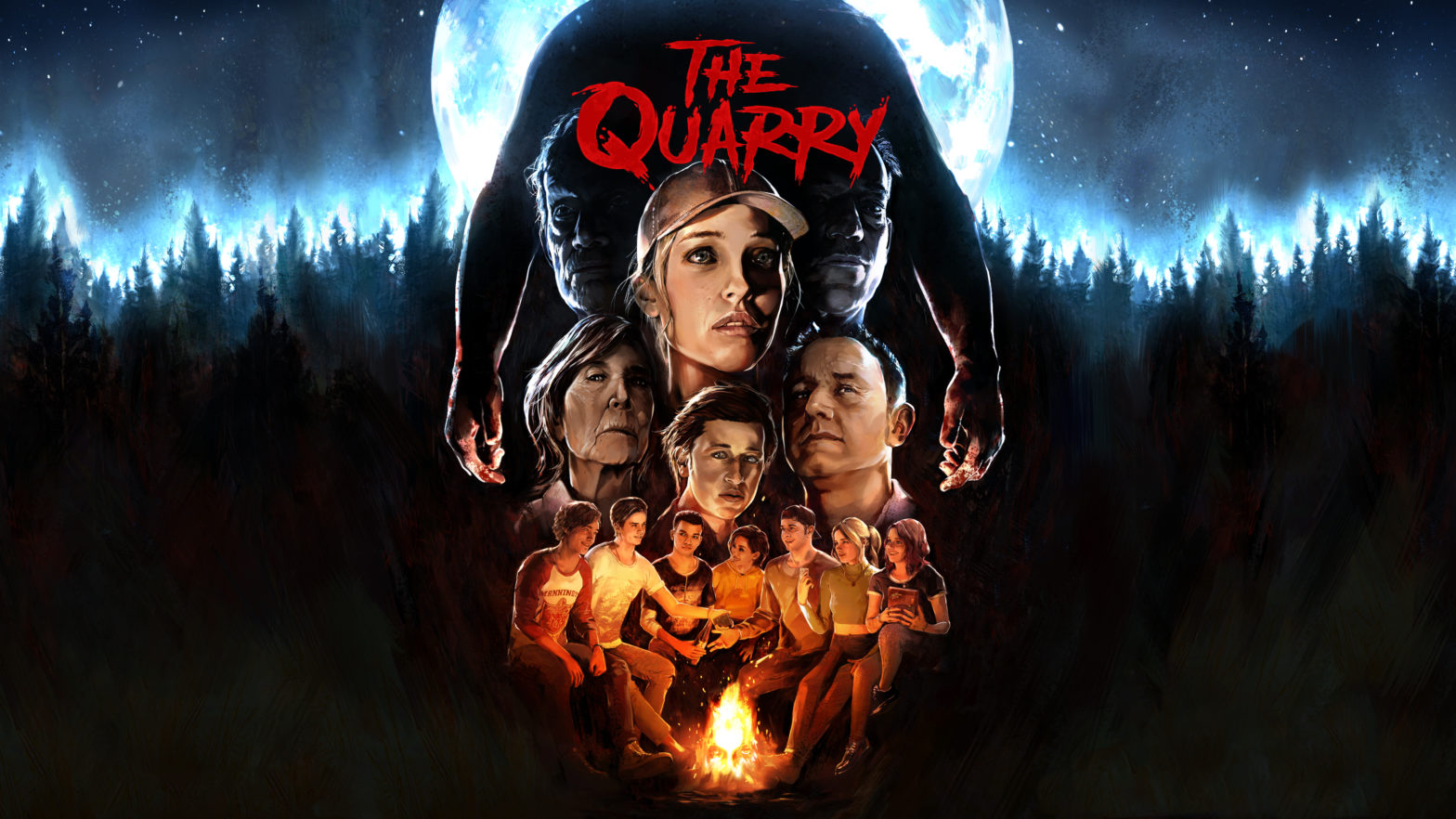 Last month, the opportunity to review not only my first AAA-title but also my first ever horror game, presented itself to me. Although I’m not a huge fan of the horror genre in general, I felt that I would regret passing an opportunity like this. So, after a lot of mid-game pauses to catch my breath, here I am, safe and sound to share my thoughts on Supermassive’s latest teen slasher, The Quarry.

Horror has never had this visual fidelity

Each location (and you’ll visit quite a few throughout The Quarry), is so meticulously crafted, overflowing with atmosphere. From the warm sunlight that spreads through the hundreds of acres of natural brilliance, to the dark and confined forest surrounded by an eerie mist and a sense of unease.

Definitely not for the faint of heart

When it comes to monsters in a horror game, I can say it really got me the first time around. Dreadfully realized and with a new innovative artistic approach that really confused me at first sight. It took me some time to figure out what it was. To be brutally honest, I only figured it out when our characters also found out, so there goes my horror intuition. They were hideous, atrocious and a big improvement from Until Dawn’s antagonist.

The story is about a group of young-adult counselors, in a quarry-based summer camp. The game starts with a prologue chapter that shows two of the counselors arriving a night early only to get an unpleasant reception. The bulk of The Quarry’s plot starts to blossom after we fast-forward to two months later, near the end of summer, when seven other counselors are preparing to leave the camp, including the head counselor and owner of the camp.

A series of minor inconveniences

That’s when the first of many inconveniences take place, with their minibus not starting and them realising that they’ll have to spend yet another night at the camp. Despite the owner’s instructions to stay inside until the morning before he suspiciously disappears into the night, teens will be teens. So, they decide to throw one last party at the lake before they go on with their lives. But this is a classic horror flick scenario, and obviously, someone or something is watching them through the forest.

After the departure of the camp’s owner, the group splits into smaller ones, each on different duties while you switch constantly from one to the other. Completing tasks while also discovering evidence as well as various collectibles, like tarot cards, will help you unravel the plot. The Quarry takes its sweet time introducing the characters that you’ll be trying to save or kill, keeping in mind that it goes on for roughly 8 – 9 hours of gameplay on a single playthrough.

Any decisions made at any point in the game can have detrimental consequences later on. There were times when ‘duties’ never seemed to end while the plot felt that it never picked up the pace after that point, until near the end. Whenever the phrase “Path Chosen” appeared on screen, I was inquisitive about how this simple choice would turn out later on. These moments of interest and terror built the tension up and later on, the game offers plenty of references to said moments and choices, which was captivating.

The characters of The Quarry vary from the generic jock with a fraction of emotional depth, to the shy artsy type. I felt like guiding people through conversations to introduce their backstories and help them unravel each of their personalities. Though, as the possibility of mortal danger became more and more frequent, traits of their personalities started becoming more and more apparent. The hidden insecurities of the ‘douchebag jock’ is a perfect example. While protectors of the group were forced to become the more self-absorbed ones. All of these characters were also joined by a small group of NPC’s, whose fates can be affected by your decisions throughout the game, delivering some extra zest.

Tracing Until Dawn’s path in the sand

The only experience I’ve had with The Quarry’s spiritual predecessors was through various YouTube playthroughs. Thus, a comparison between them wouldn’t have enough merit coming from me. But from what I could tell, the basic core formula of Until Dawn is still at play here. The Quarry is meant to be its spiritual successor after all. The basic formula though is amplified in certain ways that made the characters feel a bit more “human”.

Not for the faint of heart

The Quarry is a somewhat interactive story, controlled by split-second decisions, Quick Time Events (QTEs), button-mashing moments, and the occasional exploring in the dark. All of which can easily be fiddled with in the accessibility settings menu. These mechanics may seem like binary decisions on the surface, but there may be more paths to choose from without realising it in the heat of the moment.

The QTEs are pretty easy and hard to miss, which took the challenge out of it but replaced it with a feeling of comfort every time one popped up since I already knew I would succeed. They always have the same timing and only use the four main movement directions. Exploring, on the other hand, feels polished. The movement of the controllable characters seems less clunky than its Until Dawn or even The House of Ashes equivalent. However, there were still moments, especially in indoor locations, when the camera and the player movement failed me.

Thus the majority of The Quarry’s outcomes rest entirely on these 50/50 split-second decisions. Run or hide, agree or disagree, be polite or insulting, shoot or hold fire. All the deaths I’ve experienced in my playthrough happened on occasions like these, either by poor judgment or coin-flip outcomes that went wrong. Which left me feeling a bit sour, but it also made the characters’ deaths rather memorable.

Another game mechanic is the breathing one, where you have to hold your breath until the danger blows over. By just pressing and holding a button, this mechanic replaced the “keep your controller steady” from Until Dawn, which ultimately made it way easier for people (myself included) who might want a more couch gaming/movie-watching hybrid experience. It gets more suspenseful with the added timer of how long you can hold your breath, making you second guess if you pressed the button a bit too early.

Or watch through it as a horror movie

On the off-hand, if you don’t feel like taking any kind of choices, and just want to enjoy the cinematic part of The Quarry, then that’s where Movie Mode comes into play. You are being presented with the opportunity to choose if everyone lives or dies, but you can also tune the personality stats of each of the characters to have a more personalized experience. There’s also a two-player couch co-op.

Despite that these quality-of-life improvements are embraced, some more wouldn’t hurt. Being able to select a chapter and seeing how different paths would play out is possible, but your decisions don’t carry over when you jump to the next one. Making Trophy hunting an even more time-consuming hustle. The cherry on top of that hustle comes when you realize that there is no way to skip any of the cutscenes. Making me think replaying the game can be a total chore. Then again, if you do have the patience to match your curiosity, you’re in for a treat.

A final and also new feature that was introduced with The Quarry was the Death Rewind option. The player is given three opportunities to save any character in case they find themselves mauled to death for example. Each rewind goes back to the most crucial decision that would’ve otherwise killed a playable character. However, some characters’ fortunes were sealed by choices you made hours ago meaning you won’t be jumping very far back. This feature is available only after you have completed the game once, or from the start if you buy the Deluxe Edition.

As I progressed through the story, the gameplay started taking over more. But most of the first half consisted of exceptional and strong voice acting with the star-studded cast of Brenda Song, David Arquette, Ariel Winter, and more. This made the characters of The Quarry genuinely likable in their own way. So not wanting to get attached to some of them was tricky. This ultimately happened with all of the characters, a worthy mentioning achievement for an almost entirely character-driven horror game.

Coupling that with the well-made foley sound effects and awesome licensed soundtrack made my gameplay even more suspenseful and scarier.

After finishing The Quarry’s gameplay while having spent roughly 8 hours, as I sat there listening to the epilogue, I realized that I couldn’t have asked for a better introduction to the horror games genre. I really had appreciated The Quarry’s inconsistent ride by the time it concluded. With a slow-burn plot that you can steer to some potential rewarding (or anticlimactic) conclusions, it has a great script performed by a fantastic cast accompanied by amazingly good graphics.

Rather than bombarding you with jump scares like Until Dawn, The Quarry focuses on gradually developing a tense environment in order to make the consequences of your decisions sting. I enjoyed the collection element, in which interconnected clues build and fill in the narrative if you find related pieces, while also always second-guessing whatever was going on. But I inevitably spent the majority of my playing time waiting for things to properly start, just to have them end practically as soon as they did.

Major thanks to Bandai Namco EU for The Quarry review key.