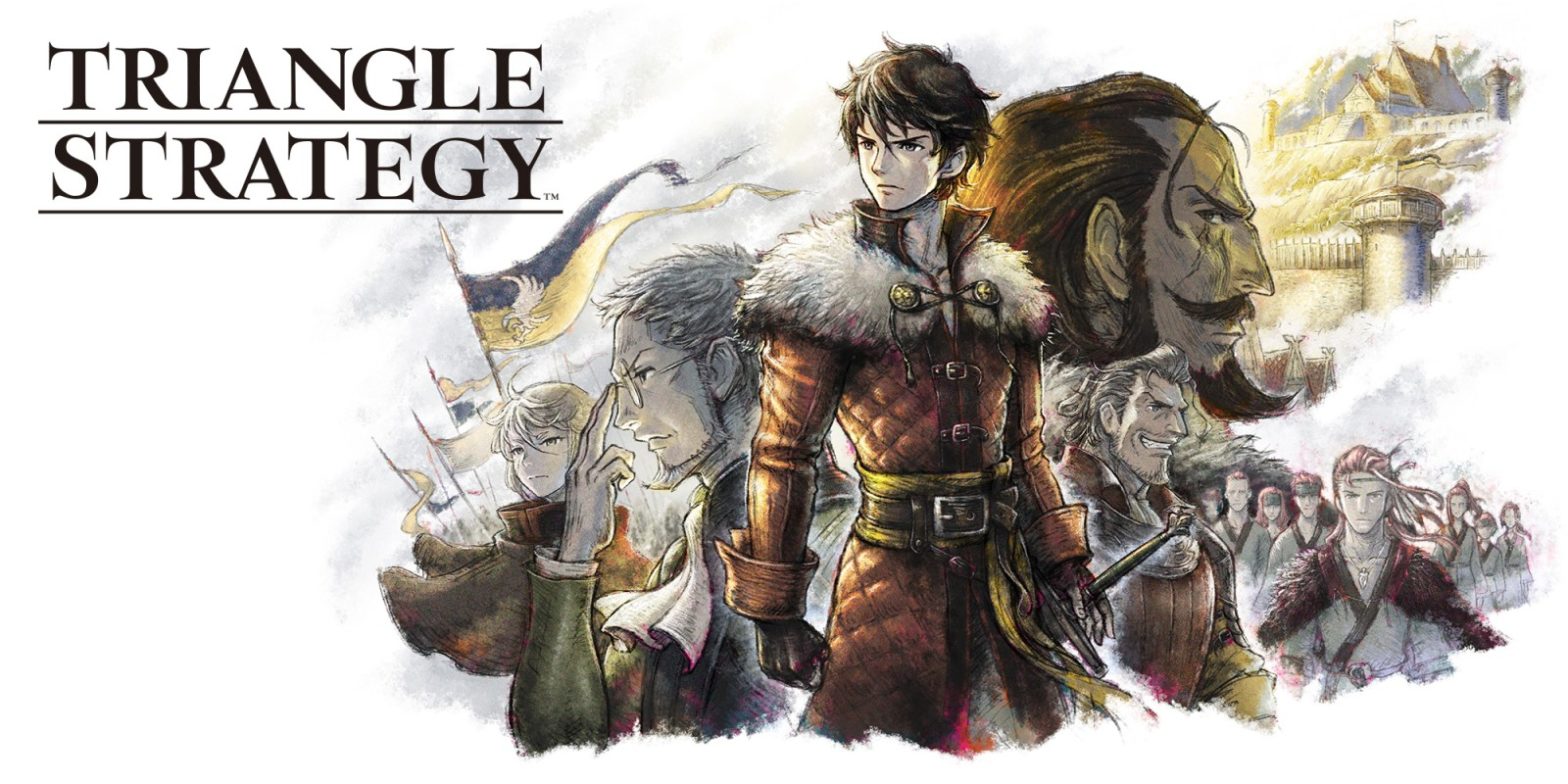 If you are looking for a deep political story of power and betrayal and many hard choices, you are in for a ride.

Triangle Strategy is as much a graphic novel as it is a game. In between battles, there are lengthy cutscenes or conversations that build the world and expand on the characters. There are titbits of information you can pick up to learn more about the history of Norzelia and deepen your understanding of the factions.

The problem is simply the pacing in Triangle Strategy. The strategic combat is superb, but sometimes absent as you plough through conversations. Its main issue is pacing and sometimes pushing the Nintendo Switch to its limit that results in stutters or lag.

Once upon a time in the great Norzelia – Story

Triangle Strategy has a deep, fleshed out lore that deepens as you progress through the story. It builds upon the previous conflict in Norzelia, the “Saltiron War”. A war waged over the scarce resources Salt and Iron, as the title of the war entails. The three countries of Glenbrook, Aesfrost and Hyzante waged war over the distribution of the precious minerals. Norzelia is torn, and peace balancing on the thinnest of threads keeps the continent from falling into total war once more.

The young men of the Saltiron War are now old, strong leaders. Their offspring are ready to take the mantle of leadership of the continent. Near the borders of Aesfrost and Glenbrook a grand vein of iron ore is found. A collaborative initiative is created to run the mine in collaboration with the other nations. Miners from Aesfrost and Glenbrook overseen by Dagan the inventor of explosives and youngest son in the Aesfrost line under Gustadolph. Eager to prove himself to his father and earn his title at the court.

Aesfrost does not award titles according to lineage, but more based on the deeds a person achieves in his lifetime. Thus, Dagan is eager to make the Grand Norzelian mine work and broker forth a long-lasting peace between all three countries. Where iron is shared equally and traded against the salt, which Hyzante has a monopoly over.

Serenoa of house Wolfort, is due to be wed to Frederica as a political wedding to enforce the peace between Aesfrost and Glenbrook. He befriends Dagan on the celebratory feast for the opening of the Grand Norzelian mine. Their goals aligned for peace under the rule of the young leaders of Aesfrost, Glenbrook and Hyzante.

The plot thickens and blood flows

The lore and dialogue in Triangle Strategy goes way deeper than I will explain here. For the Triangle Strategy review I started noting down the specifics of what was going on, it just became too much, and I was noting more stuff on my notepad than actually playing. All the aforementioned story is a summary of the first few hours that you also see in the demo. So I’m keeping it spoiler free beyond the demo version.

Dagan discovers something while blowing up some bedrock in the mine. Suddenly the lure of power overtakes him, and he goes behind the back of Serenoa, who is overseeing the progression of the mine. He informs his father of his -to us unbeknownst- discovery, and vies for a more powerful seat at the court of Aesfrost.

Political intrigue is nothing if nobody is getting betrayed, and of course this is what happens. Some story points are really predictable. If you read the lore, keep up with the events that happen over the map and watch the cutscenes you will not end up surprised by some betrayals.

Triangle Strategy feels like reading a novel at times

The story is so thick that it sometimes felt like watching a film or reading a medieval novel full of betrayal, choices, politics and the struggles of young lords and ladies. I dare say I got bored at some points as it went on just for a bit too long.

Eventually, I just wanted to fight. Not discuss the consequences of people not enjoying salt on their food. The pacing is really off, and I sometimes struggled to find the will to continue on for another set of 4 dialogue markers on the map. Knowing that if you wanted to make a good decision, you might as well read them.

The beginning hours also have so much build-up and background building for the continent and characters, it just feels a bit longer than it actually is. Triangle Strategy really gets the ball rolling at chapter four and beyond, but getting there was not that fun. While it really picks up after that chapter, it also slows down suddenly, losing momentum and my attention.

If Triangle Strategy wasn’t backed by such amazing combat and re-playability options? I would definitely score it a lot less. The strategic combat is simply sublime, if the AI doesn’t bug out. While working on this Triangle Strategy review, I spent most my time in dialogue and not in the glorious strategic battles it offers.

Having strategy in its name, Triangle Strategy makes that part 100% true. These are some of the more strategic battles I have played since Fire Emblem: Three Houses. It reminded me of Divinity 2 by Larian Studios at times when I was freezing tiles or using lightning and water to spark more enemies. From your simple positioning to the direction you face, everything is important, and the AI will punish you if you don’t pay attention.

While this is not everyone’s cup of tea, the difficulty ramps up perfectly. Starting out with some simple basic units in your own roster and the enemies. To more complex characters that utilize traps, items and become hybrid melee healers or buffers. As your roster becomes more varied, so do the enemies.

Like backstabbing and follow-up attacks are something not uncommon in the political debates in Norzelia and our own world. This also rings true for the combat in Triangle Strategy. Positioning your units for a backstab or follow-up attack from a teammate are the keys to victory.

A punishing AI, if it wants to

At certain maps or areas, the A.I. can become a bit stupid. Simply walking around or skipping turns until a certain condition is met. And with condition, I mean, you are moving close enough for the AI to figure out what it has to do. Once you notice this, you can exploit the hell out of it and chip down the enemies on the field one by one.

Furthermore, the camera was one of my greatest annoyances. Figuring out where the back is, or certain heights, was a chore. Can a unit make a ranged line towards that unit and shoot from that square? Most was trial and error, and luckily the system doesn’t lock out a character after everything in its turn is done. Like they knew people would make a movement action only to discover that a certain height was hard to discern; and that character can now no longer attack.

Another gameplay aspect is that of choice and conviction system. It’s never fully explained what changes in Serenoa’s convictions, but you do get a prompt saying something changed. My guess is that it works up to the golden ending. The perfect sequence of choices that will give you the best and true ending.

Like most Japanese RPGs, Triangle Strategy has several endings. And for your first playthrough I would not worry about your choices. Choose what feels right with the information you have. After finishing the story, you can start a New Game + and take a totally different route as your first playthrough.

Certain points of the story are debate sections where your party is torn between a choice that will drive the main story on. Your job as Serenoa is to try and convince them of your choice. Eventually everyone weighs in their choice on the scales of conviction and the story follows the majority of the votes. Convincing your allies is harder than it seems. Certain dialogue options aren’t available unless you find the correct note or talk with an NPC about a certain topic.

In between battles and main story dialogue or choices, you will be able to freely explore certain maps. Some of these are just a teaser for the map of an upcoming battle, with NPC’s to talk to and gather info for your notes. Some have vendors that sometimes sell a rare item you need for upgrading one of your followers.

And on other times things will go down in your encampment. Your encampment is your hub for upgrading your units, doing training battles and improving the class of a unit. Sometimes you will get a prompt for a new dialogue that usually ends up with the recruiting of a new unit for your roster.

The encampment is also accessible before each battle, so you can upgrade, buy, sell and equip as you see fit for the upcoming battle.

All the prompts you get on the world, the green ones. Are simply stories playing in a different location. The insights of another lord of one of the three houses of Glenbrook. An audience at the court of Aesfrost as they discuss the invasion of Glenbrook. And I think these slow down the pacing of Triangle Strategy significantly. But you need them in order to make your choices.

While Triangle Strategy doesn’t put a huge drain on your battery, it does suffer from stuttering, lag and pretty slow loading times.

First off, you are going through a lot of menus to set up your party. Switching out items or going to the encampment and upgrading a unit. Starting up a mock battle to grind out some exp or items at the tavern. All of these steps require one or more menus to navigate through. Coming and going to the encampment hits you with a loading screen every time. It breaks the pacing once more and makes management a chore instead of something you do quickly for a battle.

Secondly, some maps really took a toll on the frames. For a certain battle, if you make certain choices before, you will have the option to use traps that burn oil. Activating creates a solid 15-20fps until the fire is done burning. Overall, the effects look amazing and good enough for a 2D pixel game, but I found the whole game had a bloom effect that I generally don’t like in any game.

Triangle Strategy is a really solid classical strategy RPG that just suffers from a terrible case of bad pacing. It’s certain to please the fans in the already small niche of strategy RPGs that are on the market. But it won’t convince any new players to dive into the genre.

While it offers an insane amount of bang for your buck due to re-playability with new game + and harder modes. You have to be a fan of the genre and possess the ability to withstand the slower parts of  Triangle Strategy.