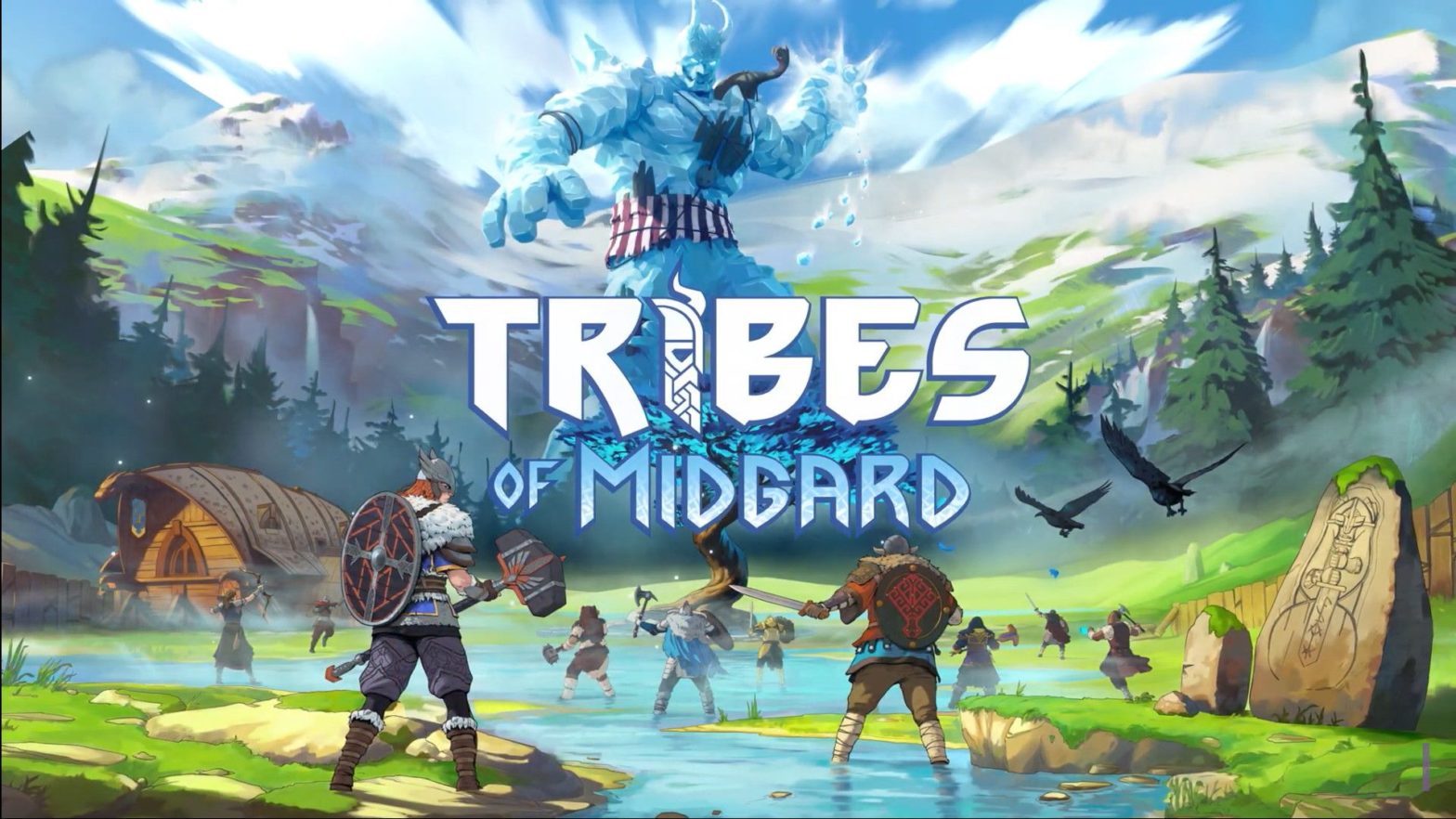 Norwegian mythology, survival, roguelike, action, rpg. No, it’s not a shopping list, but, essentially, what constitutes the Tribes of Midgard. The game was developed by Norsfell Games, published by Gearbox Publishing and is available for PC, PS4 and PS5. But starting with the basics, anything that contains elements of Norwegian mythology is always interesting, as it has many beautiful features. Regardless of whether it is quite a popular and well executed item. But because even a beautiful mythology must be applied perfectly, let’s see what this title has in store for us and what it has not achieved.

Yggdrasil is the tree of life in Norwegian mythology. In Tribes of Midgard you are invited to choose one of the 8 heroes that have come from Valhalla. The heroes have different abilities and their purpose is to defend Yggdrasil and thus prevent Ragnarok (Day of Judgment).

The tree gets attacked every night and its biggest enemies are the Jotuns. The Jotuns, as they appear in the game, are the ones who want to destroy the Tree of Life. Some giants come with different elemental powers. Practically, as part of Gameplay they have mostly huge hp and slow but powerful attacks. It is important to deal with them before they reach the village.

The story has a very important role to fulfill, as it simply builds the form of a game. Here it’s rather simple and interesting, but without much analysis of the lore, unfortunately.

A very beautiful representation with bright colors that do not disagree with each other. The game in general appearance has its own aesthetics that suit it well. Surprisingly, its design does not make it disagree with the theoretically violent theme of Vikings and Survival. In fact, the bright colors with the Zelda-like setup and gameplay beautifully enrich the extensive Gameplay, supporting it perfectly.

In terms of effects, there is practically nothing incredibly magical, but it does not lose its touch anywhere. No flash or quick action looks tedious. They give the player the necessary information about the action taking place.

More on the subject of effects that give the necessary information, while there are several points where there is enough, nothing is excessive. Getting used to the UI makes everything easier, obviously. Especially at the beginning of Tribes Of Midgard, which is quite an important part of the game. Information about enemies, life points, skills and all together the battle can make a player lose interest. Here however, the well-thought-out design ensures that this does not happen.

The characters are very well made, with good elements about them. While the main character has a basic human design, without of course anything special, his armor is excellently designed and invests the player very well. The NPC’s in turn have also been designed superbly, especially the stronger ones that have more special features.

Relatively few things to mention in this area. The music is quite on the subject and right where it should emphasize the battle and where not. Of course, I can not say that I heard something that caught my interest other than music and effects that just fit the content. Practically, for “Tribes Of Midgard” I might have expected something more interesting or dynamic to bring out this mysterious Norwegian element.

There is a lot of variety in the subject of effects, as there are many things that happen or can happen. Hits, steps, casting time, spells and a million more that tie together and have quite good quality.

The atmosphere changes when the player’s village is under attack, which is an attractive theme in the Audio Design. It invests players with the appropriate music, without changing anything in the effects. But the themes you hear are very different from those throughout the rest of the game.

Perhaps the most important part of the game. As mentioned above the gameplay is very similar to Zelda. A map to explore with the player running and weighing whatever he finds. Exploration and weapons. Enemies can be different, from animals that serve as resources to magicians, monsters, etc. Each enemy has its own characteristics and obviously, as the game progresses, different and stronger attacks. The repeated pattern is a classic feature of these games, so be patient and think quick.

The Survival element in Tribes of Midgard is also combined with the RPG building element. Players can relatively easily collect materials to make tools, weapons, and especially structures in the village. At the same time, in the morning the player gathers materials to build the village and defend it at night. Among the things that need to be collected are the Souls. Essentially, it is the currency and the main factor that strengthens the village, and consequently, the player.

Through Souls, NPCs level up, thus providing items of a higher level. In addition, the more you put in Yggdrasil, the higher the level of life pool gets. Souls also are dropped by the Jotuns, which appear on the map and must be exterminated before reaching the village, as they intend to destroy Yggdrasil. And keep in mind, they also give the largest amount of Souls.

And here somewhere the RPG elements appear. The quests are quite simple and easy to understand. Practically, there is nothing complicated. Quick travels in exploring the map are extremely useful, as at night you have to go back and kill whatever is attacking the village. Building the village in turn is quite important, as it should be in the Survival element, with the player having to build to survive the next waves

Regarding the characters, things are standard and regard a different play style per player. All classes can be upgraded through challenges etc. Depending on the gameplay, there is obviously the corresponding fighter, rogue, caster etc. among the heroes who defend Yggdrasil. Personally, I would like a little more difference between Sessions, as the player does not start with anything other than skills, if he has invested time in a Class.

Next, the different modes are what make the difference in the game, and there are two. They all start with the Saga mode, that survives day by day. Supplies, building, leveling and all the elements of the game. On the other hand, Survival allows a customization before the game starts. There are seasonal variations that bring different monsters. As the years go by, the monsters become even stronger. Practically, unlike Saga, Survival has no end, except when the player fails and Ragnarok comes.

Finally, I did not see any bugs. It is worth mentioning that the developers have announced that additional elements will be added, either in terms of content or multiplayer co-op element. The game does not support cross-play at the moment, but it will in the future.

This is a fairly simple game and very straightforward. This does not necessarily mean that it is a good thing or a bad thing. Mostly it’s just … that. Personally, it does not seem to me as a negative element. Instead, it structures the game simply and makes it easy to concentrate on its main feature which is the Gameplay. Of course, I found some things that bothered me significantly.

The waves of enemies were quite regular, to the point that I found them tedious. At some point, the value of the level-up didn’t matter anymore. While the survival element is aimed at grinding and survival tactics, constantly counting the day and enemies, the game potentially aimed at the proper management of time. Therefor, the main goal is to catch up.

Also, it is deemed necessary for the game to be played co-op. Ideally, if not necessarily, with close friends, instead of the classic multiplayer between strangers. At this point I would like to mention that there is no split-screen or local co-op in general. Up to 10 players can play in the same story and move on, but the solo needs a lot of improvement. Personally, I consider it an important feature, because it would be quite interesting to enrich the content rather than having a list of things to do.

Very good Design and perfect setup in general. I would prefer the game to have more elements, so as not to reduce the range of its audience. In all of this, Tribes Of Midgard has a lot of potential for lovers of aesthetics and the Survival element and is a worthy choice for the monetary value it has at the moment. Certainly, if the player likes the game, several hours will be devoted to it. The game is simply cool.

Many thanks to CDMedia for providing the review copy we used!