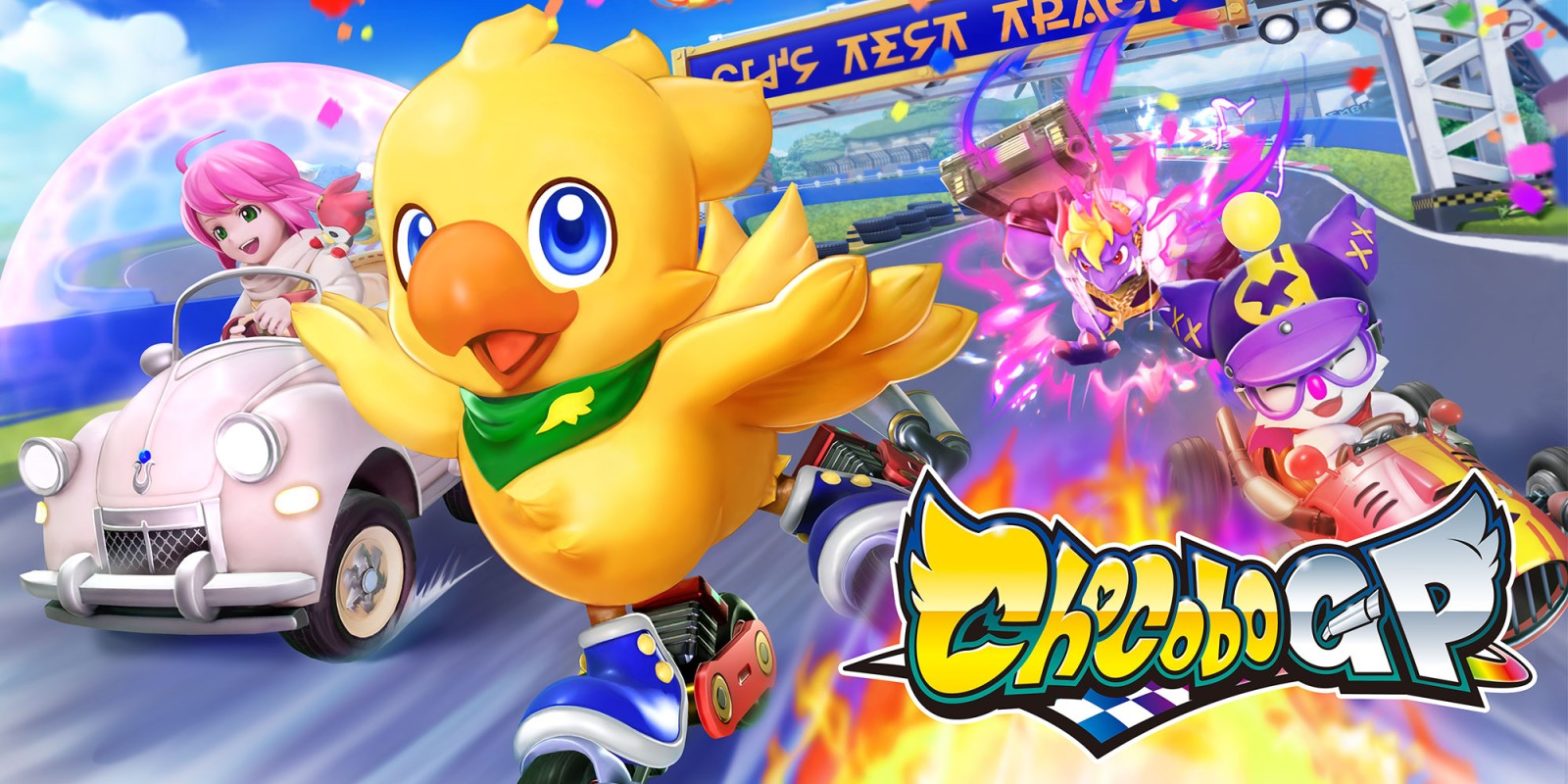 Chocobo GP by Square Enix has arrived on the Nintendo Switch, with both a Lite and Full version to choose between. It’s a karting experience with beloved characters from the Chocobo and Final Fantasy series. With a plethora of different game modes to decide from, the most notable is the Chocobo GP mode. But the season model leaves a foul taste in many racer’s mouths. Let’s have a closer look at both versions and whether they offer what you’re looking for.

TLDR;
Chocobo GP offers by no means a bad racing experience, but I can’t shake the feeling that this would serve better as a mobile game.
Thanks to CDMedia for providing us with a review key.

It’s impossible to talk about a karting game on a Nintendo system and not immediately think of the iconic Mario Kart. Its success is well-known (and well-earned) and has inspired the development of Chocobo Racing, which was released in 1999 for the PlayStation. Although it received mixed reviews, mainly due to poor graphics and controls, it has earned a place in the hearts of many Final Fantasy fans. It’s simply fun to see your beloved characters in a completely different and light-hearted setting, such as a racing game.

A sequel was first announced in 2010 for the Nintendo 3DS, but it was quietly cancelled as it went through development hell. Now, the sequel Chocobo GP is finally here to celebrate the Final Fantasy series’ 35th anniversary.

The available characters come with their own vehicles and special ability, but you can customize appearances after you’ve unlocked them. After choosing a racer, you of course try to finish the race before the other players. Each race usually consists of three laps around the same track. By making smart use of drifts, you can boost your speed to get ahead of the others. There are also items for you to pick up. These “Magic eggs” are there to either help you or hinder the others. On top of that, you’ll also charge up your personal ability that you can activate for another boost in an attempt to win the race.

These “Magic Eggs” work quite differently from items in e.g. Mario Kart. They come in three varieties: The copper egg grants one random magicite, the silver one upgrades a magicite you already have, and the gold one grants two of the same magicite. You can choose to use a magicite immediately, or you can save them and make the attack more effective by gathering up to three of the same kind. Another interesting thing about magicites is that sometimes other racers can benefit from them as well. One of the magicites e.g. lets you open up a portal and teleport a bit further down the track. As long as the portal is active, other racers can also travel through it. However, if you’re unlucky, you can also travel through the second portal and teleport backwards.

The Lite version of Chocobo GP lets you play the story prologue and Chocobo GP mode. You also get access to three of the playable characters. If you know someone who owns the full version of the game, you can join them for a local multiplayer race. If you’re only interested in the GP mode, you technically don’t need to pay for the full version. However, since every character has their own stats and special abilities, and you only have access to three of them, you’ll have a hard time competing against others who have unlocked more powerful characters. I think the Lite version is great to get a feel of the game and how the racing works, and you should treat it as a demo version.

This mode is a classic tournament mode. You get to play against other racers online in up to four races. This is definitely the main focus of this game and offers the most fun experience. The tournament begins when 64 players have been found and are divided into groups of eight, who will race against each other. Each top four will then continue to the next round.

This is where the season model comes into play. By competing in the tournament, you will level up and make progress on the reward track. The free track rewards you with coins and stickers, while the paid track throws in characters, rides and customization options. This season, the character Cloud, which you unlock at level 60, serves as the main motivator. You receive enough in-game currency to buy the prize pass, but hiding one of Final Fantasy’s main characters in a paid season pass is… an interesting choice. On top of that, if you own the full version of the game you can purchase a premium pass, which immediately bumps you up to level 60. The track goes all the way to level 200, but given the slow progress, I doubt many people will claim the final reward.

You can upgrade your Lite version to the full version of Chocobo GP in the Nintendo e-shop for 50 euros. Let’s take a look at what you get in return.

The prologue, which is also available in the Lite mode, serves as a tutorial to how the racing works. Chocobo and his friends want to enter a racing tournament with the ultimate prize for the winner. They get to make one wish, and it will be granted; anything the heart desires! The story consists of nine chapters, where Chocobo and his friends travel to different locations. At every chapter, they meet new people and have to overcome an issue, like a dispute. Of course, all disputes can be settled by a race and that is what you’ll do in every episode. The condition to continue to the next piece of story is that you have to place before a certain character. Completing a chapter will unlock characters for you in the shop, which you can then buy with in-game currency to use in other game modes, like the online multiplayer.

Don’t expect much from the story, as it’s simply there to introduce each playable character to you, together with their unique ability. You’ll also get to know the different track’s bit by bit and learn more about the available magicites. The “cut-scenes” in between the races are fully voiced though, but the animation is very minimal. The story, dialogue and soundtrack seem to come straight out of a show on Disney junior. It’s both cute and annoying.

After you’ve unlocked all the tracks in story mode, you can try your hand at Time attack. In this mode, you have to complete three laps and time how long it takes you to finish. You can try to beat your personal best. There’s also the option to race against your own ghost data, or even download another player’s ghost data and race against them.

The Series are similar to the Cups we know from Mario Kart. Choose a series and complete four races in total. You’ll receive a trophy if you place third or higher, but the ultimate goal is of course to place first. This game mode offers local multiplayer, but only up to two players.

The first series is the Goblin Series consisting of four tracks, you’ll unlock a new track after you’ve completed it. You need to complete each series in order to unlock the next one. Ultimately, you’ll unlock four more tracks this way. There are currently eight tracks available in Chocobo GP:

About half of them are very short and offer nothing interesting in terms of alternative routes. The only ones I liked were the Gold Saucer and Interdimensional Rift.

The name says it all: a mode where you get to set the rules of your race. You can also play this mode in local multiplayer with up to two players. You can determine the class (speed), whether and which magicites are available, difficulty of the CPU, the number of races and the courses.

While Chocobo GP offers a fun 64-player tournament mode, the game looks and feels like it belongs on mobile. Upon starting the game, you get the classic prompt reminding you to participate in the active season. There are daily and weekly challenges for you to try and complete, and three different in-game currencies to spend in the different shops. Luckily, only one of those currencies translates into IRL money, but it’s still not something people are used to getting in a full price game on the Nintendo Switch. The free version only really exists to get enough players for the tournament mode, but if you’re set on not spending any money, you’ll have a rough time with a limited set of playable characters.

Currently, only eight racing tracks are available, of which most are very uninspired. Making you feel like you’re not getting your money’s worth. Square already promised they’ll be adding new tracks after this season ends, but that doesn’t make up for the lack of content right now. Chocobo GP is different enough from its main competitor thanks to the use of magicites and abilities to attract players, but it’s not offering them what they paid for due to the lack of content. On top of the microtransactions that are available, it’s very grindy to earn the other in-game currencies. All of this just feels like it belongs on mobile as a free to play game, with the potential to earn more love and recognition from a different audience.