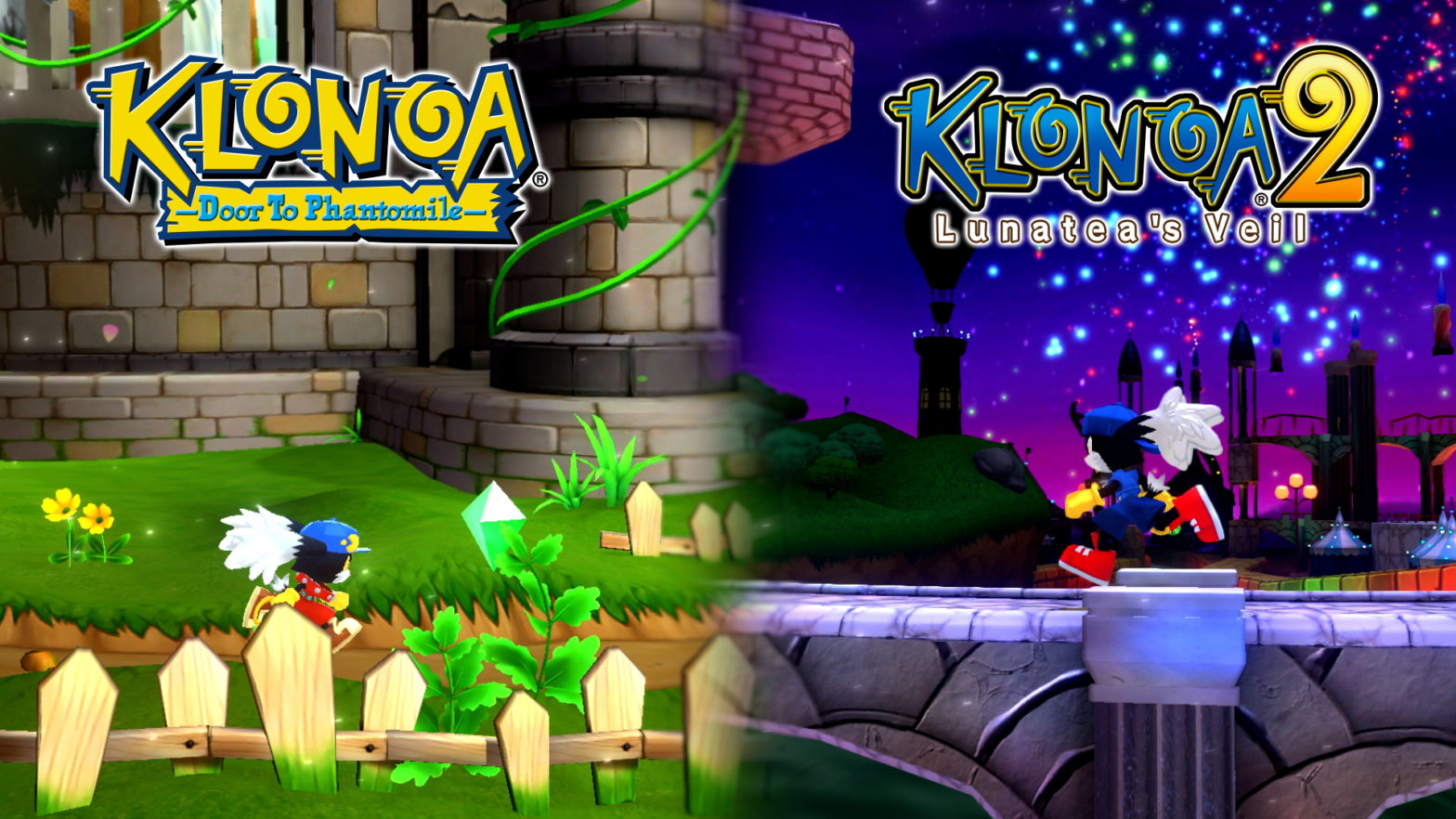 Klonoa Phantasy Reverie Series by game developer Monkey Craft arrived on all platforms recently. Publisher Bandai Namco is celebrating the franchise’s 25th anniversary with this video game compilation. It contains remasters of both Klonoa: Door to Phantomile and Klonoa 2: Lunatea’s Veil. Want to find out if this platformer suits your taste? Let’s jump puzzle right in!

Klonoa Phantasy Reverie Series: the who & the what

As with most remasters I have had the privilege to review, I have no clue what it’s about. I like to blame that on my age rather than ignorance, but I’m only fooling myself. Anyway, don’t really know what Klonoa is either or need a refresher? I’ll give a short introduction of the series and what’s included in this compilation, with a spoiler-free summary of the storylines too.

Namco created the Klonoa franchise in 1997 with Klonoa: Door to Phantomile for the Playstation. This game was received positively, being praised for the successful combination of 2D gameplay with 3D visuals. Klonoa was also seen as a possible gaming mascot for (Bandai) Namco. This game got a first remake for the Nintendo Wii in 2008. The second title was actually Klonoa: Moonlight Museum for the Wonderswan, a handheld device, in 1999. This one only got a release in Japan, but it did set a new design standard for new Klonoa games.

In 2001 we then got Klonoa 2: Lunatea’s Veil for the Playstation 2, followed by three games for the Game Boy Advance. Klonoa: Empire of Dreams (2001), Klonoa 2: Dream Champ Tournament (2002) and the Japan-only Klonoa Heroes: Denetsu no Star Medal (2002). In 2002 we also saw Klonoa Beach Volleyball for the PlayStation.

As a character, Klonoa made an appearance in several other games by Namco. He’s also the star of a manga by the name of Shippuu Tengoku Kaze no Klonoa. Although he appears quite differently than in the games, with a clumsier character and a less serious setting. Apart from that, there was also a webcomic series, Klonoa: Dream Traveller of Noctis Sol, which ended unresolved after two seasons. An anime film adaptation event entered pre-production, but was cancelled.

Although the games always received positive reviews, commercially they weren’t a huge success. And now we get both home console games as remasters for the Nintendo Switch, a platform where they could do well IMO.

Klonoa looks like a mix between a dog, a cat and maybe even throw in a rabbit. He was designed by Yoshihiko Arai, who paid special attention to Klonoa’s silhouette and eyes to create a character that is both easy on the eyes and the memory. Aside from his long ears, his most notable features are his collar and blue hat, which features a design of Pac-Man. (Bandai Namco’s true mascot…).

Although his age isn’t revealed, Klonoa appears childlike. He’s a “Dream Traveller”, someone who travels to places where he is needed. The state of dreams is in danger, and it’s up to him to save these worlds. He is young, good-hearted and a bit naive, but most importantly he never gives up. Against all odds, he will persevere and save the day.

Phantomile is a land built by dreams. Klonoa has been dreaming about an airship crashing into a mountain, and one day it actually does. Together with his ring spirit (his weapon so to say) “Huepow” he investigates the crash. They find the dark spirit Ghadius, who’s looking for a moon pendant. It would turn Phantomile from a dream world into a nightmare world. Klonoa runs to his grandfather for help, who of course knows nothing and tells him to ask his wife.

They appear to not be living together, so Klonoa has to travel all the way to his grandmother. Who tells him, that of freaking course, the pendant is simply in grandfather’s house. I now understand why they’re living apart, poor grandmother. Anyway, Ghadius’ henchman Joka has been stalking Klonoa and tries to get to the pendant first. The story is spread over 6 visions, each taking up two levels and ending in a boss fight.

The second game, which is not a sequel in terms of story, takes place in Lunatea. In a dream, Klonoa gets asked for help, then falls into water. Sky pirates Leorina and Tat (a cat) want to take his ring, but priestess-in-training Lolo and her sidekick Popka come to the rescue. They say they have to meet with the High Priestess, who promptly promotes Lolo to priestess (convenient). They’ve been tasked with finding elements from giant bells all over the kingdom. But the sky pirates from earlier of course get in their way.

When Klonoa and company catch up with them, Leorina says she’ll make everyone experience sorrow with her powers. But she screws up and curses herself instead. Klonoa, who’s too kind really, saves her, and she ultimately decides to help him in return. But that’s not the end of their sorrows!

After playing both games included in this compilation, it becomes clear why they have been bundled together. Although there is no continuation storywise, the gameplay in the second title builds on everything you’ve got the hang of in the first. For that reason alone, I highly recommend you play them in that order. I’ll go over the most notable gameplay elements of the first title, and then over everything that the second title adds to that. Know that in their core these games offer the same mechanics.

This remake adds something I’m eternally grateful for: easy mode. Older (platform) games are hard, there’s no denying that, so the introduction of an easy mode is a very welcome one. You get infinite lives and a little more health, both of which aren’t luxuries. Another new feature is local co-op mode, but don’t get your hopes up. A second player can only boost your jumps from time to time, which might help out a bit, but it’s not enough to keep your couch buddy entertained for five hours.

The graphics and overall performance have also improved. I played the game on my 2017 Nintendo Switch, and it ran very well. Visually, both titles looked good, to the point I didn’t feel like I was playing an “old” game. Especially the second title with its much richer environment didn’t feel out of place in 2022. It’s worth mentioning that Door to Phantomile is an upgrade of the Wii version and not the original PS1 version, something nostalgia buffs might be disappointed by.

Klonoa is essentially a 2D side-scroller, but in a 3D environment. The game is divided into visions, most of which consist of two levels and then end with a boss fight. In every level there is a set number of people to rescue, but they work a bit like secrets in that you often have to go out of your way to find them or even replay the level as you aren’t able to always go back to where you came from. An example would be gliding down a river relatively speedy and spotting one of these secrets too late. On top of that, you can collect gems and break eggs if you want to, but know that storywise it’s sufficient to just reach the end of the level and defeat the boss.

Klonoa doesn’t throw fists or use weapons. He does however hold a special ring. With it, he can send off gusts of air or puff up an enemy and sort of link it to his ring. You can then use that enemy to solve puzzles and get to the next platform. That’s actually what you will be doing most of the time. You can use them to double jump to reach higher platforms. You can also “shoot” them at other enemies or objects. Doing so will “kill” it though. But if you need an enemy to solve the puzzle to reach the next stage, it will almost instantly respawn. So no worries there. Some trickier puzzles involve using an enemy to double jump, catch the next enemy mid-air and double jump again to reach a very high platform.

Needless to say, there’s a lot of jumping going on. In my case, that also means there’s a lot of falling into oblivion. There’s no autosave; you have to actually reach and activate save points. The difficulty of the puzzles definitely builds up as you keep playing the game, adding new types of enemies, such as ones that detonate or carry a shield. It also adds elements onto puzzles you’ve seen before. The game’s not easy, but I managed to play it all the way through, so I promise you can too if you have just a little patience and perseverance. And maybe also play on easy mode.

Something I don’t recall seeing before, are instructions on how to defeat a boss in game. But that’s exactly what you get after the cut-scene at the start of the fight finishes playing. You get detailed instructions on how to defeat the boss in each of its stages. I assume this was included due to the difficulty of the game if you’re trying to beat it on normal mode with very limited respawns. The boss fights were generally not even half as challenging as some jumping puzzles, but a lot more fun IMO. They’re well-designed and unique every time around.

The brief tutorial in the first vision is completely irrelevant, as Klonoa 2 works exactly the same as the first one. And the developers took advantage of this by adding new elements on top of mechanics you already learned and got the hang of in the first game. There are some new enemy types, among which Jetimos that you hold on to and will fly you up high into the sky. Or Likuries, that change colour every time you hit them. You then use these to throw at crystals of a certain colour in order to smash them and clear your path.

But also in actual level design, Klonoa 2 managed to surprise me. There’s a whole level where you surf on the water, and the camera perspective changes several times. Top-down, facing the camera and over the shoulder. There’s also a sequence where you go back to a level you’ve already cleared, but this time around you’re getting chased by a big baddie. And you need to jump from platform to jump pad to jump pad to enemy to platform. GLHF! If you hesitate, the baddie catches up with you almost immediately.

The overall world design has received an interesting upgrade, together with general visuals. The backgrounds have become alive, with actually moving elements or even short scenes playing out. Such as a bomb falling into and destroying some building. The amusement park themed levels were by far my favourite, with a shout-out to the haunted house inspired design.

The amusement park is also home to Momett House. Here you can fight against previously defeated bosses in time attack mode, view unlocked pictures and listen to music. Once you’ve collected enough dolls (aka the secrets in this title), you’ll even unlock new stages such as the Chamber o’ Fun and the Chamber o’ Horrors. In this remastered edition, you can also rewatch cut-scenes.

Klonoa Phantasy Reverie Series is a compilation of two challenging yet charming 2D/3D platform games. Although my skin itches at the thought of solving jump puzzles, I played through both titles included in this anniversary edition with a smile on my face. It was hard, but it was fun. The mechanics, even though the game is obviously old, feel refreshing. The way you need to use enemies instead of fight them, tickled my brain in all the right places. The story is subpar, the enemies are hella cute and I still don’t know what breed Klonoa is. But I do highly recommend you give it a try yourself.