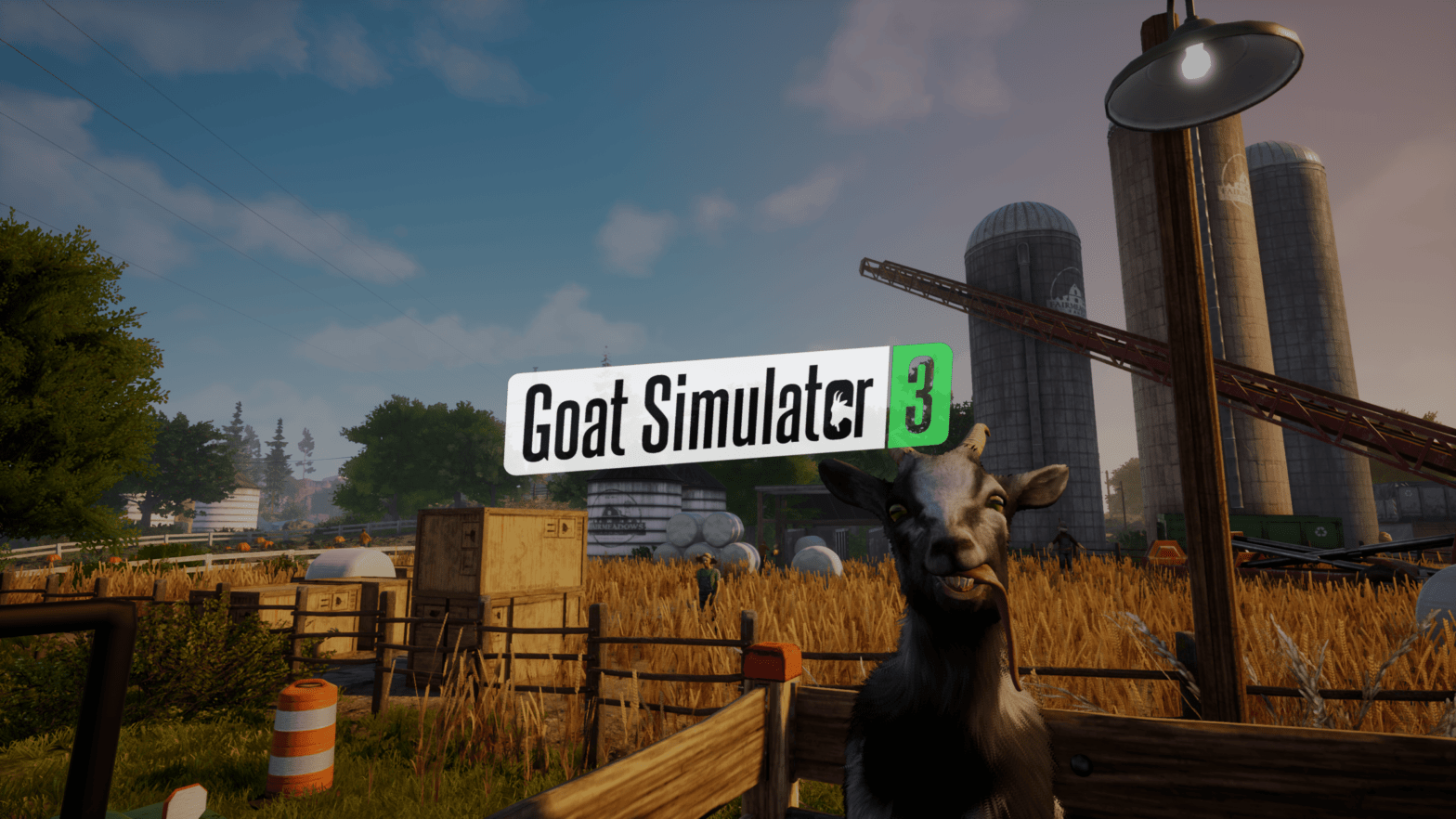 Goat Simulator 3 builds upon the success and formula the first game brought. It’s simple chaotic fun with physics and goats. And it’s true to the simulator part as well. My brother used to own a goat that was a complete asshole, headbutting at random and trying to eat whatever he could get his teeth on. So when you go around and create total rampage with up to four players, yes, I understand a group of smarter goats would totally do just that.

Goat Simulator 3 has up to four player co-op online and local. I truly miss local co-op in this modern age of gaming, but Goat Simulator 3 did run worse when we tested it with only two players. Furthermore, there are some technical issues related to performance; stutters and clipping through the map were frequent in the pre-release build I had for this Goat Simulator 3 Xbox Series X review.

Gather round the Goat Tower

You play the same protagonist known as Pilgor, a female goat up to no good and famous for her adventures in Goat Simulator. The intro kicks off with a direct spin off on the famous Skyrim intro that has been meme-ed into oblivion. Setting up any expectations for the rest of the game.

Basically this farmer bought you and your (up to three) friends to piggyback on your fame and become wealthy and famous. He puts you in a small field surrounded by a simple wooden fence and a Goat Tower on the small hill. This Goat Tower is the gate to the goat castle and your seat of power.

That’s about as far as Goat Simulator 3 goes when it comes to story. Each challenge and puzzle is a small story in itself. Each zone has its distinct flair and “quests” that are just small challenges but fit within the aesthetic of the whole area.

The intro with its heavy skyrim influence dialogue and scene really set the bar for the rest of the game. Not only Skyrim is heavily mentioned, but also games like CSGO, Call of Duty, Star Wars, Wolfenstein, and many more. Each with their own goatified item or quest for you to discover and complete.

Do what Goats do, CHAOS

Goat Simulator 3 is a physics driven sandbox where you are free to do what you want to whomever you want. Headbutt cars, people, cyclists, footballs, garbage or fishermen minding their own business. You don’t have to do what Goat Simulator 3 tells you to do, but I advise that you do.

The goal of Goat Simulator is improving your Goat Castle and collecting more items to goof around with. As you complete challenges, quests and instincts you also gain the currency to buy more cosmetics, unlock playable characters and skins for those you have unlocked. Become the unique goat you always wanted to be.

At the start of the game you get a set of challenges called instincts. Basically your goat instincts of stuff that goats usually do. Like headbutting stuff, doing 720’s and grinding on power cables. Normal goat stuff you see. These also function as a sort of tutorial and get complexer as you progress them. It’s a neat way to introduce a tutorial in a sandbox, you aren’t forced to do anything and can discover it all on your own or you can follow your instinct.

Then we have quests and cosmetic challenges. Quests appear on your compass and map as a question mark and are puzzles that unlock more cosmetics.

These cosmetics often have a function like changing the look of a car or growing huge bean stalks. If you equip one of these cosmetics you get an extra cosmetic challenge; that also functions as a small tutorial on how to utilize the item.

The moment the farmer dropped you off his cart all the land now belongs to Pilgor the goat queen. Every building, mountain and powerline is hers to lick and headbutt. And it truly is yours to explore and discover the secrets it holds. Some quests are a marker on your map but others will require some witty thinking and connecting dots to get the hidden completion.

A perfect example is simply walking into a clothing booth. This unlocks the tuxedo body item and a challenge completion that rewards some exp and currency. The islands are littered with these and I frequently simply stumbled upon them.

The cosmetics you unlock can help you immensely when it comes to traversing around the world. The rocket pack and rocket boots make for speedy chaotic traveling while the glider allows you to glide around when you jump from the high ground.

Not only is the world fully playable in local co-op or online multiplayer. They improved upon it, you can both travel to different zones without forcing another player to join you in that area. You still both get a loading screen when playing local co-op, but having more freedom is good.

Goat Simulator 3 features several multiplayer mini games scattered around the map. King of the hill and prop hunt are really fun with the physics Goat Simulator 3 builds on. But prop hunt is simply impossible in local co-op. These games are fun short little bursts of chaos that add a little competition, if you want to.

Make it or break it

A physics driven sandbox has a lot going on in the background. Add in some mechanics to make the city feel more alive; like ambulances arriving to revive fallen citizens or fire trucks to put out fires. This creates even more chaos and can take a toll on your Xbox Series X. During the preview window for this Goat Simulator 3 Xbox Series X review I encountered many stutters, one crash and a weird bug where I got stuck in my inventory. On numerous occasions I clipped through the map or got catapulted above it only to spawn somewhere completely different.

In local co-op the game takes a huge performance drop in the form of fps going down to 30 and even more frequent stutters in intense situations. As HotPrincesGF dropped out the difference was insane on how smooth Goat Simulator suddenly got. I even got to reproduce some stability issues by using the Banana character, performance got worse and worse the longer I played and the only solution was a full reboot of the game.

Goat Simulator 3 is a fun game that had me laughing out loud and when we played in local co-op we had a blast while creating chaos and destruction. Exploring the cleverly built world is a blast and there are up to 350 items to collect, use and customize yourself with. All without micro-transactions. At least from what we saw in the Goat Simulator 3 Xbox Series X review preview window.

Goat Simulator 3 is best enjoyed with friends, it simply adds more to a funny and chaotic game. Sadly it won’t be releasing on Game Pass, although it would really benefit from that. But the purchase price isn’t that steep.

If it was not for the technical and performance issues I had it would definitely score higher. I do hope most of the issues are fixed with a patch prior to or on release.
Thank you Enarxis Dynamic Media for the preview key of this fun and amazing sequel to Goat Simulator.