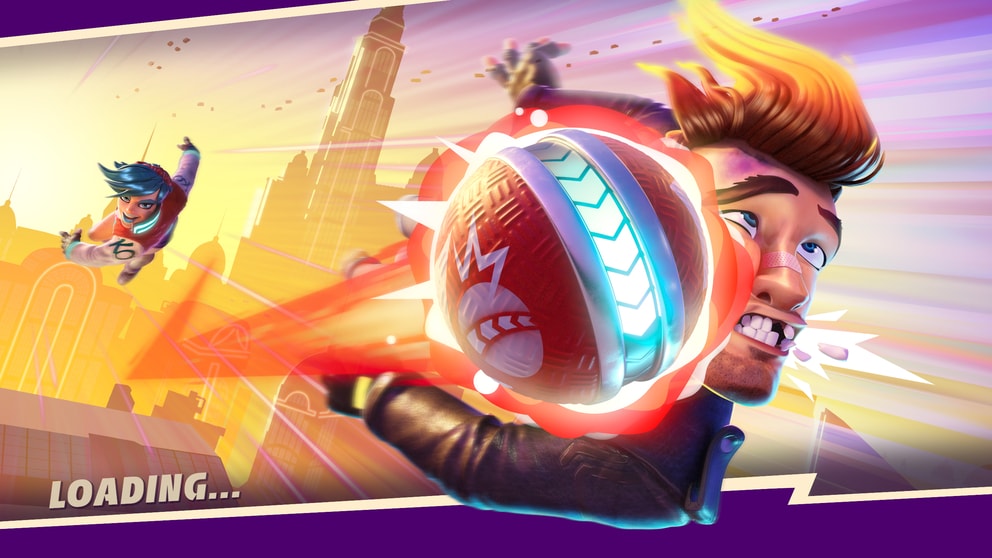 Knockout City preaches easy to play hard to master and holds true to it. It’s so easy to understand the mechanics of Dodgebrawling. But learning the perfect timing and possibilities that all your simple moves bring: that takes skill.

After your first few matches you will already see an improvement in your skills. Your dodges will get better and so will your catches. It happens so naturally and it’s really fun to see yourself pull off curve shots or catch perfect balls that decimate your opponent when you return the ball to sender.

No matter what game mode you will be playing, it’s all dodgebrawl. And dodgebrawl is exactly what its name entices. Dodgeball brawling are intense chaotic dodgeball matches in small arenas with deadly drops and obstacles. They will leave you with an adrenaline rush after a really tight match. Or whooping with joy after you get that last point for the win.

At the time of writing this Knockout City Review the game has six maps. Five were available at launch but with the start of season one the sixth map was added. That’s a bit on the low side and the maps are easy to learn so you don’t need a lot of time to get to know them. Hopefully they will add more, sooner rather than later.

The progression system in Knockout City is called Street Ranks. These ranks increase when you finish matches and contracts that give experience. There is a whole reward track with goodies for you to unlock. All of these unlocks are randomized to a certain point. Some rewards are standard but most cosmetic items are randomized. Also during my review time for this Knockout City review I got to Street Rank 50 without any trouble.

You have one hundred rewards on the first track and nine tracks in total. That’s nine-hundred levels! And all of this for free. No paying season pass that creates FOMO because you will miss out on some goodies. That is a refreshing choice and a good one. Also very surprising knowing that EA is the publisher and they tend to turn their games into casinos.

Casual or Street play is your warm-up for ranked and will be where you spend your first hour to get a hang of the game. Losing has no real downsides aside from less experience for your street rank.

This doesn’t make these matches less intense. Every match we played, aside from one, were all extremely close and well balanced. On multiple occasions we ended up with match point for both teams, getting that last point and claiming victory provides an intense adrenaline rush.

Furthermore the lack of an in-game text chat eliminates any of the toxic content you get from your salty teammates. There is voice chat available within your team, but it’s up to you if you want to engage in that or not. So far nobody engaged in voice chat with me. It makes the game truly casual and allows you to learn from your mistakes.

The driving force of any pvp game, and what determines its lifetime is the competitive mode. Cosmetic unlocks are not something everyone wants to play for (see my Hood: Outlaws and Legends review). If you are a player like me you won’t care much for a new jacket, but getting that next rank in competitive is a whole new level of motivation. A driving force to improve your skills and plays to outplay the opposing team.

I really wanted to wait with the Knockout City review until I dipped my toes in. Knockout City doesn’t bring anything new to ranked play. You do some placement matches and start off in Bronze where you work your way up.

Crews are the clans of Knockout City, for the Knockout City review testing we made a B-Geek crew and did some matches together. If you play with a full crew, your own crew name will appear in the introduction instead of the normal blue or gold team mentions.

There are special crew contracts that you have to complete with a crew to get the exp and the crew specific rewards. All these rewards are customization options for your crew related cosmetics and give a whopping 2000xp.

Having a premade team will be a huge advantage over teams that aren’t. If you can get in discord to coordinate your passes and positioning; well you can dominate a team that doesn’t communicate.

When you play solo though, well, you might get thrown into matches that are on the verge of ending. Even when you play competitive there is a chance that you end up joining a match mid-game. Using the call-outs can help but they are limited to “pass” and “throw me”. You can’t call out if you see anyone going for a flank or hiding behind a pillar.

I would recommend just going into Face-Off when you play solo. An intense 1 vs 1 mode that lets you focus on movement and honing your skills. It’s less chaotic and you can work on your timing for dodging and catching.

Nothing we haven’t seen, it looks a lot like Fortnite. The style on the other hand sticks to the Knockout City fashion. Futuristic fashion and maps that all fit within its setting. A wide array of cosmetics to please everyone and that really make you stand out in style.

Everything is very gender neutral and you have complete freedom to mix and match voices, faces and body types. You won’t spend hours fine tuning the face of your character but there is a great selection of presets and you unlock more as you play.

The DJ introducing the maps and the beats while you play or browse the menus gave me a Jet Set Radio Future vibe. Not as good as Jet Set Radio Future but I found myself unconsciously moving to some of the beats. But the sound of a dodgeball hitting someone smack in the face is just on point. All the special balls have distinct sounds when being shot, picked up or spawned. These stand out just enough in the chaos of the fight that you can react to them.

In Knockout City you have to grab life by the ball and curve it into the face of your opponent. Knockout City is fun, exciting and has a good ranked system to keep you motivated. Also no season pass to scam you into the game and very little monetization aside from buying currency that lets you buy cosmetics.

Knockout City is not my type of game, I like some depth in character creation and making builds that I like. But when I started to play for this Knockout City Review I had genuine fun.

For its price it is definitely worth it if you can get at least one friend to play with. On top of that it’s free on EA-play. EA-play is included in Game Pass Ultimate and I wrote a nice article on how you can save some money on Game Pass Ultimate. Be sure to check out Knockout City if you have any of these subscriptions, you won’t regret it.