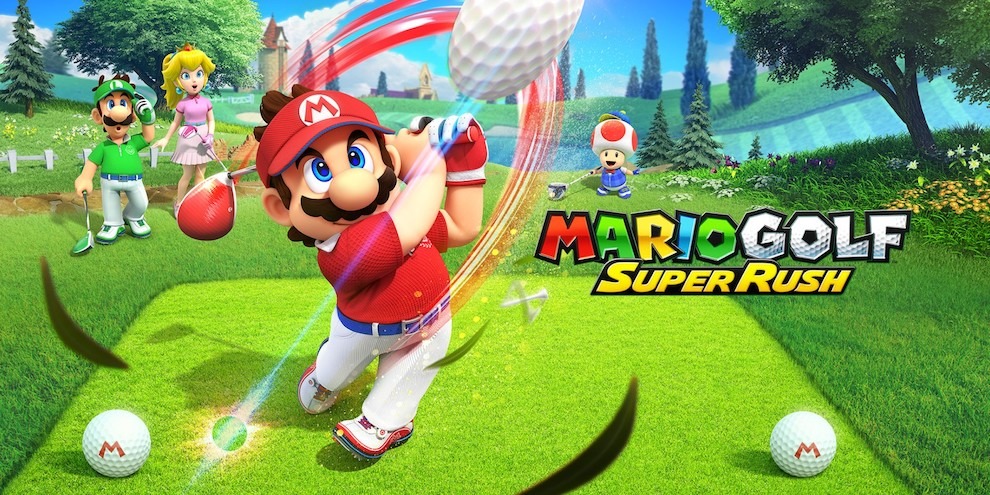 The emptiness E3 left was quickly filled with some new releases. One of them is Mario Golf: Super Rush, which joined the Nintendo Switch family on June 25th. Mario Sports games have always done fairly well, bringing together the classic Nintendo characters and sports like tennis and golf. Adding a fun twist to classic (and frankly otherwise boring) sports. And that is exactly what Super Rush promises, let’s see how it fares.

It’s been a while since Nintendo gave us a new Mario Golf game, so let’s look at its predecessors first. As early as 1987, the Japanese got to play Mario Open Golf (or NES Open Tournament Golf), which was already Nintendo’s second golf video game for the NES. Next in line is Mario Golf on the Nintendo 64 in 1999, which later even got a Game Boy Color version. As we seem to really like golf, Nintendo brought us Mario Golf: Toadstool Tour in 2003 for the GameCube. No more than one year later, Mario Golf: Advance Tour came to the Game Boy Advance. It wasn’t until 2014, which is a way larger gap than between the previous games, the latest title Mario Golf: World Tour was released for the Nintendo 3DS. That being said, some older titles are available on the virtual console.

The premise of Mario Golf: Super Rush is of course to play golf. And you will be doing so with either your Mii character or one of the 16 playable Mushroom Kingdom inhabitants. The game offers a couple of different modes to play; either solo or with friends, both local and online. Special Shots can be enabled, which allow characters to hit the ball unfairly hard and through obstacles. The available characters also have different stats and special abilities, so there’s plenty of replayability in trying them all out.

If you’ve never played a Mario Golf game before, I definitely recommend you start with Golf Adventure. It offers a single player campaign, where you start out as a rookie together with familiar characters and work your way through the different courses. The campaign offers you lessons and possibilities to practise specific skills as you progress and access new areas. Although the campaign is light on actual story, I recommend you take your time to walk around and talk to the NPC’s, as they can offer you a quick laugh in between your golf sessions. It should take 6-10 hours to complete this mode, depending on how quickly you get the hang of golfing.

I personally learned that I royally stink at golf and had to retake almost every single qualifying match to advance. Although this can be disheartening, know that every practice or (failed) attempt will grant you experience points. You can spend these points as you wish, although I found myself assigning them to the specific skills needed for each course. Such as more power to hit the ball further or more speed to complete the course within the time limit. Practice does make perfect in this case, as I noticed myself getting better with every try, not just based on this skill increase. This mode also offers a shop where you can buy better gear to elevate your game even more.

If you’re just looking to play a game of golf, this is where you need to be. You can play against the CPU or with a total of four people locally. You can take turns using the same Joy Con or connect multiple. Two people can play split-screen and take their shots at the same time, or they can take turns. Then the person farthest from the hole shoots first. There’s also an additional Network Play mode available where you can play against others online. Do note that you will need an active Nintendo Switch Online membership to use this feature. Apart from said Network Play, there are three Golf Modes to choose from in Mario Golf: Super Rush.

Standard Golf is golf as we’ve known it to be for years. You can choose between button or motion controls. Motion Controls are infinitely more fun if you’re playing with friends, but if you’re playing solo, I recommend using Button Controls. It’s significantly easier to hit your target and use all the available features, holding two Joy Cons and using the button controls. You get to choose the format you like best: Stroke Play to get the lowest score, or Point Play to get the most holes. There are sixteen different characters + your Mii to choose from and six different courses. You can play either 3, 6, 9 or 18 holes and even choose at which you’d like to start. Additionally, you can change the wind setting and decide whether players can use Special Shots or not.

Mario Golf: Super Rush, as the name suggests, offers more than just regular golf. In Speed Golf, everything from Standard Golf applies, but there are some additional things to take into account. You all play at the same time and have to run to your ball after you hit it. You can choose to go for High Score or Best Time. If you choose High Score, the player who finishes the hole first gets the most points. This mode is pretty fun and a good mix of traditional golf with just a bit of frenzy. You’ll need to avoid the specific hazards every course brings, while making sure you have enough stamina to use special dashes.

If you’re looking for almost none of the traditional golf and all the crazy, Mario Golf: Super Rush brings you the new “Battle Golf” mode. There’s currently only one map available, with nine holes. The goal is to be the first to capture three holes. The tricky part? If someone completes a hole, it disappears. Oh, and obstacles. A lot. Also, other players can get in your way and push you or your ball aside. Battle Golf is a great way to quickly end some friendships. Definitely recommend it!

And finally, Mario Golf: Super Rush also offers the possibility to hone your skills in what’s called “Solo Challenge”. Here you get to choose between Score Attack or Time Attack: respectively getting the highest score or lowest time in 18 holes. You can practice both your button or motion controls, but don’t get the option to play with your Mii character here. It is then again the best place to look at the stats of the 16 playable characters, which can differ greatly. Just like in Mario Kart, matching the right character with the right clubs can give you an advantage. You’ll also notice that some of them have unique Special Shots available.

As someone who doesn’t particularly like to play sports, whether that’s IRL or a video game, I could still have fun with Mario Golf: Super Rush. Whenever a sports game comes too close to the actual sport, I usually lose interest because it requires skills that I don’t have the patience to develop. But then the game adds a nice twist, like we saw in Knockout City, that opens up a realm of possibilities and adds a solid layer of fun. Sprinting across the course and bumping into the other players is something that honestly should be introduced to all golf games from now on.

Nintendo succeeds at offering what you expect of them in the graphical department. That’s no different in Mario Golf: Super Rush. I don’t usually have much to say about the graphics of original Nintendo games because we all know what the standard is, and that Nintendo always delivers just that. If there’s anything worth mentioning, it’s that the supporters could have looked a little better, maybe, but I don’t really care.

A key element to any good Mario game are the earworms. Whether you’re playing a standard game or the campaign, you’re bound to spend a lot of time on the same course or in training. There’s plenty of time for those earworms to crawl into your brain and stay there for the rest of the week. And I’m not even mad about it. It’s Mario music; it can live in my head rent-free for as long as it wants to.

Whether you’re a fan of sports and/or sports games, Mario Golf: Super Rush does offer the classic party fun you get in these types of Mario games. The game offers different modes, allowing people to take their golfing more or less seriously. Single player campaign mode is a perfect start if you have no Mario golfing experience, but it will not give you a head start in the Battle Golf mode. There’s just so much chaos going on; it’s anyone’s game. Together with the possibility to play with motion controls, I think we’ll definitely be playing this with friends. The standard golf currently only offers six courses and in that sense is a bit lacklustre. Although there are 16 different characters to choose from, the replayability is still limited. Overall, Mario Golf: Super Rush is a good game, and we pray that Nintendo will add more courses.

Thanks to CDMedia for making this review possible!