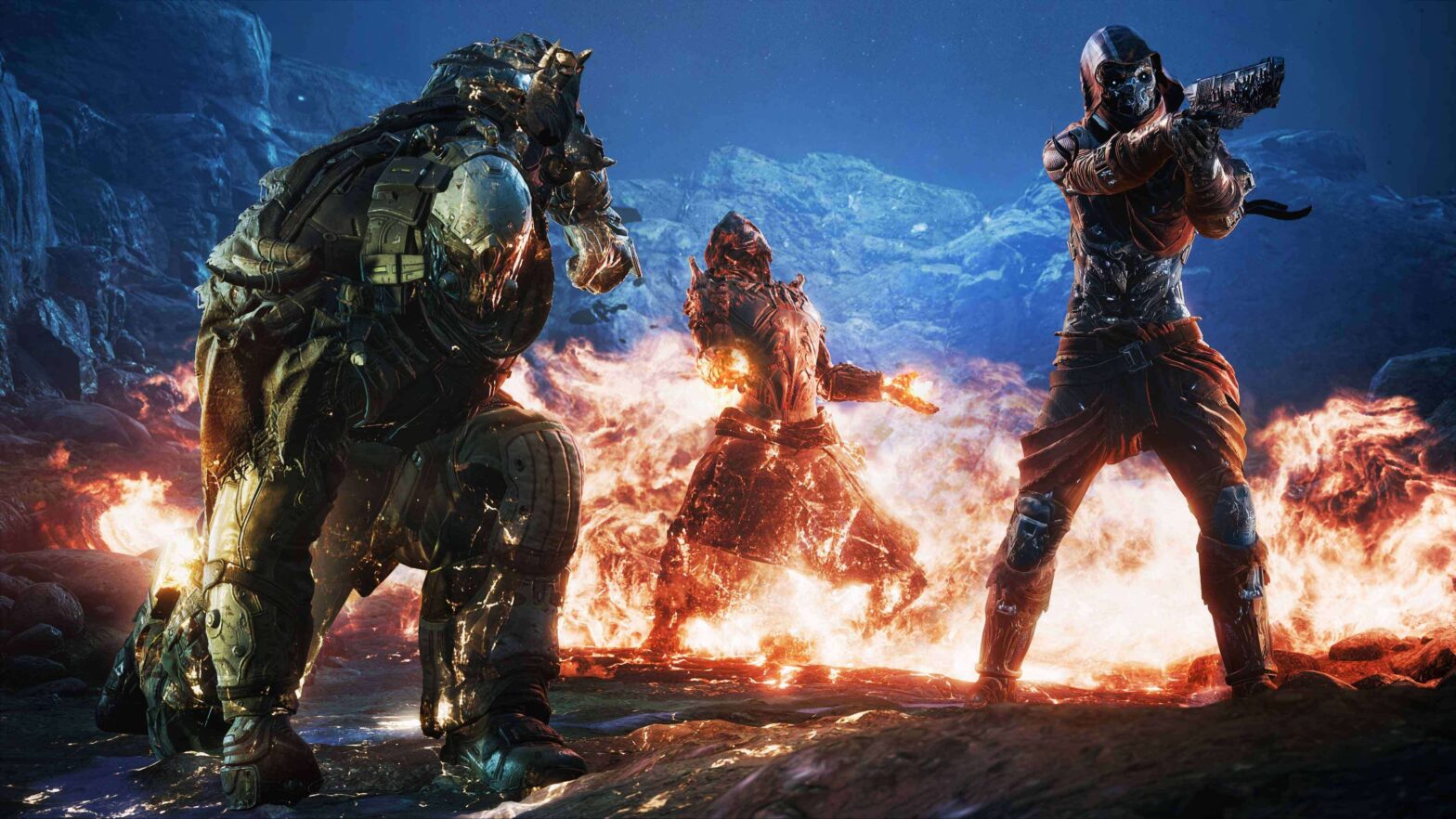 I admit it took a while to get this Outriders endgame review in. Part due to the issues that plagued the game after release. Most of all the fear of losing my progression due to the inventory wipe bug. That has been fixed, so don’t worry about that.

TL;DR
Outriders Endgame consists of replaying old quests for random rewards. Or you take on Expeditions to farm drop pod resources and grow in Challenge Tier. Expeditions are timed and some maps have a King of the Hill segment that has you standing still and defending enemies from a circle. Also, Expeditions are plagued with Elite enemies that can stun-lock you or are outright bullet sponges.
The campaign and levelling process was a lot more fun. Outriders Endgame gets a 6/10.

When the credits roll after the single player campaign, the game is far from over. After beating Yagak, and his escape, drop pods fall from the sky. Littering Enoch with potential resources for the last of humanity to fight over.

You load in at the new location, the outriders camp, where all your vendors are present and with easy access to the expeditions map. You can freely travel to all the discovered locations on Enoch and finish or replay any quests. Grinding for gear or working up to the max World Tier of fifteen.

Expeditions are a new mode that contains the brunt of the Outriders endgame. Basically you take on several new maps to find the drop pods that are located at the end. Thus fighting your way through hordes of enemies to get the resources for the good guys, us.

On top of that they have their own Challenge Tiers, separate from World Tiers. These increase the chance of getting higher quality loot from the drop pods. The tricky part to getting the best loot is not only surviving or clearing the map, but doing it as swiftly and efficiently as possible. Each of these Expeditions comes with a timer, clearing an expedition in a certain amount of time grants you either a gold, silver or bronze medal. Gold giving the highest chance of better loot. It’s very clear, even before starting, how high the chance is of getting a certain rarity. Perfect for choosing your own balance between risk and reward.

Clearing Expeditions on a high Challenge Tier unlocks the next Challenge Tier and so forth. It has you making builds that are efficient, deadly and have enough survivability to wade through hordes of enemies. The mode delivers fourteen maps and some need to be unlocked with drop pod resources; or when you reach a certain Challenge Tier.

But, and it’s a big but. In my single player review, I mention how fun the combat is. How it feels like you’re a wave of destruction raining down on enemies.
Well Expeditions don’t feel like that at all, at least when progressing. Some Expeditions have a part where you need to unlock a door to continue. Being altered, your energy charges a stone that slowly lowers into the ground. Yes that’s right, you have to stand in a circle and protect it. Not only that, but the moment an enemy enters that circle you stop charging the stone. All while the timer keeps on ticking.

“But just kill them faster to lose less time.” Agreed that is what People Can Fly probably had in mind. The waves consist of normal enemies, and a bunch of elites. And they eat bullets for breakfast, diner and lunch; like sponges soaking up bullets. You get what I mean.
Elites come in greater numbers when you play expeditions. Up to the point where you can get stun-locked if you get cornered by six Alpha Perforo. Or when two Brood Mothers put down their big Area-Of-Effect attack on the ground; leaving you with very limited space to move around.

While the Campaign mentions you are a full altered, a god amongst men. The Outrider’s endgame makes you feel weak and sometimes helpless.

Of course, you could always replay quests and increase your World Tier, gather items and perfect your build that way. The rewards are randomized and once you get the hang of it, you can complete these pretty fast. Although some side-missions do require some travelling and don’t guarantee a legendary reward.

After playing for several hours, solo- and multiplayer. I found little joy in running Expeditions. And the disconnects or crashes on Xbox prevented me from playing with friends. I had fun, Outriders was a good experience and I might come back to it when I feel like it. The game is definitely worth getting for the story content and levelling process. But Expeditions need some major changes.

Outriders Endgame gets a 6/10. Due to the issues in expeditions. The contrast and feeling between the Expeditions and non Expedition content is just too much. People Can Fly intended for Expeditions to be the true endgame. But it lacks the fun and god-like feeling you have in the rest of the game.

Check out the review of the Outriders Campaign here: Outriders Review – Altering the Looter-Shooter genre