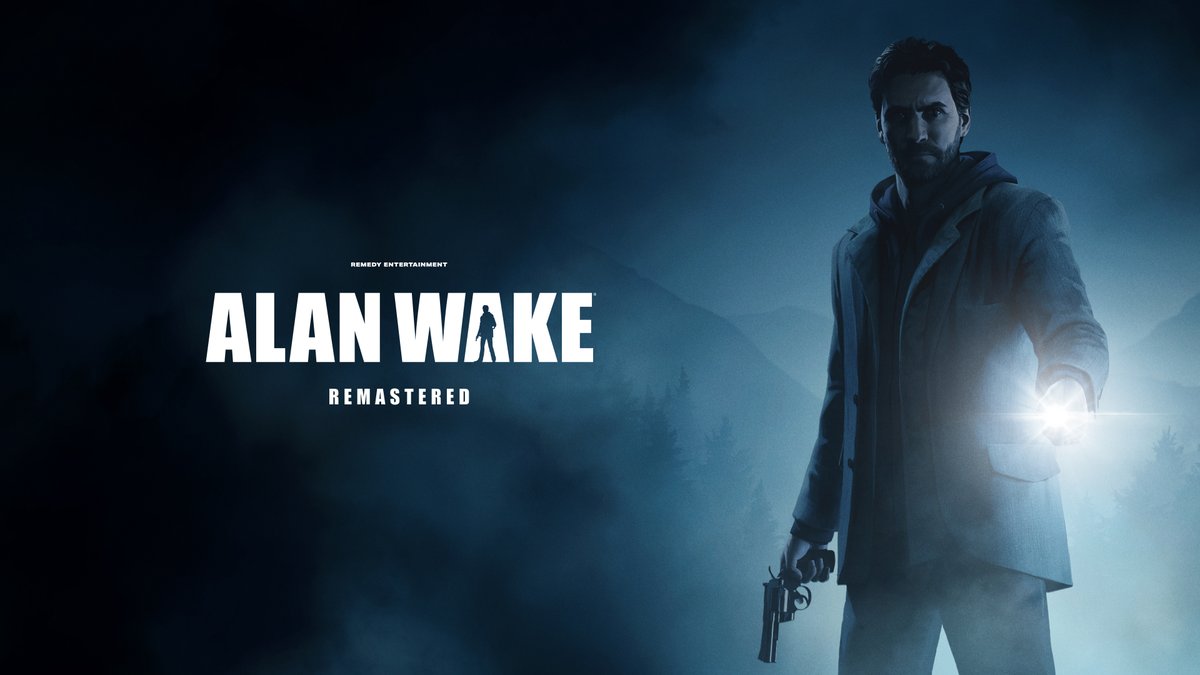 With a lot of old games coming back reworked, Alan Wake Remastered could not be missing. It is one of the titles that even if it is remastered in 10 years, it will again be like a fresh idea that coincides with the present. It manages to keep its interest undiminished. In short, Remedy Entertainment has done a good job. But let’s not go too far and see in more detail what is happening in the game.

The first and most important upgrade that is worth mentioning is the graphical boost, capturing now 60fps in 4K resolution on the PS4 Pro and PS5. Alan Wake has enough and important cinematics that escalate the plot. With the graphics upgrade, the cutscenes took on a new lease of life and the aesthetics of the game were upgraded with Alan surviving all kinds of explosions, shots and all kinds of supernatural, in glorious high resolution.

At this point I would like to refer to something important in relation to the animation that, even in the remastered form, remains constant. In Alan Wake Remastered it should, but also should not be taken into account that it is a game of 2010. Therefore, some expressions or movements are reminiscent of an even older game design. Despite the remaster, the spirit of the original material must be kept intact. On the other hand, in this review, I would like to focus on the game more as a standalone title than as a comparison with the original version. In short, the partly excessive animation did not ruin the mood nor does it spoil the aesthetics of the game.

As part of the graphics composition, which also affects the gameplay, at some points I had difficulty distinguishing enemies. I’m not quite sure if it was by design not to be seen, but I felt more like I was supposed to see them. But I could not.

One of the key features that also contributes to the gameplay is the lighting and what relationship it plays with Alan, the enemies and the evolution of the story. Apart from being a versatile gameplay mechanic, it gives very nice opportunities for the perfect photo setting. Some scenes, as captured through the street lights and the viewing angle, very nicely emphasize the horror element of Alan Wake Remastered.

Starting with the least impressive element, the music did not have a theme that excited me. It changed the dynamic part of the battle where it needed to be. The interactive part of it on the other hand existed and invested the feel properly, depending on the scenes where something special was happening. The classical violins and the blowing of the air that give the creepy element exists. It beautifully framed the scenes that you should just be scared or have this eerie feeling. As also with the simple scenes that did not scare you. Of course, I get scared easily, so even now I hear them…

The sound effects fulfil their purpose to the fullest. They give the feeling they need and enhance the visual material the player receives. In terms of sounds, everything just worked well and nicely. But what really deserves praise is the depth that was given to their spatial planning. They are very well-designed so that when you wear a good headset (shameless plug for a very competitively priced headset) you understand the difference. Breaths next to your ear, speeches from far away that suddenly came near you. Sounds that played with space and therefore with your mind.

In the matter of sound also, the strongest point was the narration and in general, the voice acting. The narration gives a picture of the development of the story and directs the player. From the smallest points like: “I went down the hill” to a lot more specialized things. What I really liked about the story was that it was very justified because of Alan. As a writer (by profession) who plays a big role in the story, it was very nice to hear Alan’s story, as long as we play as Alan, doing things for Alan in a future that Alan has lived but not our Alan and we … If you are confused, do not stress, everything makes sense in the end.

Finally, on the subject of narration, the voice acting seemed a little exaggerated at times but never broke the experience or immersion. As in the original, the story gets you from the beginning, and does not leave you even for a second. The whole set of voice-actors was at a laudable professional level.

Alan Wake is a writer. For the last 2 years, he has been suffering from a lack of inspiration, which prevents him from writing something impressive. So, he and his wife Alice decide to rent a secluded lakeside house somewhere in the Northwest Pacific on American soil… You can see where all this is going! In the introductory part of the game, we discover that there is a mystery in the area of Bright Springs, which our character is called to solve.

The paradoxes start from the beginning of the story, and foreshadow that things are, in fact, quite wrong. A woman in the beginning, who shows that she is somewhat threatening, and a man who asks for something unexpected from Alan: a book that Alan has not yet written but is still in his mind as an idea. Throughout the game, we find on our way various pages from this book, and that is where things start to get tangled up.

A remarkable part of the story that excited me, and I think is the strongest part of the game, is the character’s contact with the dark. First, if we could describe the game in one simple phrase, we would say it is Alan’s decay in the dark. His wife disappears completely unannounced, and the fact that she herself has a phobia of the dark, binds things more and more. It makes you bond with both Alan and his wife, something I personally consider a success for any narrative.

Finally, I loved various references to modern cinema. The crows that provide a big reference to Hitchcock, but also some axe scenes as directed by Kubrick in The Shining: they all reminded me of various scenes that I personally enjoyed as tributes. Apart from the references, however, the whole atmosphere and especially the darkness as an idea has its own role, and contributes to the story as well as to the gameplay. A nice touch that is also worth mentioning is that the plot breaks into chapters, like in a book. So the player plays the parts they have, and you get recaps of what happened in the previous episode. I really liked it as an element that breaks the linear evolution of a story.

In Alan Wake Remastered, the gameplay has a relatively ambiguous character. We have mentioned before the importance of gameplay. Initially there is no levelling up on objects via currency as we have seen in Resident Evil or other games. Such RPG elements are missing from Alan Wake as a whole. You find all the weapons and objects in game and their level goes up as the story progresses. Speaking of objects, your flashlight is your best friend. In general, as mentioned above, light and darkness are the basic mechanics. So, as long as the flashlight has a battery, you can somewhat deal with the supernatural elements that appear on your way. Since the basic idea is that these characters are afraid of light, shining at them with the flashlight can weaken them to shoot them with the pistol.

Commenting further on this interaction with enemy NPCs, there are other items that help the situation. Flares that are quite powerful or flash grenades that have a significant effect, even on Alan, of course. Quite a well-made element of the gameplay. Objects react to the character’s actions such as explosions, street lamps, etc. that can also help your situation. Also, with the flashlight you can find hidden crates that have various boosts, bullets etc. Apart from that, everything else is about the classic 3rd person gameplay that you walk, explore and discover.

Personally, aiming at the bad guys with a flashlight and shooting them is something I find quite amusing. This of course has some issues regarding its evolution. This is practically the problem: there is no development in the field of gameplay. Enemies sometimes become overwhelming, and you just struggle with the flashlight or any other measure. The battery of the lens runs out at regular intervals, so the character changes the battery, or waits to reload, something that in the realism of the gameplay seemed paradoxical to me. And I do not mean the paradoxes that history gives birth to beautifully.

After a while the backdrop with the torch is not as creative as I would like. Alan gets tired. In all the difficulties, the character gets tired of running and several times I got involved to try to escape because the flashlight was low, or the weapon had to be reloaded.

So in a way Alan Wake Remastered may be supported by the 3 difficulties it offers: Easy, Normal, Nightmare. Personally, I would like a story mode that would play more with the atmosphere and the story than with the pistol in against the… beings that we meet. I emphasize that this is the only flaw I found that I do not like throughout the game. But I’m divided on whether it’s really part of the overall game design to show if all this is Alan’s difficulty in dealing with his fears or a general issue that just delays the game.

Except for the only part of the gameplay that bothered me at times, Alan Wake Remastered is really the kind of game we should be seeing more regularly. It is one of the top examples that a mystery and a solid story hold the player and offer him so many things to think and feel. Above all, this is also an example that Horror games do not have to hide behind jump scares and chase railroading. The best and creepiest things in the game were what Alan wrote in his notes.

Alan Wake Remastered at the time of writing costs €29.99, and I think it’s worth it for what it has to offer. Mystery, running, and another mystery that reveals what is happening and progresses the story, only to find some more mystery. Finally, the DLC also has nice additions to the story and deserve a try from those who liked the core part of the game.

We would like to thank AVE TECH for the review unit that we used.