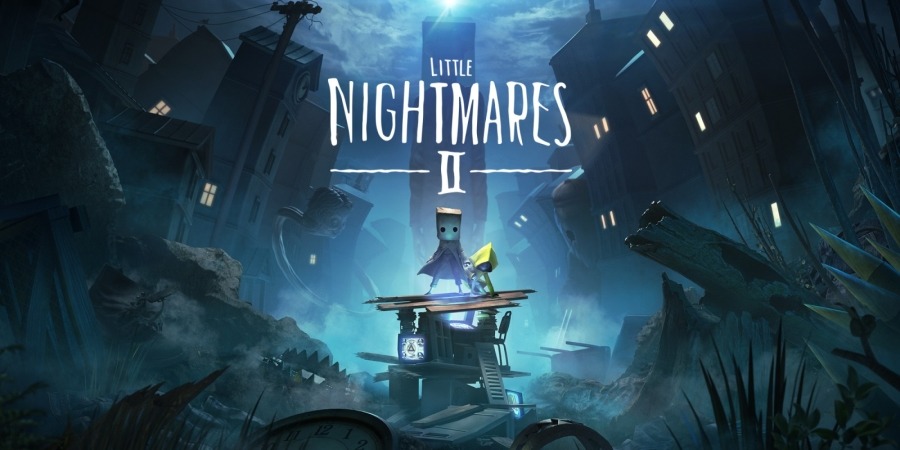 Buy Little Nightmares 2 if you enjoyed the first one, or you’re looking for a somewhat different single-player experience. You like spooks, and haunting visions.
Don’t buy if you are looking for a high octane thrill or fast-paced multiplayer, you will find none.
Overall score: 8/10.

If you’re like me, you’ll find the urge to find a good spooky game from time to to time irresistible. Every once in a while, it’s fun to get whisked of your feet and be guided into something that feels like a fever dream. Little Nightmares 2 fits that bill excellently. You’re mostly unsure if you’re actually awake and playing the game, or just in bed experiencing a lucid dream. It’s a wonderful journey, clearly handcrafted by a team of passionate people; who happen to have a ridiculous amount of creativity. I’ll walk you through the experience a bit in this article so you can decide for yourself if this a good game for you. I’ll keep spoilers to a minimum!
Peeing your pants is entirely optional, however. If you feel like you might need a more light-hearted option, you can also check out our review on Animal Crossing.

The first thing you do when starting a new game is one of the hardest things to do in real life as well. It’s waking up alone, in the middle of a forest, with a paper bag over your head. And definitely no recollection of the previous evening, or even of how you got there.
College days, am I right?

The only difference this time around is that you’re waking up while being a kid again. You can yell some gibberish into the empty void of trees and oppressive darkness around you. But nothing seems to react. You’re limited to mostly going left and right in the scene; although you can even start running a little bit into the back or front. It’s a true 2.5D gaming experience.

While Little Nightmares 2 is decidedly a side-scrolling experience, it does give you a little bit of leeway. The camera zooms in and out, depending on your depth in the scene. It supports the closed-in feel that works great for this kind of game. You also instinctively learn to use this cleverly, by zooming out when you need it. You can sometimes see snippets of the next room or a glimpse of your objective this way. Even more, it feels like the developers had this use in mind specifically for you. It’s small details like these that make you appreciate clever design, and it’s a recurrent theme in Little Nightmares 2.

Facing your fears of trees. And decapitation.

While the game has little in the way of a tutorial or even a story introduction, it’s one of the few times where this suits the game. There’s a few prompts that tell you which buttons to press, basically some information on how to traverse the nightmare. But the rest, you have to figure that out by yourself. That means putting your noggin to work, and figuring out how you’re supposed to proceed most of the time. It’s a minimalist choice; but waking up in a dense forest with body parts and piles of shoes around doesn’t need much explaining. It is a nightmare you’re living after all. The only real choice you have is to keep moving and try to survive the ordeal.

Luckily, you find a friend rather early into the game. It’s another boy, named Six, but one without a paper bag for a hat. He looks tattered and a bit worse for wear. Now, when you use the yelling command, your friend will answer. And you can say hello to each other in gibberish! Even better, you can use the grab button to hold hands! It’s a rather cute and wholesome gesture, but also allows you to drag your friend to where he needs to go. After all, that lever you need while climbing ain’t gonna pull itself.

It’s a good idea to trust your instincts and play through the game in an intuitive manner. You’re feeling the game more than you are playing it. It’s the type of experience that has the potential to resonate on a deep level, if you let it. The game is all about those childish dreams and fears that live in each of us, coming to life. You might find that not every childhood trauma you experienced was resolved all that well.
A dark forest. An empty old creaky house. Getting into all the places you’re not supposed to be, but are far too alluring to be ignored. Dealing with bullies. Being chased by freakish yet vaguely familiar monsters. And getting blasted at with shotgun hail by your old cranky neighbor when he finds you trying to sneak through his farm. No? Just me on that last one?

Encountering unsettling scenes in itself can be fun, but it gets better if you add a layer of puzzling in the mix. This is what I assume the people at Tarsier Studios must have said in their first meeting. And boy, it turns out they are right too. I’ve already touched on the instinctual nature of the game, and this does extend to its puzzling part. Little Nightmares 2 likes to block your path or force to take a scenic route to get where you’re going. And this usually involves pushing stuff, climbing objects, and applying a literal axe to the woodwork.

The game really isn’t all that complex. But if you’re an idiot like myself, you might get stuck from time to time. In hindsight, every solution is so obvious you can’t understand why you didn’t figure it out faster. The best advice I can give you, is not to overthink it too much. If you get the feeling you should be able to go somewhere, you probably can. The developers use clever design here to the game’s benefit as well. If a location is suspiciously lit up by candlelight, or the camera zooms out when entering a new room. It’s basically the game’s way of telling you “go over here dummy, go check that out”. It works remarkable well, and matches perfectly with the raw emotion and intuitiveness of dreams.

A little bonus that real life nightmares don’t have, are some secret paths you can follow. These in turn reward you with… a hat. A hat? Yes indeed, there’s two kinds of collectibles off the beaten path; some nice hats, and glitching ghosts you can devour. While I don’t want to divulge to much information on that last one, it suffices to say that you should definitely be collecting them. If you get them all, you will unlock an extra secret ending scene!
The hats are just for swag purposes though. You do get a little chunk of childlike glee out of it when finding them, so that’s nice.

Currently, Little Nightmares 2 is only available on the older console tech, PC and Stadia. So a PS4 and Xbox One version are available right now. There is also a newer gen version reportedly in the works. These are expected to drop sometime later this year. I myself played the game on the Xbox One version; and I must say it was a mostly flawless experience. I did get some glitchy behavior from time to time though. This mostly manifested itself in the form of floating on furniture climbs like the drawers of a dresser. Or by your character model freaking out as the game tried to merge your existence with the nearby wall. I experienced no crashes or game breaking bugs though, which is always a well done effort by the developers.

In terms of sound and music, the game has chosen for subdued tones and mostly a minimalistic presence. It’s not that I’m really missing anything in this category, but there’s nothing really spectacular around either. The main theme is definitely the best part of the original soundtrack; with its combination of children’s music toys and haunting vocals. It’s definitely a more forgettable part about the game, I won’t find myself listening to it on repeat anytime soon. That said; it does a good job of setting the tone and deliver you that captivating and insulated mood which is the game’s hallmark.

It could be considered a crime to discuss game like this without touching upon its art-style. The entire experience is a phenomenal magnus opus in terms of atmosphere. With its depressing shades of blue and black, with darkness touching all corners of most scenes, it’s not exactly an uplifting game. Instead, it’s seeing the big scary world through the eyes of a child, while bitter reality and horror are also mixed in. It works great, and found myself gasping or holding my breath more than once while I was evading danger. Without too many ways to fight back, you feel vulnerable. This feeling is only heightened when being chased, and you might die a few times first because of sheer panic. It’s a different way of doing games, and you should experience it for yourself.

Little Nightmares 2 is a lovingly crafted game. Its atmosphere is unique on the gaming market, you’re not gonna find a second franchise with the same feel to it out there (though some come close). It’s the type of game you can pick up as a casual fan, or if you’re looking for a single-player experience that is just a slightly bit different. Don’t worry about having played the first game, it won’t impact your experience at all.

And while the game takes what was great about its predecessor, to expand upon, I am somewhat disappointed. The game gives you more of the same, so if the original game tickled your fancy, you’re gonna feel right at home with a new adventure. But I do feel like there were no real big surprises waiting for me. And sometimes, that’s okay. It works great as the type of game you can play after a long day of work. It’s even better with a spouse or partner to experience it together. After all, who doesn’t enjoy a good spooky fright together?